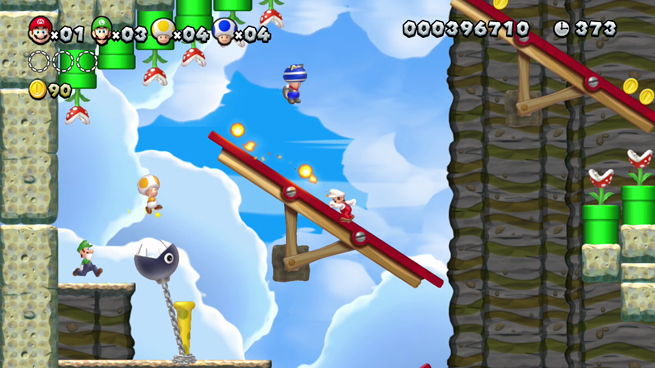 It’s a-same thing!
The formula for side-scrolling platformers staring Nintendo’s mascot hasn’t budged three inches in at least six years. On one hand, I like how dependable and familiar everything feels. The consistency across the board is highly reassuring. In form, function, and quality, Mario U fits right into the franchise, but hardly anything’s changed since 2009’s New Super Mario Bros. Wii. This franchise made a reputation on evolving its own gameplay, and outside of that Squirrel Suit, I’m hard-pressed to think of anything I haven’t seen before.

With the exception of Baby Yoshis (which needed an update from the Super Mario World model), very little in Mario U looks like Nintendo created it specifically for this game. Indeed, as far as I can tell, Nintendo almost entirely reused old assets from Mario Wii (upscaled to HD). Details found in the desert levels look disturbingly familiar. Lava flows in Koopaling Ike’s castle are identical to the magma I dodged three years ago — the last time Super Mario Bros. claimed to be “new.” Even Peach’s castle set from the opening cinematic matches Peach’s castle set from the previous game. It’s like found-object art. The pieces are all the same. Their arrangements differ.

Sure, this means the development team spent their effort on level design rather than asset creation, and the results work nicely. But that’s the hallmark of an annualized series, not a launch title following up on a 3-year-old game. Hell, another franchise from another publisher might’ve released these levels as downloadable content. It doesn’t help that when playing from the smaller WiiPad screen (which I frequently did in favor of my 52″ HDTV), you could easily mistake this for a Nintendo DS game rather than a premier console title.

That is, when you’re not confusing it with its 2009 predecessor. 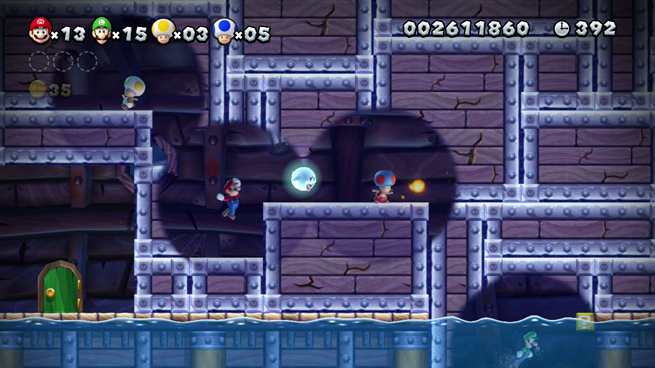 No online multiplayer
Beating a dead horse? Possibly. But with a new WiFi-capable console that wants to revise a lackluster attention to the Internet, Mario U stands out as the launch title born to be Nintendo’s flagship online-multiplayer game … except it doesn’t actually have online multiplayer, and its publisher has flat run out of excuses why.

Online matchmaking could have been the thing that truly differentiated Mario U from Mario Wii. Its absence here suggests trouble for the rest of the Wii U’s catalog. Mario Kart Wii threw together a rudimentary online mode back in 2008. We can’t do it again? Please?

I get that Nintendo wants to create experiences between people in the same room who laugh and talk and play together. That’s fine. Admirable even. But Nintendo doesn’t get that I want to create those experiences with people any time I want without having to organize a gathering of Wiimote-owning friends. That’s Nintendo’s error, and I’m worried about how much it might cost them in the long run. 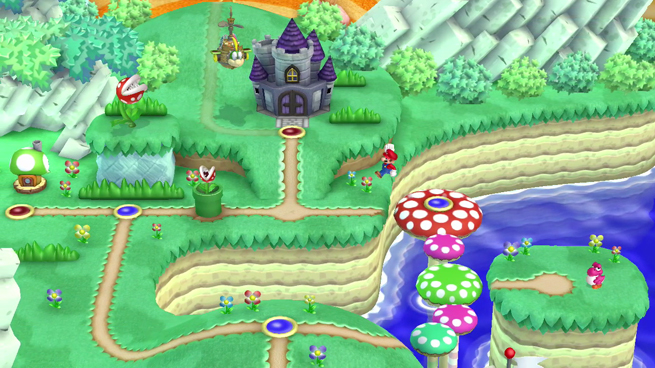 Super-easy boss fights
Here’s something that happens a lot in Mario U. You sweat through all manner of hazards — fire, gravity, or Bullet Bills — and scrape through to the end of a level by the slimmest margins only to beat the boss in under 30 seconds with exactly three jumps.

And yes, you just jump on their heads. I hear that works in real life, too.

Few of the Koopalings put up any kind of serious fight, and poor Boom Boom takes an embarrassing amount of abuse. I stopped counting how many times I pounded him shortly after I ran out of fingers. I felt so bad for Wendy Koopa that I nearly gave her a fair chance. Defeating Lemmy Koopa involves a lot of standing completely still. Yay?

In fairness, the boss fights do get a touch tougher by the end — the very end — but I never got past the gnawing sense that I was just putting these fools out of their misery. If Mario carried a sword, they would’ve leapt on it, and I would’ve let them. 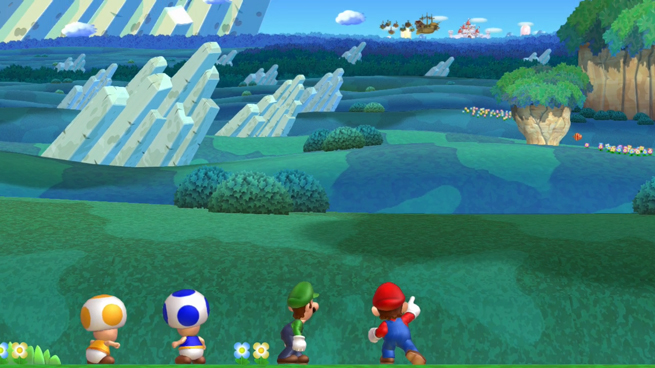 Judged in a universe where no other Mario games exist, New Super Mario Bros. U would easily be a triumph. As-is, it feels like a smaller effort, a checklist completed with recycled items. Nintendo fans will enjoy Mario U immensely, and they should. This game carries the standard proudly, offering all the smart level design, split-second escapes, and tight gameplay that creates (and deserves) such devotion. But it’s not a system seller, and it lacks inspiration. Mario U is comfort food … warm, filling, and delicious but not particularly remarkable. And Mario should be.

New Super Mario Bros. U releases November 20, 2012 for the Nintendo Wii U. The publisher provided GamesBeat with a copy of the game for the purpose of this review.