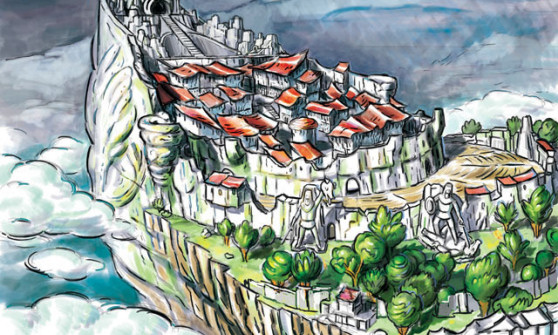 Once upon a time, a hero was born. He defeated evil, saved a princess, and then did the same thing over and over again, only more poorly.

Writer Tevis Thompson no longer thinks The Legend of Zelda is good, but he hasn’t stopped believing in it. Neither has Braid artist David Hellman or the 1,500-plus backers who pledged money to their Kickstarter campaign Second Quest, named so after the post-game challenge in the original Zelda that has since become a regular staple of the series. The Kickstarter ended tonight, surpassing its funding goal of $50,000 for a grand total of nearly $70,000.

“Modern Zeldas are broken at their core,” wrote Tevis in his essay “Saving Zelda,” which appeared in February and inspired the Kickstarter. “By modern, I mean the console Zeldas [from] Ocarina forward (though Link to the Past is not innocent), and by core, I mean their central structure and mechanics.” 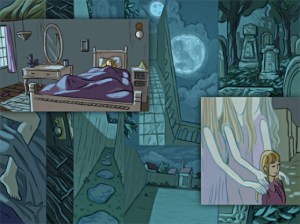 But the series still has potential, and that’s what the Second Quest graphic novella is about: giving people, including disengaged Zelda fans, “compelling worlds and a sense of real discovery,” according to the Kickstarter. It’s not about venting frustrations about The Legend of Zelda but turning them into a better vision and an original story that addresses issues in the larger game community as well.

“It’s just a roller coaster ride,” Hellman told GamesBeat in a phone interview. “It’s so exciting to launch the Kickstarter, and we had an incredible show of support immediately from friends and family and the community beyond.

“I think halfway through, we had kind of gone through that initial burst of energy, and the fundraising slowed down — as it always does with Kickstarters, it seems, in the middle,” he said. “And I think we both — being somewhat exhausted from fundraising — began thinking about what we can do for the actual art-making, which this is all for. So there was a need to shift gears there, and we both had been looking ahead while continuing to run the Kickstarter — looking ahead to the art-making, going back to that.” 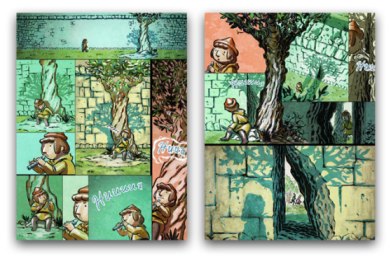 One of the things that came out of that creative reflection was the six-page Side Quest minicomic, which is releasing in December for all backers. It contains callbacks to Zelda, like a flute-playing boy and landmarks concealing secret entrances, that reflect an affection for and understanding of the games without being parody or identical to them.

“I feel like we’re ending on a great note,” said Hellman. “People are really supportive. We’re doing this live playthrough. Tevis is playing through Zelda live, and I’m drawing illustrations of the adventure as he goes, so it’s a lot of fun.”

Second Quest is unique — for Hellman and Thompson, it’s a personal project. “It’s not about being critical as much as trying to point toward something really precious that I haven’t found recently in the Zelda series,” said Hellman.

For that reason, they don’t see themselves doing this again with another troubled series. “Without our investment in Zelda, this wouldn’t happen,” said Thompson. “We not only personally have a history with Zelda ourselves but also the fact that Zelda once did the kinds of things that we come to games for. I’m critical, actually, of a lot of modern games, but I wouldn’t necessarily take the time to create something along these lines because the love’s not there. But also because [those games] never tried to do those kinds of things — that sense of adventure or a huge world to explore. Very few games have actually done that that well.” 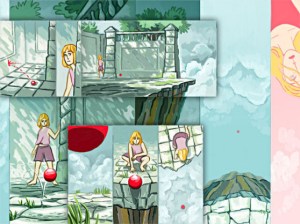 Second Quest deals with more than just Zelda, though. Thompson and Hellman have inserted their own experiences and thoughts about gaming into the comic: disintegration of franchises, female characters, the scripted qualities of games … even time spent in China. Thompson also believes that cross-fertilizing games across different forms of media and shaping those experiences into other forms, including art, is worthwhile.

“I think David and I both could see a future of making art out of video game experiences but not necessarily this kind of project,” he said.

Thompson and Hellman largely contribute their success to a combination of preparation and support from the community as well as fortuitous events. Kickstarter chose their campaign as its Project of the Day in their second week, which brought in more interest.

“I feel like at the end of the Kickstarter, now I know how to do a Kickstarter,” said Thompson. “Now I’m really ready to do one even though we just did it. We’re not making it up as we go along — we had a lot of plans. But some of them just went out the window once we saw what was working and what wasn’t.”

Figuring out how to communicate their passion with others and explain the campaign was a big obstacle, but it was also key to gaining an audience. Getting people on board also helped push the campaign in the right direction. They’re now working with Fangamer, which is handling physical production and fulfillment for Second Quest.

“It kind of ends up being a lot of people helping out, and it’s really something to have a success and to know that it’s because of so many great contributions from other people,” said Hellman.

The 50-page, full-color hardback of Second Quest releases to contributors in October and to the public in late 2013.