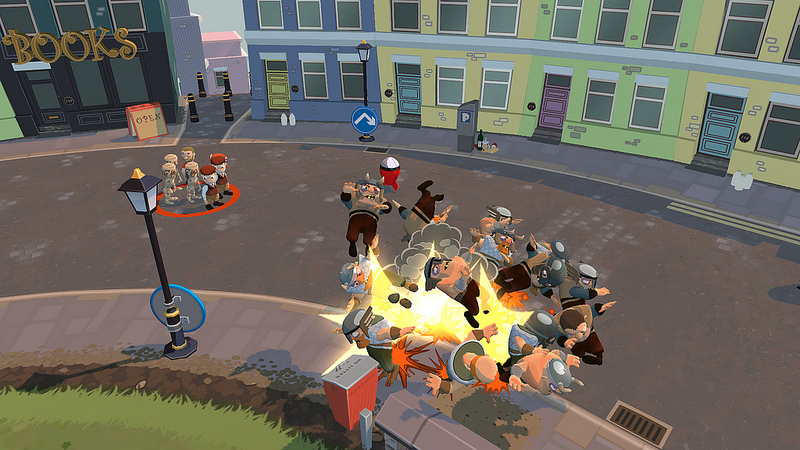 Grab your giant donut or ice cream truck and get ready to stand up and throw it for your country. Vikings are attacking, see, and it’s up to the citizens of 1970s Britain to fight back. With the assistance of The Department of Vikings, you must guide your little vigilante circle around increasingly wacky environments like The Farm, The Pipe Factory, The Museum, Up On The Roof, and, ultimately, Viking Island itself.

In a world full of cinematic gaming opportunities, it’s a delight to play something that is just a lot of fun. When Vikings Attack, by Clever Beans software, is a joyful playspace dedicated to funny sounds, goofy gameplay, and furious multiplayer battling. In short, it’s the wonderful chaser to all those huge, costly triple-A titles you have on your PlayStation 3 already. It’s also available via the PlayStation Network in an on-the-go version for the PlayStation Vita.

The controls are responsive
When Vikings Attack plays like a brawler, only instead of beating the enemies up, you’re tossing improbably large objects at them. Your health is cleverly represented as the number of little folks in your colored circle. The vikings toss objects and bombs back at you as well, culling your mob of cutesy little village and city folk. Moving your little group of vigilantes about the screen feels good. They dash, turn, and throw stuff easily and quickly whenever you hit the right button.  The learning curve is brief, and the levels designed to allow you to build your muscle memory for each type of control. 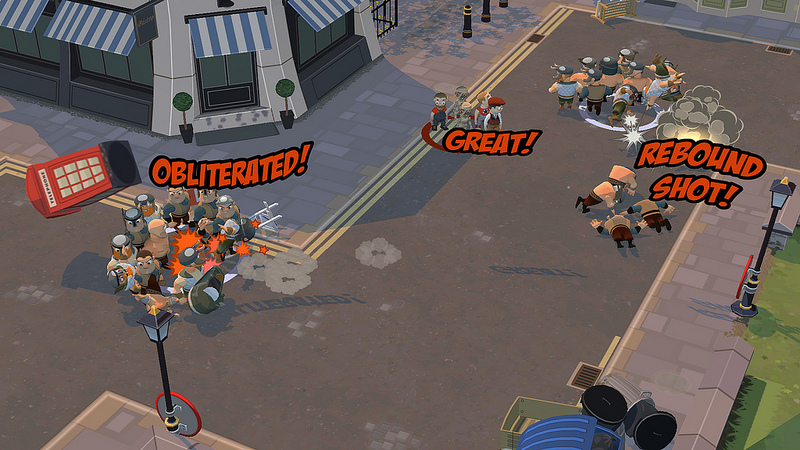 The art style and audio sparkle

The whole 1970s Britain theme is adorable, as are the chubby little vigilante characters and horn-wearing vikings. You collect new characters as you move through the themed environments, which have their own specific objects for throwing: shopping carts for the grocery store, planets and spaceships for the museum, and giant donuts at the fair. It’s whimsical and wacky.

The sounds of the little characters picking up different objects is laugh-out-loud funny, with vocalized grunts and “heyUP” sounds everywhere. When you make a particularly good shot, text like “Textbook!” “Good Show,” and “Cracking Good Shot” pop on the screen. My 10-year old son picked these up, repeating them aloud as we played through the entire game together.

It’s surprisingly strategic
At first, beating a level is a matter of tossing as many objects as possible, as fast as possible, at the advancing viking hordes. As it moves forward through its 15 levels, however, the surroundings become as much an opponent as the vikings themselves. The Sorting Office has what feels like miles of moving conveyor belts and buttons that you activate with well-timed shots to start, stop, or reverse direction of the moving walkways. A couple of levels, notably the Pipe Factory and Viking Island, have two players synchronize tactics to direct ordinance toward their foes.

The  three different types of bombs create a deeper gameplay strategy. One type explodes on impact, another bounces off walls and into enemies, while a third type convinces vikings to become vigilantes — or vice versa. Some characters give your mob extra skills, like moving faster, lifting heavier objects than your group size can handle, or throwing things a bit faster. Using these bombs and buffs adds another layer of strategy to single and multiplayer games.

These are instructional films worth watching
Tremendous amount of silly, dry, British humor is on display in When Vikings Attack. The instructional films, each introducing a new element of gameplay or explaining new types of items or environments,  feel like old Cold War public service announcements from the 1970s in Britain, though “The Department of Vikings” made these. They’re fun to watch even after you’ve gleaned the info you need.