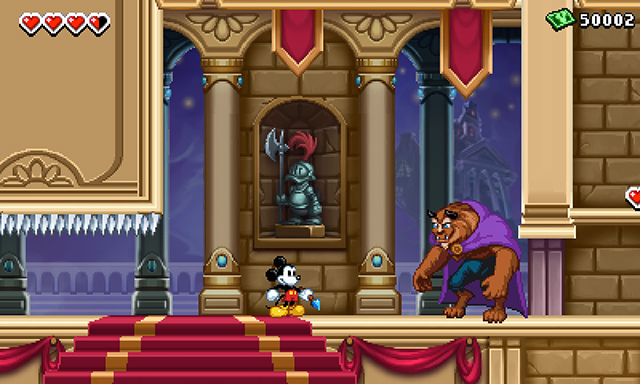 The dreaded portable spin-off is the bane of many a gamer. You know what I’m talking about. When a major console release is coming up, a publisher often finds some second-rate developer to put together a sloppy portable version of the game that can launch on the same day. This is how we get things like Call of Duty: Black Ops: Declassified.

So I could forgive you if you’ve ignored Epic Mickey: Power of Illusion, a Nintendo 3DS game launching Sunday, the same day that Disney releases Epic Mickey 2 for consoles. But I will not tolerate your ignorance any longer! Power of Illusion is a game worth noticing — especially for fans of Disney and 2D platformers.

Old school platforming with new school tricks
Despite the Epic Mickey branding, Power of Illusion takes most of its inspiration from Castle of Illusion Starring Mickey Mouse, a 2D platformer for the Sega Genesis. Just like in that 1990 sidescroller, when you push the jump button again in the air, Mickey preps his mousey tush to bounce off his enemies. Time the attack right before contact and you’ll jet higher into the air, letting you access hard-to-reach areas that usually contain the best rewards. It’s satisfying when you properly butt-bounce your way through a level. I’m also immature, so the fact that I’m butt-bouncing constantly amuses me.

Power of Illusion also takes some cues from the Epic Mickey console games, notably with the ink-and-thinner mechanic. In the original Epic Mickey for the Wii, Mickey uses a magic brush to paint or erase objects in the world. You can do the same here, but instead of aiming and shooting a stream of paint, you tap on certain objects or characters outlined on the system’s bottom screen. You then use your stylus to draw or erase whatever is shown.

Having a hard time avoiding a cannon’s fire? Just erase it. Can’t reach the nearest edge? Then you can probably draw a moving platform to help you get there. You can use this system for some creative techniques, like removing a net hanging from the top of the screen so a canon ball can fall on top of Captain Hook. Also, it actually matters how well you draw. For example, if you only do an OK job painting a box into existence, then the game will cover half of it with spikes. It’s a delightfully clever use of the system’s touch screen. 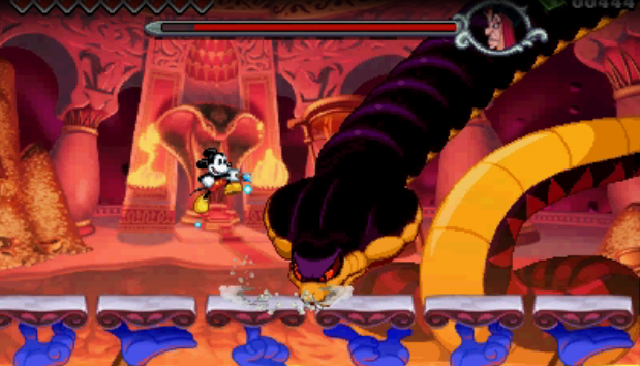 You can also use paint and thinner for ranged attacks. Enemies that succumb to paint are more likely to drop health while thinner more often rewards you with tickets, which you can use to buy upgrades.

These diverse tricks give you plenty of options for passing through the levels, and you’ll likely need every last one of them for some of the more challenging stages at the end. More importantly, they’re all incredibly fun to use.

Expertly designed
Developer DreamRift created stages that offer fantastic playgrounds for bouncing, painting, and thinning. Levels often branch into multiple paths, with the harder-to-reach areas offering more difficult challenges but also more prizes. I never experienced a cheap death — you know, like a cannon shooting me into an inescapable hole.

Not that you won’t die. Power of Illusion has an appropriate difficulty curve (something of a rarity these days). It becomes more difficult the further you progress, encouraging you to spend some time collecting tickets so you can upgrade your abilities. You’ll only get one checkpoint during a level, so you can’t just willy-nilly your way through a stage on autopilot. If you die, you’ll have some ground to make up, and I wouldn’t have it any other way. This forces you to actually play smart and learn from your mistakes.

Power of Illusion also looks gorgeous, with colorful character sprites and vibrant backgrounds. The music is also delightful and offers a few homages of its own to Castle of Illusion.

The gang’s all here
Disney characters litter the levels, ranging from old school guys like Donald Duck to new folk like Rapunzel. When you find one, he heads back to the “fortress,” where you can then go to talk, complete quests, and ultimately receive rewards. One of the first characters you find is Beast from Beauty and the Beast. When you first visit his room in the fortress, he wants you to paint his rose back into existence. Then, he tasks you with rescuing his friends from one of the levels. In exchange, you receive more tickets or upgrades for things like your attack power and health.

Some toons give you stamps, which let you draw a certain object (like a block) anytime you want or summon a character. The best is Uncle Scrooge, who bounces around the screen on his cane in a brilliant homage to Duck Tales for the Nintendo Entertainment System.

Disney nerds like me will love seeing Mickey interact with this large cast of all-stars, and the substantial rewards make the effort of finding these characters and completing their tasks more than worthwhile. 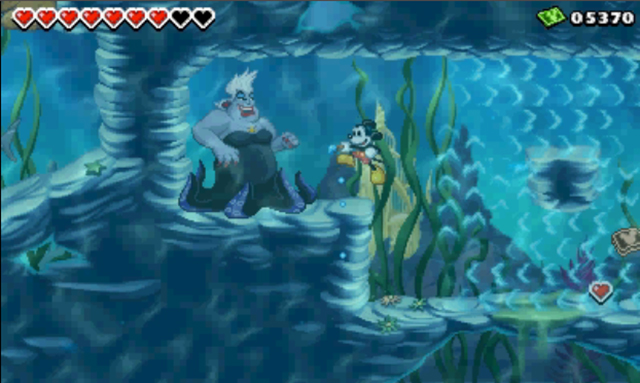 Length
Sadly, Power of Illusion isn’t a long adventure. It took me about five hours to beat the game. It does give you reason to go back through old levels to find more characters and retrieve items for quests, but I was really wishing for more worlds to explore.

Only three movies serve as inspiration for the game’s stages: Peter Pan, Aladdin, and The Little Mermaid. This also means you’ll fight only three bosses, which is a shame since these are some of the best moments. I would have liked to have seen more variety.

OK, so I wanted more, but I really don’t have any complaints with what I played. Power of Illusion is a delightful, engaging, and clever tribute to one of Mickey’s greatest games. In many ways, it surpasses the original Castle of Illusion. In fact, this is the best title starring Mickey in years.

Ah, the hell with that. This is one the best 2D platformers I’ve played in a long time. Yes, that includes any with game with “Mario” in the title.

Epic Mickey: Power of Illusion comes out on Nov. 18 for the Nintendo 3DS. The publisher provided GamesBeat with a copy of the game for the purpose of this review.