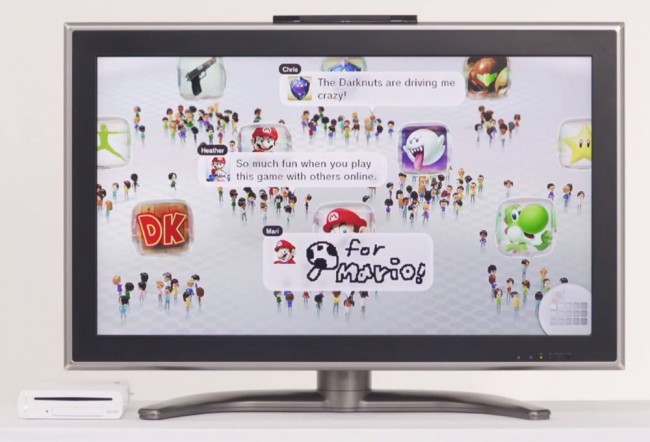 The Miiverse is the Wii U’s main community hub for connecting and communicating with other players. If you’ve avoided joining Facebook and Twitter like the plague, I’ve got some bad news: The Miiverse functions like both. With message boards!

Everything centers on Communities, game-centric message boards you can post in and, if you really want, mark as a favorite to “join.” The two big cool things about posting in the Communities: First, you can doodle images or write messages with your stylus instead of using a dull ol’ keyboard. The Scribblenauts Unlimited Community is already showing serious artistic chops, too.

Second, depending on the Profile settings, you can see who’s actually played the game. The Miiverse reads the saved data off the Wii U hard drive and gives players a little checkmark, and that equals instant credibility, my friends. Naturally, you can respond to posts or simply “Yeah!” them — the “Like” button of the Miiverse. Any “Yeah!” clicks your posts earn show up under your Notifications tab.

You can also follow someone or send them a friend request from their profile page in the Miiverse. Either sends every post they make to your Activity Feed, a Twitter-style timeline, and you can message confirmed friends. That comes with a 100-character limit, so already it’s more hardcore than Twitter. Oddly, you get a 63-character limit for messages sent with your friend requests. Why 63? No idea … because it’s divisible by 21?

But before you can send any friend requests, you must set up your Friend List. Nothing in the Miiverse tells you what this is, but Nintendo has every confidence you’ll figure it out on your own.

Hit the Home button. Friend List is the cheery orange smiley-box on the far left, and I’m afraid I want it to die. You might send out friend requests from the Miiverse, and you can even look at your Friend List from your Profile there, but Nintendo insists you come over to the Friend List for nebulous reasons. And you must set up your own preferences here before you can send out any requests at all. Oh, and the Friend List doesn’t even show up on the Wii U’s Channels dashboard like the Miiverse, eShop, Internet Browser, and TVii do. So what the hell is it for?

Aside from that quick, easy, one-time profile set-up (some of which repeats over in your Miiverse Profile), the only features here let you send a request by entering a Nintendo Network ID and track players you’ve recently played with … not just friends, but everybody. You can send them friend requests with a few quick taps.

Splitting out minor functions from the Miiverse — where you’ll do a lot of your connecting — then A) not explaining it and B) hiding it half the time adds up to a major user-interface misstep. I’m already counting the days before Nintendo votes Friend List off the island with a firmware update, but forgive me if I vote a little early. And often.

Certainly, the new eShop feels more accommodating than the old Wii Store and far more in line with the look and feel of other download services. The GamePad makes accessing and buying anything you want an iPad-like breeze … so long as you’re using a stylus. Once again, the resistive touchscreen doesn’t play well with your biology, and with so many clickable items on the page, odds are you’ll careen off into content you simply don’t want so long as you insist on finger-swiping. The eStore also encourages all resident Nintendaddicts to opt into SpotPass updates and link their Club Nintendo accounts. That’s good integration, right there.

And, of course, Nintendo showed Wii Points the door in favor of American greenbacks (at least in the U.S. market). That leaves Microsoft’s Xbox Marketplace as the last holdout in the fake currency arena.

It’s always annoying to see digital downloads priced the same price as retail discs, but an impressive number of launch titles (including New Super Mario Bros. U and ZombiU) feature prominently in the eStore, I’m also gratified to see indie games getting a place at the table, and right below the headliners, too. Less gratifying, the “More Indie Games” either isn’t a link to more indie games, or the link is broken. Or possibly they only have those three titles up on the eShop at present. Games by Category section also feels thin … for one thing, indie games isn’t one of the four categories (Action, Party, Sports, Something for Everyone).

Design-wise, the eShop looks cleaner than the PlayStation Store but not quite as slick as Xbox Live Marketplace. Of course, it also suffers from a limited selection, so some of these problems will hopefully go away in the next few months.

For a company as endlessly creative as Nintendo, “Internet Browser” seems a bit pedestrian. That said, Nintendo just can’t get away from being cute. While your GamePad screen shows bookmarks and search fields, Internet Browser throws red theater curtains up on your TV and invites you to open them by pressing the X button. If you don’t, your Mii shows up to do magic tricks. I just watched my cartoon doppelgänger pull a pigeon out of top hat. Then it wanted to play Rock-Paper-Scissors with me. It’s not exactly a Google Doodle.

The X button just puts the GamePad image up on the big screen without any fanfare whatsoever.

Internet Browser does a nice job, overall. You’re better off using the stylus to scroll on the GamePad’s resistive touchscreen, but the Wii U scales images, video, and text from the pad’s screen to my television nicely. I’m actually reading this article on my Sharp HDTV from a good 12 feet away, and everything looks very crisp indeed. It’s also Flash-compatible, so grade the decent load times on that curve. Zooms and contracts are done with the + and – buttons (physical or touchscreen) or the right thumbstick. The left stick scrolls the page, as will swiping the touchscreen.

I did need to refresh several times when images didn’t load properly or a page froze. Those seem more like growing pains than real faults. Internet Browser, like then name suggests, isn’t fancy, but it gets the job done and offers a smooth control interface to boot.

If you want a sense of how just ambitious Nintendo went with the Wii U, look to Nintendo TVii. It’s their full-frontal assault on the Xbox 360’s throne as the all-in-one entertainment device, and while it might not have deals to run HBO Go or NBC News, the feature set potentially (and arguably) outstrips those advantages. TVii, we’re told, will not only stream content from Amazon Prime, Hulu, and Netflix but live television as well, with built-in digital recording for fans of time-shifting their TV.

Nintendo’s never done anything like this before, and it could be a good game-changer for it. But launching TVii brings you to this message in English, French, and Spanish;

“Nintendo TVii will be available in December. We look forward to seeing you then!”

We also don’t know which cable providers will support TVii or to what extent. We’ll just have to wait and see what Santa brings.

Maybe Nintendo couldn’t decide where exactly to place the Wii U’s video chat feature, because it shows up in some menus and not in others … and it gets its own channel on the main page. That’s generally the easiest place to launch it.

You can call anyone on your Friend List, transmitting live video and sound from the Game Pad. It’s Skype on the big screen with a Nintendo touch, starting with the presentation. When your call connects, your image fades in watery ripples exactly as if you were experiencing a flashback scene on TV. When it clears up, your fellow caller comes up like a grainy memory. The picture is Skype quality, no better or worse, and I experienced a fair amount of lag and frozen images during a twenty minute call, though sound still came through strong. With any luck, that will calm down once Nintendo’s servers get past the launch-day strain.

It’s simplicity itself to switch the images between the Game Pad screen and your TV, but let’s not kid ourselves … you can draw on the video image you’re watching by clicking the pen icon in the upper left corner, and you will abuse this feature mightily. Callers can, of course, see how they’re vandalizing each other’s image and retaliate in kind. You can also erase all or part of your graffiti without much trouble. This all works best with the stylus.

Using the Game Pad’s camera while it rests in one of its cradles is a bit more of mixed bag. Both cradles tilt the pad — and thus, the camera — up slightly. Sitting on a couch at a distance of about ten feet, a viewer could still see me, but got an even better shot of my wall and ceiling. That seems like an odd oversight, design-wise. It’s better to hold the Game Pad as if you were Face Timing with your iPad.

When you finally hang up, a message pops up telling you to wave goodbye, and the image fades to white as if you’re waking up from a dream. Hopefully a good one. Wii U Chat works well enough to recommend, but dedicated Skype and Face Time users don’t have much to feel envious about.