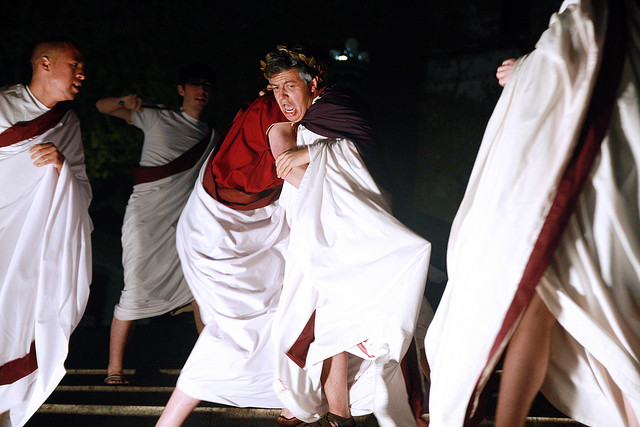 Like Emperor Julius Caesar, BritRuby was brought down by white males and the Ides of March.

Scheduled for March 15 and 16th of 2013, this event which planned to bring together members of the global Ruby on Rails community for a summit in Manchester, England , is now canceled.

The intent was to hold a two-day conference with 500 developers and 20 speakers. A post on the company’s web page announcing the cancellation focuses on making apologies, rather than the details of the decision, and makes a few vague references to issues of race and gender equality.

“The Ruby community has been battling with issues of race and gender equality,” the post said .”We at BritRuby were well aware of this fundamental and important issue. This was one of the reasons why we encouraged everyone to submit a speaker proposal. Sadly, BritRuby was used as the arena to air these issues on Twitter and this has fundamentally destroyed any chance we had of addressing these issues. Instead the community should have worked together and allowed us to bring these issues to light at the conference. How can the community address these issues if every time someone tries they are shot down and accused of such awful things?”

A foray into the Twitter-verse revealed negative commentary because the speaker line up was entirely comprised of white males. The organizational team responded to these comments by saying they could not find qualified speakers outside the realm of white male. Debate ensued surrounding issues of discrimination, sexism and racism in the technology community, and whether it is better to have a “token female” or people without strong English abilities speaker, simply to diversify the attendees.

The decision to cancel the entire event seems dramatic, considering it its based primarily on a few negative tweets. Now, no-one of any background will be able to benefit from the events’ intention, which was to “to encourage Ruby developers to unite and create a community, which would allow such to network, exchange ideas and provoke innovation for the future of Ruby. We wanted to encourage jobs and allow companies the opportunity to meet the community and primarily boost the UK developer industry.”

It is quite a blow, for a startup economy that is just starting to take off. Perhaps the founders of BritRuby should pivot and hold an all-female hackathon. Than for BritRuby 2014, they may have a better chance.