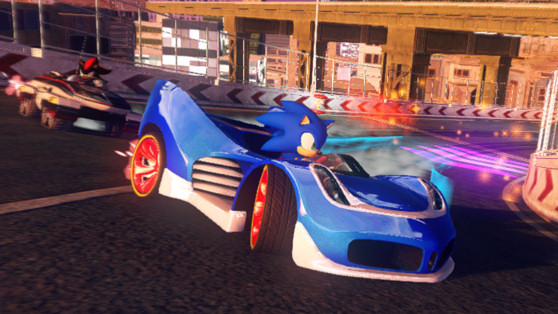 In the kart-racing world, Mario is the unconquered king. Some challengers (such as Crash Team Racing and Diddy Kong Racing) have come close, but ultimately, they eat the plumber’s dust. They vanish, and Mario Kart — the series that has inspired so many racers like it — continues to lead the race year after year with new sequels.

Mario Kart’s success comes down to its top-notch mechanics, colorful tracks, recognizable characters — and how fun it is. While Sega’s cast isn’t as popular as its Nintendo rivals, Sonic & All-Stars Racing Transformed (out today for PlayStation, Xbox 360, and Wii U) does something that Mario Kart often neglects to do: move forward and think deeper.

Smart designs that improve and streamline gameplay
Truly overtaking Mario Kart’s formula is probably impossible at this point. We’re so used to its picture of what a kart racer should be that we have trouble accepting any deviations from its norm. Leave it to Sumo Digital, the maker of 2010’s well-received Sonic & Sega All-Stars Racing, to find little ways to innovate on the essentials.

World Tour is the main campaign in Career mode, and you’ll mine at least 8 to 10 hours out of its five interconnected maps (not counting the bonus tour that unlocks after the credits). You travel along a linear track, playing races and other challenges as you go, until you reach a branching path and can choose which course you want to attempt next. It’s a simple but more interesting way to present a long series of races. 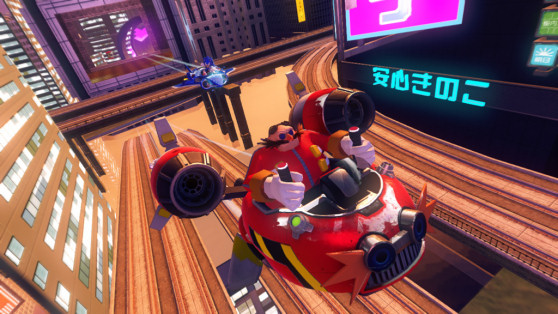 Beating tracks on each of the three core difficulties — Easy, Medium, and Hard (and later Expert) — nets you a corresponding number of stars, and earning more enables you to pass through gates to new areas and unlock characters. You can clearly identify spots for extra characters on the map and read their names once you get to them, but as long as you have the required number of stars, you can access them and anything else you need. It won’t lower your total star count, either. You unlock some drivers in different modes, too, but you can at least learn where you do so by looking at the blank slots on the character select screen.

Sonic & All-Stars Racing Transformed also cycles through a nice-sized collection of tips on the loading screen, which helps acclimate the player to the different power-ups and controls available. This should come easy to anyone who’s played Mario Kart or other games in the genre.

Deep racing gameplay is full of great features
The announcer is a little overbearing on the menu screens, but during races, he’s helpful. He tells you what power-ups you receive so you don’t have to take your eyes from the road — giving you an extra second of time that you can always use. This happens in multiplayer as well, but it’s not confusing when you hear the announcer gab about another player.

You can hold two items at once during a race as long as you switch one into your reserve first. [Update: Although we never noticed this during our playthrough, Sumo Digital has alerted us that this feature is called a “swap slot.” It’s only available in split-screen multiplayer. While you can hold and use two items in sequence, the second item also appears in the other player’s swap slot. Either one of you can then claim it by pressing B, which lets you work cooperatively to win the race or event challenge. This sounds like a clever addition that the game never makes note of, but it doesn’t seem advantageous if you’re racing competitively.] In addition, little symbols appear next to a driver’s name, indicating what item he’s currently holding. This is key to knowing when to drive defensively or to close the distance. 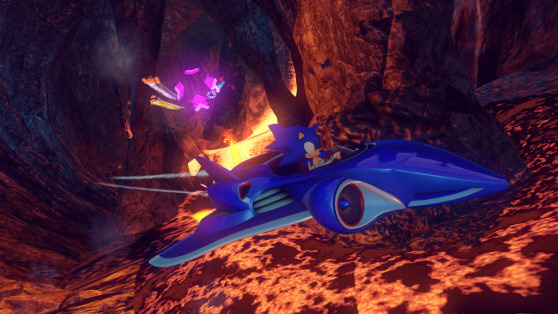 Sonic & All-Stars Racing Transformed’s items are recognizable variations on Mario Kart’s staple inventory, but little tweaks to how they work make them even better. One of my favorites, Swarm, has the same basic function as the notorious Blue Shell: It targets the first-place player. However, you can also direct the Swarm backward, and it doesn’t just endanger the player in the lead. It releases a cluster of giant bees on the track, so anyone who encounters it before it disappears has to maneuver through it without hitting the insects. Another power-up, the Glove, protects you from taking a single hit and also “catches” and fires back enemy shots.

Whether you succeed or fail, completing tracks gives you experience points that level up characters to a max of five (a good incentive to play as them), unlocking mods for their vehicles in the process. These change how a vehicle behaves, altering its performance in speed, acceleration, handling, boost, and your All-Star power, which is unique to each character. Activating an All-Star power-up during a race transforms your vehicle into its ultimate form. It’s like getting a star in Mario Kart, and it renders you invincible for a short time. But you can also attack opponents using your special shot, which is unlimited for that brief time.

Speaking of transforming, your vehicle automatically changes into a car, boat, or plane as you progress through the course. All you need to worry about is finding the quickest path possible — you’ll almost always want to fly when you have the option as it’s the fastest mode of transportation. If you happen to fall off the edge, don’t fret. It resurrects you and puts you back on the track almost immediately, a record for kart racers. 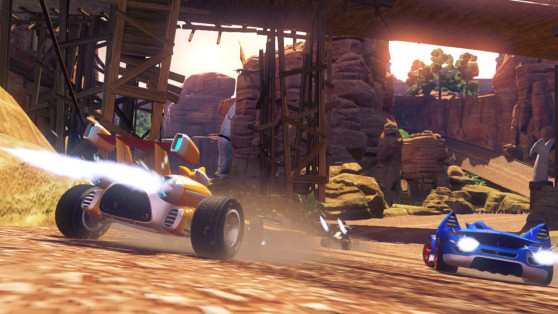 The actual gameplay works how you’d expect: On the Xbox 360 (the version we reviewed), the A button launches items, the Right Trigger accelerates you forward, and the Left Trigger — in conjunction with the gas — drifts. It’s natural and not finicky like in other kart racers, and you can easily switch the direction of your drift without losing steam. The longer you maintain it, the more powerful it becomes.

Multiplayer is the true experience, not an accessory
Nearly everything in Racing Transformed is multiplayer-friendly. The main menus constantly flash tiny icons at the bottom of the screen that invite up to three additional players to join the game. They can participate in almost all of the modes, including the Career modes, which are traditionally single-player affairs in kart racers. This is the game’s greatest asset. The races and events are more challenging than you might expect even on the default difficulty, so it’s a blessing to have a second (or third, or fourth) player helping you to complete them.