You can also collect tokens while you’re racing and spend them in a Casino, which appears on the World Tour maps or on the loading screens in multiplayer. Paying five tokens to play the slot machines can earn you bonuses for the next race, such as an Ice Shield that diminishes the effect of enemies’ ice shots.

Apart from the splitscreen and Casinos, just because you’re playing with others doesn’t mean the gameplay changes. You level up characters the same way, and as long as one of you meets the conditions for winning, you’re set. So you essentially double you chances of success if you play with one other person. And since Racing Transformed offers a huge variety of different race types, one of you might be better suited to a particular challenge. Even though I’ve hated ring races ever since the original Spyro the Dragon, I’m awfully good at them.

But if you thought this Sonic was about pure racing or even racing in different vehicles, you’ll quickly discover that it has a lot more going on. Sometimes its challenges are about boosting, and sometimes they’re about arena-based gameplay — or surviving waves of traffic (Traffic Attack), drifting successfully in a lane (Drift Challenge), gunning down a tank (Pursuit), beating a ghost’s time (Sprint, which is easily the hardest type), and so on. 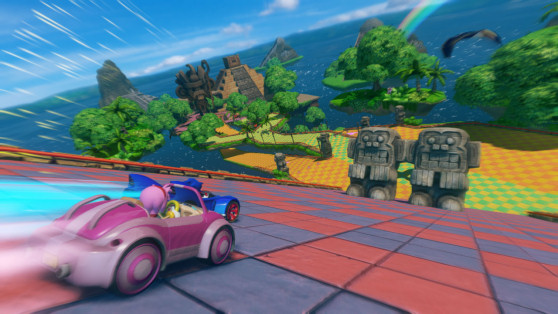 Even when you’re not exploring World Tour, where all of these styles are available, you can engage in other forms of multiplayer: a local/online match, a private session with your friends via network, single races, custom games (multiplayer challenges and races), or cups in the Grand Prix. The only one that’s limited to single-player is Time Attack.

What’s also most surprising is that Racing Transformed features no story whatsoever, and it’s better off without it. This is about gameplay, not forcing a half-meaningful plot on a band of characters. Instead, the focus is on the experience.

Awesome tracks with creative, exciting environments
In any kart racer, you have tracks you love and tracks you don’t much care for. Racing Transformed puts forth a good effort at making its courses visually impressive as well as fun and engaging. Each new location is from a handful of Sega games like Sonic the Hedgehog, Nights into Dreams, Golden Axe, Super Monkey Ball, and Panzer Dragoon — and they’re wonderfully realized. Attention to not only the race but also the place you’re racing through is crucial to making a good kart racer. But unfortunately for Racing Transformed, the variety stops too soon.

Dwindling variety of locations
As cool as the tracks are, by the time you’re halfway or so through the World Tour, you’ll wish the designers had created more — or at least spread the existing ones out better. The tracks overlap for races and event challenges, so you’ll know the locales pretty well by the time you’re finished.

A few oversights with vehicles and multiplayer
Making multiplayer so accessible and understandable was a great move, and so was incorporating vehicle transformations seamlessly into the gameplay. But these features could have been made even better with, first, a more personalized custom game — with options for adding player choices for items and other restrictions, like artificial-intelligence players or a time limit  — and second, better control in the water. Steering a boat is unfortunately one-third of the gameplay, and it’s frequently bouncy and cumbersome. Every time you hit the water, you’ll pray you don’t splash all over the place and screw yourself over. You learn to cope with this mechanic the more you play, so it’s not a crippling fault. But it is annoying. 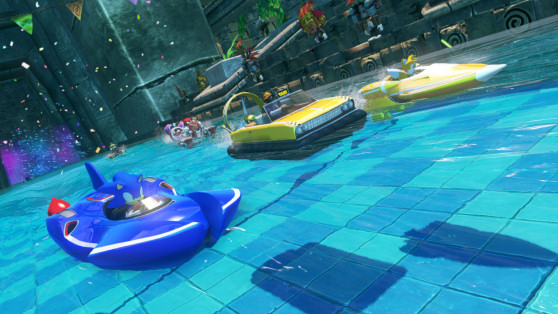 Stunts is another element of gameplay that’s underdeveloped. Racing Transformed makes a brief mention that you can flick the right stick midair to barrel roll or flip and get a boost at the end, but it’s one of the few things in the game that feels slapped on.

A little glitchy
Nowadays, it seems like every game ships with its share of glitches. Racing Transformed’s problems mostly are in the multiplayer. You’ll see the occasional wonky lighting effects on cars on the results screen or missing patches of environments far in the background. My controller also wouldn’t stop rumbling a couple times. While these issues usually aren’t too detrimental, sometimes they can cost you a race. You can get stuck on parts of the track or completely slow down.

But sometimes glitches work in your favor. The biggest bug I encountered occurred was when the player sitting next to me flew off a building and actually cheated the game by jumping into first place — and two laps ahead.

Sonic & All-Stars Racing Transformed delivers huge value at a generous price: $40. If all you want is racing, you might be disappointed when you learn everything that awaits you, but it’s easy to appreciate the wealth of multiplayer options, the smart gameplay and design, and how well it all comes together. If you’re tired of Mario Kart after Mario Kart, Racing Transformed is a fresh approach.

Sonic & All-Stars Racing Transformed was released for the Xbox 360, PlayStation 3, and Wii U on Nov. 18. The publisher provided GamesBeat with an Xbox 360 copy of the Bonus Edition for the purpose of this review.