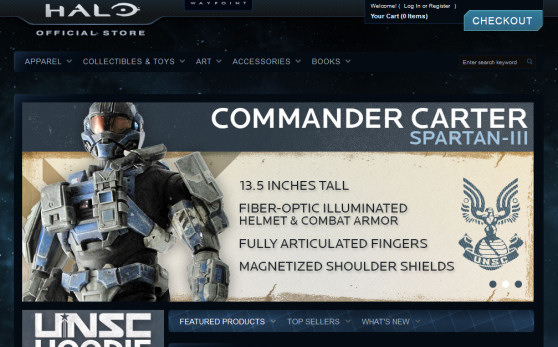 Back in August, EA worked with Treehouse Brand Stores to launch a new store for its subsidiary PopCap Games and one of the casual-game developer’s hottest properties, the tower-defense title Plants vs. Zombies. Now, that partnership continues as the two companies establish an official EA website that carries products from its individual stores. These include Mass Effect creator BioWare, American McGee’s dark twist on Alice in Wonderland, PopCap, and Dead Space studio Visceral Games. Treehouse also made stores for Microsoft’s popular first-person shooter Halo and Skyrim developer Bethesda (coming later this year).

Together, these companies are doing video game e-commerce right and putting the attention where it needs to be: on the brands and the people who love them.

A different kind of consumer

“Basically, the idea was there were lots of really cool brands — particularly in the video game space — that were not getting any love at retail,” Jed Seigle, the chief executive of Treehouse, told GamesBeat in a phone interview. “And if they were getting into Target or Hot Topic, it would just be a logo slapped on a shirt, and it was shitty quality. So we essentially went to these video game publishers and said, ‘We’d like to build your official store, and we’ll design products that are going to be targeted not at the lowest common denominator but more the fans who really play the game.'” 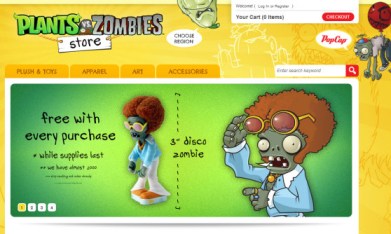 Brennan Townley, the director of brand licensing at PopCap, spoke to GamesBeat previously about the Plants vs. Zombies store. He more recently told us, “With the Treehouse model, we can react quickly to new trends, fan feedback, and developments within our game,” said  “Ultimately, it allows us to put out great product and reach our broad fan base in a meaningful way.”

Seigle explained that when game companies try to run their own online stores, they often don’t have the time to do them right. Treehouse relegates these efforts in a way that pays off and better serves the fans. These stores then become home to not only the publisher or developer’s products but also other licensees, allowing customers can find everything in one spot.

Selling brands in retail — at brick-and-mortar stores like Wal-Mart — works differently than e-commerce. “Those stores have very limited floor space, so if you’re willing to create an item, it’s gotta be really, really explicit about what that’s about,” he said. “Which is why you get Call of Duty or Mass Effect or Halo — basically a marketing logo and image or box art slapped on a T-shirt. There aren’t hoodies. There aren’t hats. There aren’t sort of cool, custom pieces.”

E-commerce stores weren’t always immune to this problem. “When you started getting some of these online stores up and running maybe six, seven years ago, it was basically logo-slapping,” said Andi Riordan, the president of Creative Minx Marketing, who is representing Treehouse on the Halo Waypoint Store. “A lot of them were unauthorized. There were a lot of cease-and-desist letters that went out. And so what happened is, what we liked [about] Treehouse — it wasn’t just T-shirts going up on a store. They really took their unique approach to come in and to make sure to work with the games teams and to become part of the community and address those consumers. Not to cannibalize the product that was going to go out on a retail level, but instead come up with different product that was addressing an additional consumer that was buying these games.” 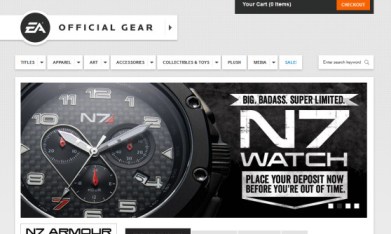 “These fans invest so much time in these games,” said Seigle. “But they’re also fairly savvy. I would never wear a T-shirt that said Mass Effect across the chest, but I’d definitely wear my N7 hoodie with the N7 emblem and the stripe. And that type of stuff doesn’t work in traditional retail. Because we’re smaller, because we’re online, I don’t have to do 10,000 of a design. I can do 200 or 500 to see if it works. So we really cater to the most passionate fans, and I think that’s the reason why our stores have been successful and why it’s harder to do it in more traditional retail channels, particularly the apparel section.”

Getting the most out of online stores and communities

The benefits to e-commerce, besides putting more fan-oriented products (novels, statues, replicas, apparel, and so on) in one place, is to make sure the quality is high and that it’s priced correctly, said Seigle. It also allows companies like Treehouse to offer a greater range of products and act as a significant retail channel for other license partners. “And that allows them to take more risks and do more products,” he said.

“We’re always cognizant of having new and interesting product,” he said. “As it relates to the types of products and the designs that go in, we have a design team here, and almost everybody at the company plays games. … A lot of the ideas we come up with [are because] we spend a lot of time playing the game. Because if we’re going to folks who are really committed and themselves spending a lot of time, we have to do that, too. There’s no way to sort of get yourself immersed in the universe and in the lore around the game unless you spend a lot of time playing it.”

Ideas come from within the games — for example, items like a watch that Isaac Clarke wears in Dead Space — or from the communities. Siegle said they’ll engage with forum members and other gamers online to find out their favorite quotes, moments, iconography, and what they’d most like to see out of a product. 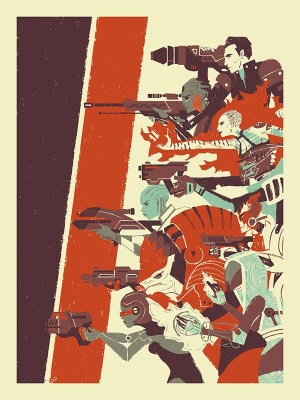 “The purchasers of online store products tend to buy higher price points,” said Riordan. “They’ll spend 40 or 50 bucks on a T-shirt, but they want it quality, they want it cooler, and they don’t want something that then 80,000 units are being shipped out to a midtier or big-box retailer.

“What the [development] teams tend to love — you have to also make sure to do that additional research and take those extra steps to know that that is in conjunction with what the consumers will actually buy and actually wear. There might be a team who thinks, ‘God, this is the greatest design ever.’ And this is their baby. But it might not sell at retail — ie., a brick and mortar shop — because they might not get it. It might be a more casual gamer.”

Appealing to a core consumer, who would shop online, means listening to what people are most highly anticipating and marrying that to what the team has in mind, said Riordan. It’s a balance between accessories, apparel, and cool, detailed products. “So it’s a very thoughtful and strategic process that you want to go to.”

Riordan believes this is a huge, untapped revenue stream, but it’s not something that replaces brick-and-mortar retail. “It complements it because it’s two difference audiences that you’re focusing on,” she said. Younger gamers might not want to spend $40 on a T-shirt online, but they’ll spend $14 on one at Wal-Mart and then spend the extra money on something else.

“Your online consumers and your PC gamers with certain games tend to have a little bit more money, and they’ll spend more money,” said Riordan. “You need both audiences.”

What the target audience thinks

One gamer we spoke to sees the situation somewhat differently. “As far as official brand stores go, I enjoy the products, but prices are so often far too high — as well as shipping costs — to justify anything but the best products being purchased,” said 32-year-old Jeff Yenzer, who we contacted via Twitter and email.

But his concerns did reflect the changes Treehouse is trying to make. “Merchandise sold by publishers is so often well designed but not always well executed, leaving the purchaser with a garment or product that erodes quickly or breaks easily,” said Yenzer. “If there was anything I could change, it would be merging the design ingenuity, product knowledge, and creativity of publishers with the efficient production and shipping methods that larger retailers can bring to the table.”

Yenzer has bought from online stores such as BioWare, Bungie, Jinx, and ThinkGeek, among others, but also likes to shop at brick-and-mortar retailers “if for only the ease of purchase that comes with finding products at a local store,” he said. “Trying clothes on before buying is always a plus, as well.” But the designs, he admits, do leave a lot to be desired. 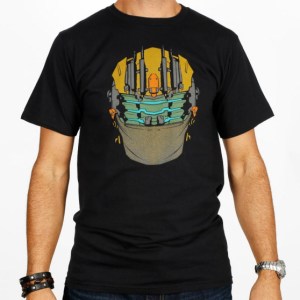 One thing you can’t always find in video game stores, though, is equality in male and female apparel. Riordan said it’s critical — especially around launch — for companies to overindex the male design because a female can still wear it. But a male won’t wear a female’s design because of the difference in body style. We asked a couple female gamers via Twitter for their opinions.

Laura Klotz, a 36-year-old who’s been gaming since she was young, told us, “In general, I don’t mind buying unisex sizes of clothing mostly because it enables me to share my T-shirt collection with my husband. However, it would be nice if a greater range of options were presented if only because it would mean that the industry was recognizing that they have more of a female fan base than they have previously tended to acknowledge. The way things are now, it seems like they still think the majority of players are guys or dress like guys.”

Wendy Vermeers, 33, chooses to buy her gaming apparel at online stores “because they make me feel more comfortable being a female gamer” whereas local stores are more male-targeted.

“I usually buy my gamer-related clothing from places like Threadless, Shirt.Woot, [and] ThinkGeek,” she said. “Or if I do find something out and about, I can occasionally find stuff at Hot Topic. These companies seem to be a little more all-inclusive, and I feel comfortable and wanted as a female gamer and customer.”

So it seems that in both e-commerce and retail, a little more attention to the female consumers who are playing these games is needed as well. The new EA Gear store currently features 12 items in its apparel section that are made to fit females, like this ladies’ FemShep illustrated tee. Comparatively, it sells 37 apparel items for men. The Halo Waypoint store contains 10 articles of clothing in men’s sizes and none for women though it does display a gender category. The Plants vs. Zombies store is much more balanced, with eight for women and 12 for men.