A year after his death, Steve Jobs’ superyacht Venus set sail from its harbor near Rotterdam, the Netherlands. Photographer Hans Esveldt spotted it and snapped a few pictures.

Venus is 80 meters long — over 250 feet — and has living quarters to accommodate 12 people. Its equipment and living space, according to SWNS.com, can be controlled from seven 27-inch iMacs. The ship has a very unusual design, with a very straight bow and gently sloping stern, and a profile dominated by the horizontal lines of its waterline, windows, deck, and cabin roof. 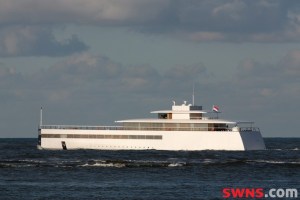 Above: Steve Jobs’ yacht at sea off Rotterdam, the Netherlands

Philippe Starck created the yacht with complete carte blanche from the founder and CEO of Apple, as he recently told Super Yacht Times. That was extremely unusual for Jobs, who was notoriously detail-oriented, but this demonstrates the respect he had for the legendary European designer.

Of course, that was simply for the major, exterior design. For the interior, Jobs had more to say. As SYT recounts, Starck and Jobs spent considerable time over those details:

“We spent just one day every six weeks, for five years, on refinements. Millimeter by millimeter. Detail by detail.”

As the photos show, the result of the collaboration between Starck and Jobs is extreme simplicity.

The sad reality, of course, is that Jobs never got to sail in the boat that he built.