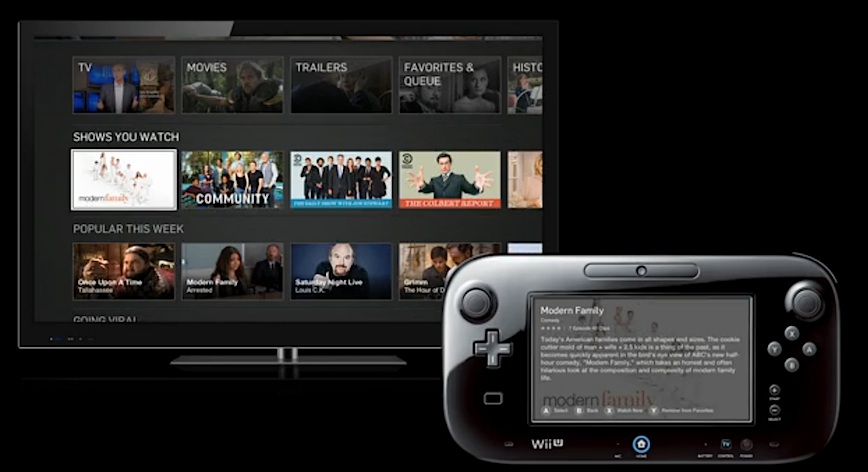 Hulu has released an app for the Wii U that ties the game console’s handheld screen to the big one on your TV in an interesting way.

With Hulu Plus for the Wii U, you can navigate through the video service’s many shows using a combination of information on the big screen and further details on the little one, aka the WiiPad. For instance, you can flip through thumbnails representing each show on the big-screen browser; as you select each one, further details on the show pop up on the screen on the handheld controller.

While you’re watching a show, the little screen shows playback controls, a menu of the video’s available chapters, and other options.

In what I’d like to call “bathroom mode,” you can switch video playback to the small screen. That’s handy if you’re, um, moving about the house. (Even more handy given the WiiPad controller’s surprisingly long wireless range.)

Hulu Plus joins Netflix, which has been available since the game console’s launch two days ago, as one of the Wii U’s entertainment options. (It also has a host of Nintendo-provided online forums and other amusements.) Nintendo is clearly trying to make the Wii U into a hub for all your media and entertainment needs, not just video games, so this is a step in the right direction. Read our review of the Wii U for more.

Hulu’s service for the Wii U free, but — just like Hulu’s other device-specific apps, such as Hulu for the regular Wii, PlayStation 3, Xbox, iPhone, iPad, Android phones, Nintendo DS, and Roku — you will need to be a Hulu Plus subscriber. That costs $8 per month.