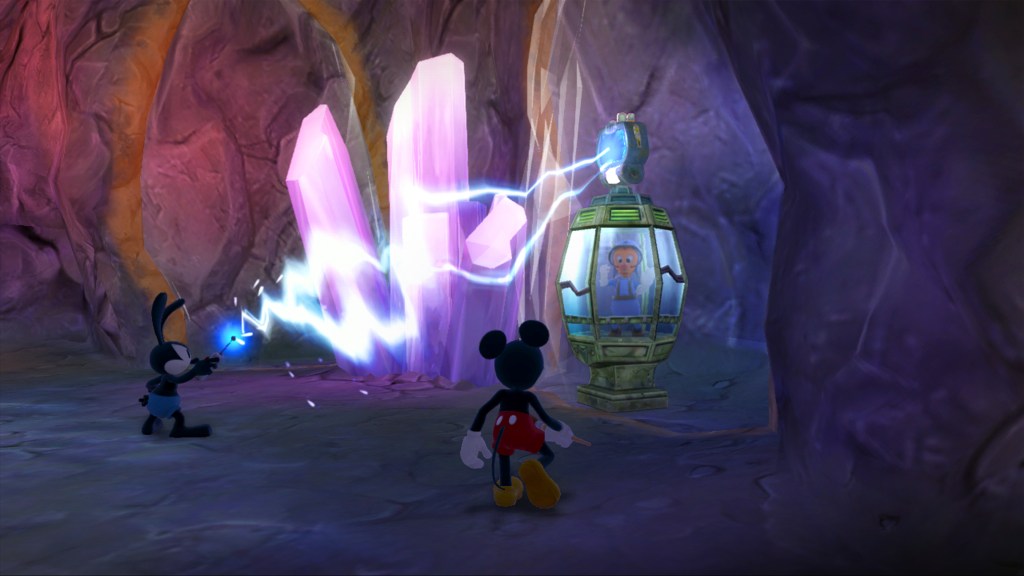 The power of two isn’t enough
Whether playing with one of my kids in split screen co-op mode or as a single player on my own, Mickey is definitely the main character while Oswald is support. You cannot play as Oswald except in multiplayer. Which is fine, of course, as it isn’t titled Epic Oswald. However, the support of a second character, whether AI controlled or second human directed, is never quite as powerful as I wanted it to be.

When the game controls Oswald, he continually gets in the way, which is especially annoying during platforming sections when precise control and vision is paramount. You can call him to your side, but he takes his sweet time, and more often than not needs several reminders to figure out what you want him to do. Oswald is much more helpful when moved around by a second controller, even if the directing child is hopeless at cooperating with what you want him to do. Ahem. 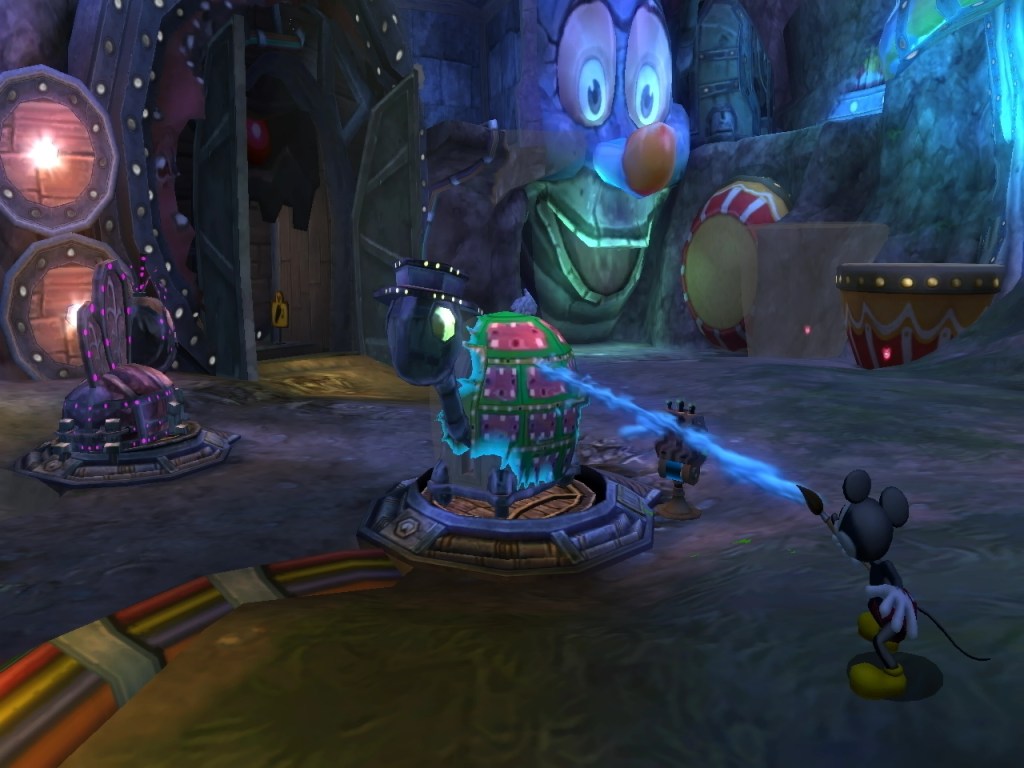 The camera and split screen are frustrating
While the camera control seems a bit more useful in Epic Mickey 2 than it ever was in the original title, it still feels like old technology, especially when battling aggressive enemies or trying to jump to a really tough spot high up in some trees. Foliage and walls keep cutting off any sort of predictable viewpoint and make these sections really tough, which is surprising for such a child-friendly game.

My kids and I finally gave up on split-screen gaming about three-quarters of the way through, deciding that being able to see more of each environment was more important than having constant control of Oswald. When we needed to get his attention, we added in a controller, had someone in the room put him through his paces, and then quickly returned to full-screen mode. It’s a shame that a game that’s so focused on cooperative play is lost in poor implementation of split-screen mode. 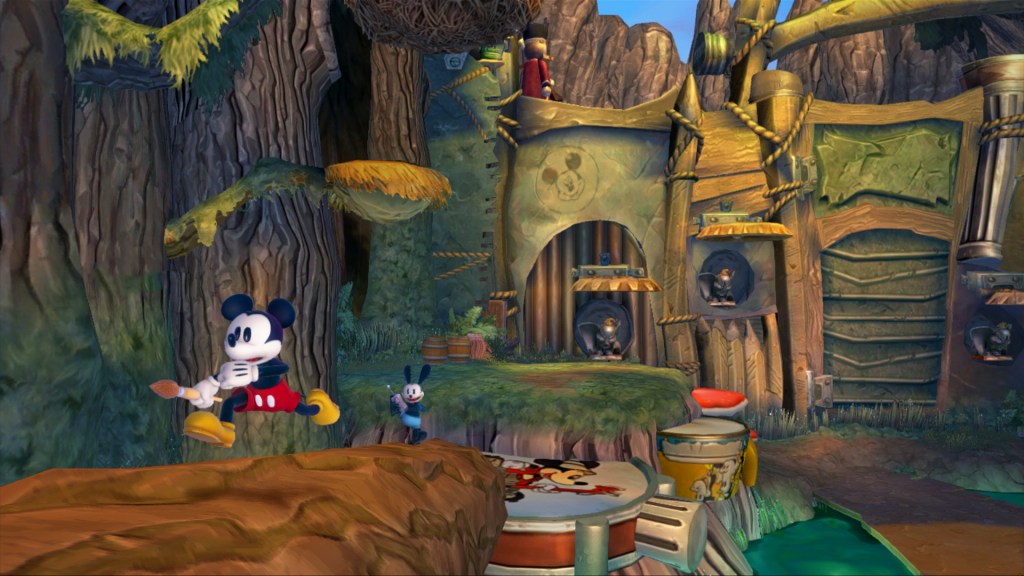 There’s no joy in repetition
Honestly, the story failed to compel even my kids to want to keep playing through the several hours of repetitive tasks. We took turns yelling at Gus the gremlin to shut up as he shouted out his scenery-chewing dialogue for a third, fourth, or tenth time. Several checkpoints force you to sit through dialogue or watch as the camera pans across the field of enemies in particularly tough environments. When Mickey dies again and again, it becomes tedious fairly quickly.

What happened to the musical?
Epic Mickey 2 has a couple of fun show tunes in the first act that mostly disappear soon after. I had high hopes for the musical interludes that the first scenes all but promised, with the Mad Doctor singing his little animatronic heart out, but they never really pan out. It’s like the developers forgot about the singing. And that’s just sad. If Disney can’t make a decent musical video game with the amount of talent at its disposal, who can? 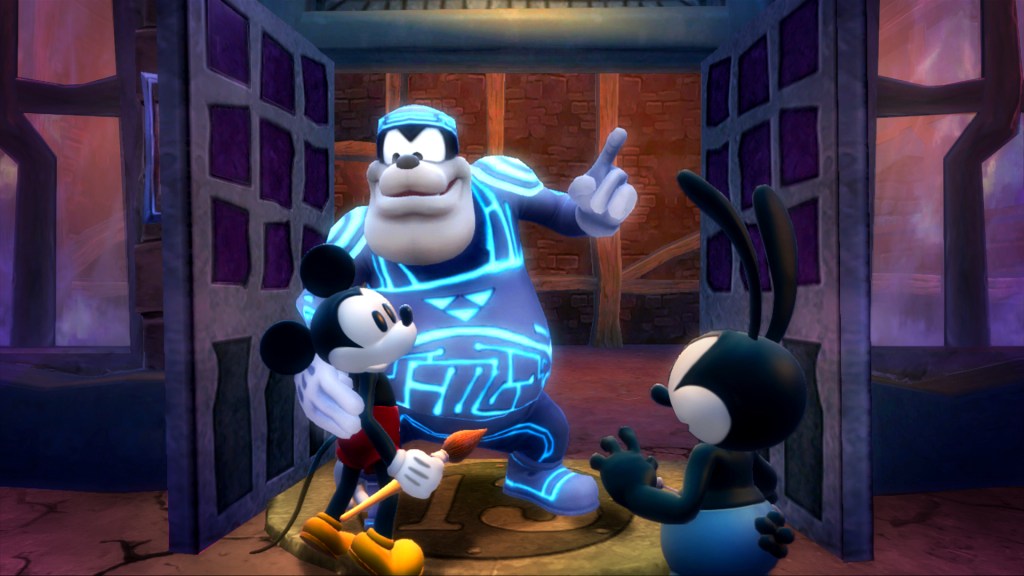 Disney Epic Mickey 2: The Power Of Two is doubly disappointing since it promises so much. I went in expecting a rousing, emotionally resonant story for kids and the young at heart that was full of Disney magic, and I came out with an empty feeling. The warm visual design and familiar characters of Mickey, Oswald, Goofy, and Donald are ultimately underserved by a disjointed story line and poor implementations of technology like cameras and cooperative split screen.

While Epic Mickey is a treat to look at and provides some delight — mostly in the visual nods to older, more forgotten Disney character and environmental design — it finally falls far short of the wondrous, creative, simply magical experience it promises.

Disney Epic Mickey 2: The Power Of Two released for the Xbox 360, PlayStation 3, PC, and Nintendo Wii on Nov. 18. The publisher provided GamesBeat with an Xbox 360 copy for the purpose of this review.