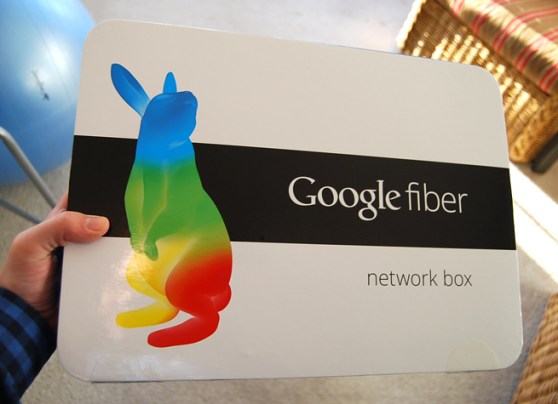 KANSAS CITY — While Google Fiber has attracted a lot of hype for bringing insanely fast Internet to Kansas City, most startups and small businesses here won’t benefit from it in the near future.

It’s easy to get a little caught up in excitement about Google Fiber — even I did. Having one of the biggest web service providers in the world building its own fiber-optic network with web connection speeds that are 100 times faster than average blows the mind a little, even if it is limited to this one city in the Midwest for now. Check out these crazy speeds I saw first-hand on Monday and try to not get pumped about using Fiber for your home or business: 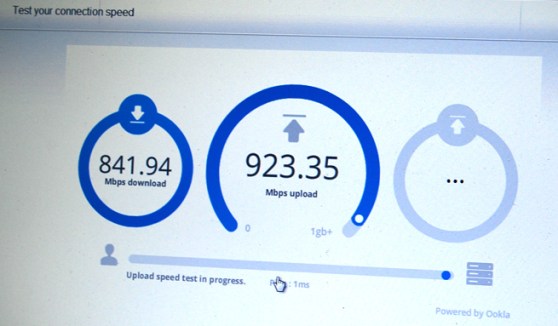 That’s nearly a gigabit of upload and download capacity. Amazing.

But even though it’s “cool,” it’s important step back a bit and realize this is just the beginning of a long process. There’s many miles of fiber to lay down and lots of eager residents to serve before businesses get in on the action.

No small-business support yet

The foremost reason most startups will not benefit from Google Fiber immediately is that it does not officially offer service for businesses. Google originally intended Fiber as a solution for residential use, so it is using that vision to build the network right now. The company originally said it was driven by U.S. companies not offering enough broadband options to consumers.

“From the beginning, this was all focused on residential,” said Jenna Wandres, the senior communications associate for Google Fiber. “But it quickly became evident a lot of businesses were interested. … We have no doubt that entrepreneurs will eventually take advantage of this.”

Of course, you could just run your startup out of your bedroom or your garage. But a key restriction for Google Fiber will hold businesses based in homes back a bit: No servers are allowed on Google Fiber. Part of the contract states that you won’t run a server, even though that could be an invaluable resource to getting a web-based business rolling.

EyeVerify, a startup located in a commercial space down the street from the first homes getting Google Fiber, is an example of a young company that desperately wants access to the project’s superfast speeds.

“We’d love to have it, so yes, we’re disappointed,” EyeVerify chief executive Toby Rush said. “But we’re hoping it will come sooner rather than later. It could help startups in a lot of ways, especially those who do real-time virtualization and web apps. Google Fiber could also help startups by giving them easy access to high-bandwidth households.” 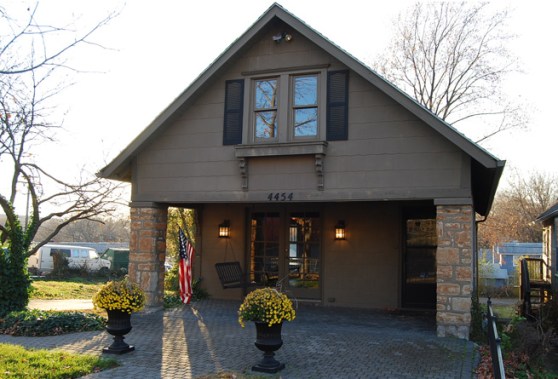 While most businesses don’t have access, a few lucky startups will get to use the service. As long as your small company works out of a house, you might be able to use Fiber. For example LocalRuckus CTO Matthew Marcus owns a house (pictured above) in the Hanover Heights “fiberhood” where several startups are located. The house includes several startups: LocalRuckus and FormZapper are located in the basement, and Leap2 is currently taking over the main floor and upstairs. (There’s even a conference room in the attic.) Marcus preregistered his house for Google Fiber several months back, and Google installed it last week.

Marcus has used Google Fiber for one week, and in that time, he hasn’t seen many practical uses yet outside of helping his company’s lead developer with a few programs. He said he plans to brainstorm with other startup founders soon to come up with new ideas on how to take advantage of Fiber, since his company is one of the first to use it.

A few doors down from Marcus’ place is a house allocated for the still-new Homes for Hackers program. Created by the exceptionally generous developer Ben Barreth, who bought a house just so entrepreneurs could stay there, the program aims to give startups three months of free rent plus access to Google Fiber.

“A small number of businesses were able to register for Google Fiber and will be able to use it in the same way a residential customer would,” Wandres said.

Google has promised that an official “Fiber service for small businesses” will come down the line, but it will not publicly commit to a timeline.

A source at a well-connected Kansas City startup told me he has heard “six months to a year” is the timeline to start signing up small businesses. We’ll see if that pans out.

Building out KC’s fiberhoods through fall 2013 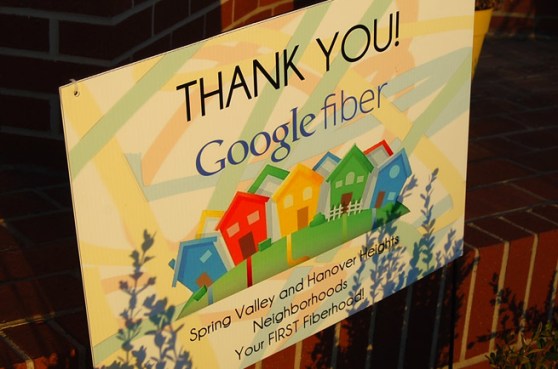 Google’s clear priority now is building out residential “fiberhoods.” The company was able to meet preregistration goals for 180 out of 202 fiberhoods in both Kansas and Missouri. It plans to finish constructing these fiberhoods by “fall 2013,” but Wandres said that could change if unforeseen events like bad weather set back construction. Google will keep the timelines updated with projections for every fiberhood on the main Fiber site.

Despite misconceptions (some startups we spoke with thought only households who preregistered before Sept. 9 could get Google Fiber), anyone who lives in a fiberhood that has not started construction can still sign up. Simply go the main Google Fiber site and register your info with Google before construction begins in your ‘hood.

And although people around the United States (and the world) are clamoring to try Fiber, Google has not committed to bring it to any other cities.

Promise for the future

While Google Fiber isn’t quite ready to make a huge impact on startups, some argue that the idea of Google Fiber itself is getting people interested in the city’s businesses.

“It shines a light on our information-intensive businesses and ideas,” Pete Fullerton, the CEO of the Economic Development Corporation of Kansas City, told me. “There’s a lot happening here that’s not tied directly to Google, but KC will have some real competitive advantages because of [Google Fiber].”

Stackify CEO Matt Watson, also an angel investor in KC startups, thinks most homes that get Google Fiber won’t be able to take advantage of all it has to offer. “I have 25 Mbps speeds in my home with AT&T, and I don’t fully tap the potential of that,” Watson said. “In the future, there will be a killer feature for it, but it’s not here yet.”

However, Watson does think businesses will have better uses than those at home, especially when more software and services are out that take advantage of superhigh-bandwidth speeds. Watson said he would sign up for Google Fiber for his business “in a heartbeat.”

Naithan Jones, the CEO and cofounder of Andreessen-Horowitz-backed AgLocal, also said his company would sign up for Google Fiber if it was offered, mostly because it would help with teleconferencing to his teammates in New York and San Francisco.

But Jones’ strongest notion of Google Fiber is that no one — not Google, not startups, not the media — truly knows the impact it will have on Kansas City and what applications might come of the service in the future.

“The possibilities are exciting, but no one really knows where this is going,” Jones said. “It’s great for Kansas City from a marketing perspective, but there’s still a lot we don’t know.”