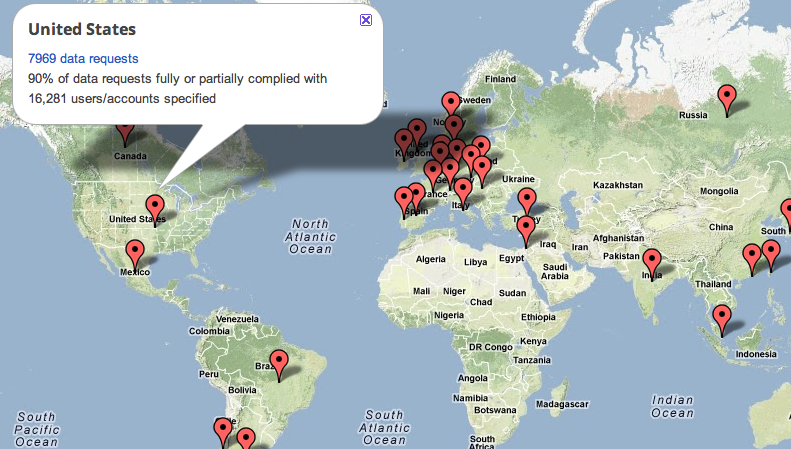 Last month Google updated its Transparency Report, which provides information to the public on government requests for Google users’ data.

Perusing the data on a slow Thanksgiving morning, I noticed that the leading country is not Brazil, which has been in an ongoing fight with Google over content relating to political campaigns. Nor is it one of the more repressive countries like Bahrain, which imprisons bloggers, or Iran, which filters the internet and wants to take its ball and go home, creating its own private internet.

Rather, it’s the modern, free speech, Western democracies that mostly lead the charge. And the United States is first in line, accompanied by France, Germany, the UK, Italy, Spain, and Australia in the top ten: 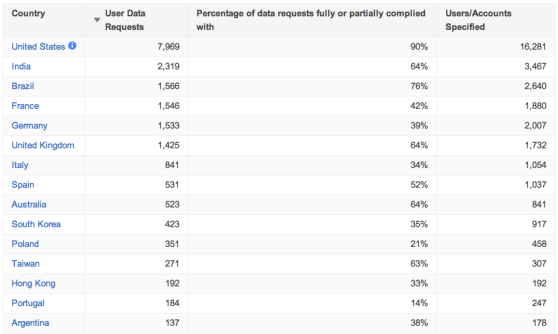 One caveat about the U.S. numbers: they do include requests for information from foreign governments routed through the U.S. government. But Google does not break out the numbers for those requests, so it’s difficult to determine how much of the total they constitute.

As the numbers stand, the U.S. requests Google user data almost four times as much as the next country, India. And its requests are honored more than four times as often.

Google says it is very careful about how and when it complies with requests:

When we receive a request for user information, we review it carefully and only provide information within the scope and authority of the request. We may refuse to produce information or try to narrow the request in some cases … We take user privacy very seriously, and whenever we receive a request we make sure it meets both the letter and spirit of the law before complying. When possible and legal to do so, we notify affected users about requests for user data that may affect them.