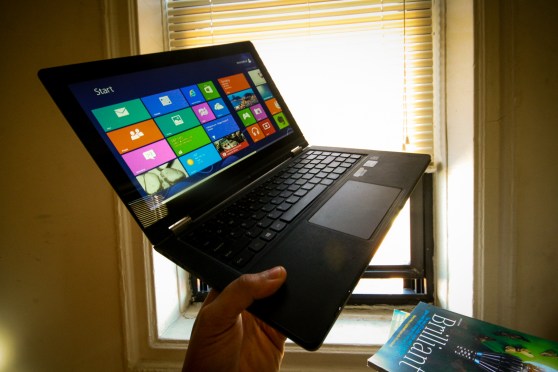 As one of the first devices running Windows 8, Lenovo’s IdeaPad Yoga has as much to prove about Microsoft’s new operating system as it has to prove about itself.

How well does Windows 8 work with touchscreens? How about on traditional laptops? Does Windows 8 even work at all?

But the biggest question is this: Can Lenovo (which is now the PC market leader) show all other PC makers how to make a decent Windows 8 computer?

So far, the answer seems to be yes.

As with many other early Windows 8 devices, the IdeaPad Yoga is built on flexibility: It’s central selling point is its “transforming” mechanic: It can flip and fold into four different shapes, depending on how users feel like interacting with it. “Tent mode” works well for things like cooking and watching videos, while “tablet” and “laptop” modes work exactly how you’d think they would, to varying degrees of effectiveness. (I never could find a legitimate use for “stand” mode”.)

That strategy meshes particularly well with Windows 8 itself, which Microsoft is pushing as the ideal interface for both desktops and tablets. The operating system and laptop are well suited for each other.

One of the most immediately striking things with the IdeaPad Yoga is its 13.3-inch touchscreen. Windows 8 is a visually stimulating interface, and the IdeaPad Yoga’s 1,600 x 900 resolution display shows it off particularly well. You can’t help but want to touch the screen — which is exactly what Microsoft wants you to do.

I’m also a big fan of the device’s rubber palm rests, which are a welcome change from the cold (and sometimes too hot) metal of my 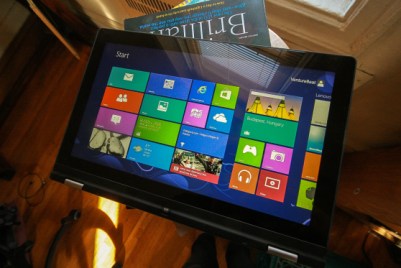 Macbook Air. As with the display, this feature makes using the IdeaPad Yoga not just satisfying but throughly enjoyable.

And then there’s the whole flexibility thing. As one the Yoga’s core selling points, the device’s flexibility is largely pretty good (with one exception that I’ll get to below). Putting the device in “tent mode” is a unique experience that works particularly well for watching a movie or flipping through photos. It was my favorite way to interact with the Yoga.

Another big thing that Yoga buyers may likely worry about is the durability of the device’s hinges. While it’s far too early to say how well they will hold up over time, they are very well constructed and are clearly very solid. Lenovo built the Yoga to last.

The Bad: Flexibility has some big fat drawbacks

But as nice as that flexibility is, the Yoga’s multiuse design creates many of its biggest problems.

The most jarring of these comes when the device is in tablet mode. Flipping the keyboard under the Yoga’s screen not only means that it’s exposed but also means that your fingers will constantly rub against the keys. It’s highly uncomfortable.

Another problem is the device’s fan system, which was running more often than not. The YogaPad gets too hot too frequently, even when under a minimal application load. This often makes it a pain to hold, especially when hot air is blowing out of its vents.

And then we’ve got the device’s weight. At 3.4 pounds, the IdeaPad Yoga is more than twice as heavy as the iPad. That, coupled with the issues above, makes it impossible to recommend the IdeaPad Yoga as a tablet. It just doesn’t work. (I won’t even get into how odd the IdeaPad’s 13.3-inch screen and wide aspect ratio are for a tablet — though the latter is an issue we also saw with Microsoft’s Surface.)

The IdeaPad Yoga’s battery life is fairly average. In my very casual and decidedly unscientific testing, the battery lasted for approximately five hours with normal use, making it fairly comparable to devices like the Macbook Air I use every day. (Lenovo, for the record, claims the battery life is eight hours, though I’m really not sure from where it got this number.)

Last, and perhaps most significant, is Windows 8 itself.  As a part of the first batch of Windows 8 devices, the IdeaPad Yoga exposes too strongly the wide array of bizarre, confounding, and oftentimes irritating quirks that bog down the Windows 8 experience.

At the core of the problem is this: Windows 8 fails because it tries to do too much at once. Microsoft wants the interface to work as well on tablets as it does on fully functional computers — but it doesn’t, at least not yet. 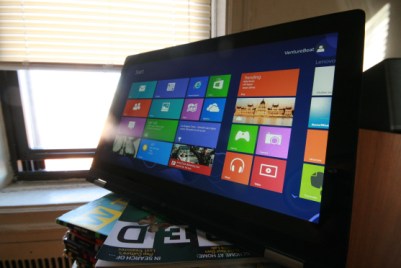 The IdeaPad Yoga, as a result, suffers from the same problem: It’s nice as a laptop but almost unusable as a tablet. This is the fundamental issue with flexibility: Bend too much and you’re liable to break in half. And that’s exactly what’s happening right with Windows 8 and many of the devices running it — just too much compromise.

Perhaps Microsoft will eventually figure out these issues. But for now, Windows 8 remains an enticing, promising, but ultimately exhausting experience.

The Bottom Line: A nice first try, but Lenovo (and Microsoft) can do better

All this said, I really, really like the Yoga 13 — just not as a tablet.

At $1,000, the device is a solid first effort from Lenovo, which clearly has at least the seeds to a winning formula here. All that it lacks an effective execution, which could come as soon as next month when Lenovo releases the Windows RT-equipped Yoga 11.

While that device likely won’t be able to avoid some of the larger Windows 8-borne issues that weigh down the Yoga 13, it’s smaller footprint and more extensive battery life may just make it what the Yoga 13 should have been.

Still, if you are looking for a pretty good Windows 8 laptop that will only get better with time, go for the Yoga 13. Otherwise, just wait for its successor, which is sure to fix some of the device’s more annoying problems. Or just wait until the next wave of Windows 8 machines: The Yoga’s unique flexible design is just the beginning of what PC manufacturers can do with Microsoft’s new OS. 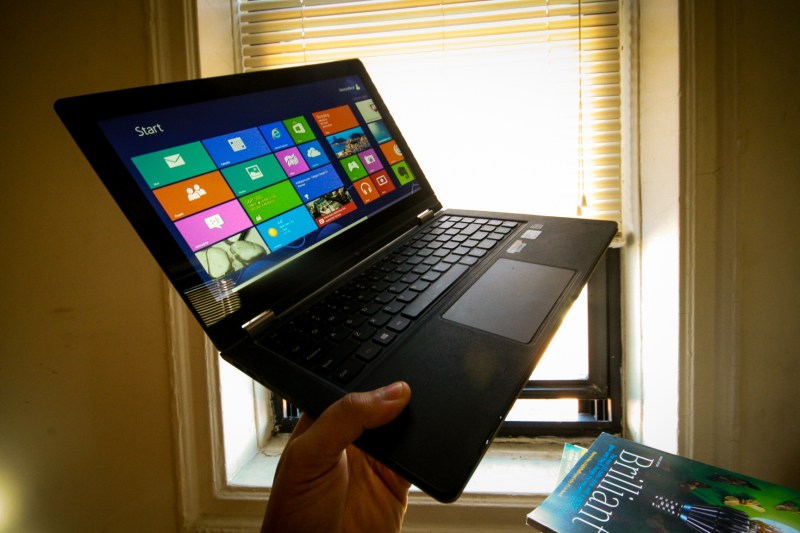