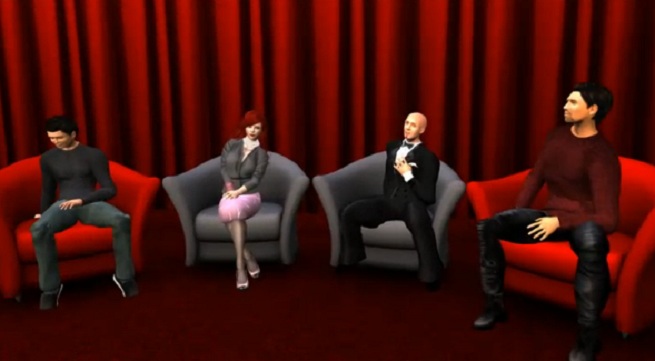 The future of machinima, or making films using video game graphics engines, looks promising. That was the conclusion of a panel on the machinima film market moderated by Internet media specialist and filmmaker Pooky Amsterdam (pictured virtually above, second from left).

I participated in the panel (my avatar is on the far left) on the Realistic Market for Machinima inside the virtual world of Second Life, which was the host to the fifth annual Machinima Expo 2012 conference. We explored whether machinima films have a future as commercial mainstream media.

I had first heard about machinima as a film medium back in the 1990s, after id Software launched its Quake and Doom games. The first-person shooter gave players the tools to make their own animated sequences with game characters. And it allowed them to make recordings of the animations, which could be played back as films and shared on the Internet. Game engines became viable tools to make animated shorts. Some of the big hits of machinima over the years include Red vs. Blue, the comedy series based on Spartan characters from the Halo series.

Schultz believes that we’ll see more such videos from fans blur the lines between amateur and professional filmmakers. With new game engines such as Unreal Engine 4 from Epic Games and tools for making films from Valve, machinima filmmakers are getting a lot closer to being able to depict realistic human imagery and beautiful scenery they couldn’t produce otherwise.

“There’s a thin line between $1,000 [film-editing] packages and what you can download for free on the Internet,” Schultz said.

“As a tool for advertising,” said McCloud, “[machinima] is fantastic. Feature films are becoming games, and games are becoming films. You can see the crossover in your theater every week. They really blend well.”

“It is not only mirroring animation technology,” added Marino, “but it’s also mirroring live-action films.”

Amsterdam asked us what we thought about machinima as a medium. I was impressed with this year’s Machinima Expo contest entries, which have distinct “indie” flavor and explore themes outside of the norm for most mainstream films. But I don’t see much evidence yet that the machinima filmmakers are raising big budgets to produce highest-quality commercial projects yet. Maybe it’s going to come from crowdfunding, but I haven’t seen that yet.

Check out the video below. And here’s a link to the Machinima Expo video contest winners and related links.