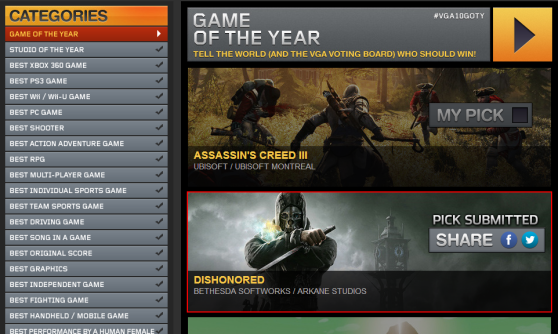 After perusing this year’s list of nominations for Spike’s annual Video Game Awards (a.k.a., the VGAs), I felt a bit disappointed. Hardly the first time, mind you — as an opinionated gamer I often feel my tastes are at odds with the mainstream, and that mainstream is well represented by the VGAs. But usually I just say “c’est la vie” and move on with my life. I’m not shallow enough to need my opinions validated by an awards show, be it about video games, movies, or music.

But this time I felt like there was a major injustice, one that has been building for years now and has reached and probably surpassed the tipping point, and that’s the blatant dismissal of mobile gaming. Yes, there is a “mobile” category, but it shares its slot with “handheld” games (PlayStation Vita and Nintendo 3DS). Worst of all, not a single iOS or Android game was nominated.

OK, one was: Draw Something, in the Best Social Game category. It was available on mobile, but I assume its inclusion in this category had more to do with its presence on Facebook. Also, didn’t we all stop playing it back in June or so?

Full disclosure here: Though I used to write about video games from a journalistic perspective (GamePro, X-Play, and Computer Gaming World are just a few names I used to find on my paychecks), I now make my daily bread as a PR guy for Gameloft, who develops and publishes games almost exclusively for smartphones and tablets. So I do have a vested interest in this.

But this isn’t sour grapes about none of my company’s games getting nominated. This is about the shock that I felt to see that none of the hundreds (thousands?) of games released for the iOS or Android platforms by anyone were deemed worthy of nomination.

I could go into a long rant about how the number of people playing games on smartphones and tablets is surpassing PCs and consoles at an unheard-of clip. Or you can just read all about that here: https://venturebeat.com/2012/06/14/2012-mobile-game-study/. The short of it is, the mobile age is upon us, and there’s no looking back.

I don’t want to use success metrics as my justification. Rather, my concern has to do with the lingering perception that mobile games are somehow lesser or that they’re nothing more than casual time-wasters that people play on the bus or waiting in line at the DMV. This perception, obviously still held by a large number of the traditional video game media, is not just short-sighted and incorrect, it is damaging to our industry as a whole.

Amazing games with high production values, engaging narratives, and complex gameplay are being released on mobile devices every week. And even some of those with stripped-down productions and simplified yet captivating gameplay are, too, and they are being played by larger numbers of people — in part because you don’t have to go to a brick and mortar store and shell out $60 to enjoy them. I’m not trying to slag off console games, but we are at one of those moments in our gamer history when an outmoded way of thinking is having a hard time accepting what is coming in the very near future. I know, because I was there for the last one.

When I started writing about games back in the late 1990s for Computer Gaming World, we were in a very similar situation in terms of prevailing attitudes: “Real” gamers played PC games, and console games were just dumb diversions, for kids and people who liked to just click on buttons really fast. At least, that was the expressed opinion of some of my more antiquated colleagues. They also thought these websites would never supplant traditional print media, but that’s a story to laugh about another day.

The point is, attitudes are already changing around the industry — just read the twitter feeds of game journalists, especially those on the VGA advisory board, and see how often they talk about what mobile game they’re obsessed with at the moment — but the VGAs seem stuck in an era that is quickly evaporating. That really needs to change. There’s no good reason to not consider the best games on iOS and Android (and now Windows Phone 8, too) along with their console and PC cousins.

I like the VGAs and think they provide a great service. We should be championing the best creative output our industry has to offer in big, showy, televised ways. Games, as a source of entertainment and as an art form, deserve that. But let’s be true to our industry and stop ignoring such a huge swath of it. Otherwise the VGAs will soon become as meaningless as so many of the other major awards show out there. I’m looking at you Oscars and Grammys — but not you Golden Globes. We still cool.