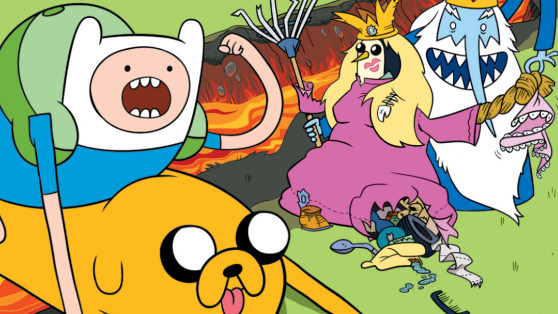 Adventure Time is a love letter to video games, so it’s no surprise that it’s become one of them. The hit Cartoon Network show follows a boy hero named Finn and his canine best friend Jake, who fight ice wizards and pal around with candy people in a vast land. It’s a fantasy world every gamer would love to explore. What is unexpected, though, is the classic title it uses as inspiration.

Zelda II: The Adventure of Link is a strange game, loved by few. Loyal fans who appreciate its side-scrolling action, atypical to the role-playing series’ later installments, have re-created the 8-bit release in Minecraft and as a first-person shooter. But developer WayForward Technologies’ new effort, Adventure Time: Hey Ice King! Why’d You Steal Our Garbage?!! (available on Nintendo 3DS, the version pertaining to this review, and DS), refines the action-role-playing game for new audiences. It shows a little love for an old favorite without neglecting the fans playing for Finn and Jake.

Faithful to the show
Adventure Time: Hey Ice King! is mathematical, as the characters like to say — in other words, it’s awesome and true to the weirdness of the show. Meeting familiar characters means you hope for your favorites to appear, and many of them do, such as Marceline, Peppermint Butler, and Lumpy Space Princess. Like they behave on television in the Candy Kingdom, they’re mostly hanging around, causing mischief, or partying. But your interactions with them are just as ridiculous and funny as you would expect — like when someone steals Princess Bubblegum’s pantyhose, and the high-strung Earl of Lemongrab arrests a princess, a candy person, and innocent baby for the crime.

The start screen greets you with a vocal remix of the TV show’s main theme, and the opening scene features Jake the Dog talking about how stinky Cosmic Owl’s butt is. From those moments on, you know the game is going to stay true to the cartoon’s comedy and appreciation of lighthearted, made-up songs. But the soundtrack isn’t a forced reference. The music is moody in dungeons and lively in the field, and any notes taken from the show are subtle in the game. You’ll hear some original songs, too, which serve as a fun homage. In the battle with the vampire Marceline, she rocks out with her guitar and sings just like she does in the show. 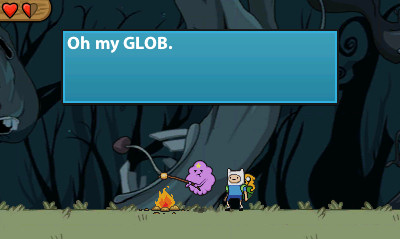 Zelda II who?
Make no mistake: Hey Ice King! is a throwback to Zelda II. But the similarities aren’t excessive to the point that it becomes a mere clone. You’ll probably be glad to know that WayForward’s game isn’t nearly as challenging; in fact, it’s set at a casual and enjoyable difficulty level. It’s not so easy that you won’t die, but you also get health items frequently and can record your progress virtually every five minutes.

The water nymphs’ fountains act as save points, and you will find these all throughout the Land of Ooo. They even recover your health. You could hypothetically choose to ignore them and heighten the difficulty for yourself, but they’re awfully convenient compared to Zelda II’s approach. In that game, you only saved when you died, and you respawned at the central palace — way at the beginning.

Hey Ice King! resembles Zelda II most in how it’s presented: with a top-down overworld map, where the sprites of monsters materialize and lure you into random encounters, which take place as a side-scroller. But the ones here are slower moving and not as overwhelming. Hey Ice King! also adds more platforming elements than its spiritual predecessor did. You’ll time jumps onto moving platforms and hop across tiny clouds in the sky. Abilities like Finn’s Down Thrust and Jake’s Fist Smash are also reminiscent of Zelda II, where the hero Link leaps onto enemies with his sword and breaks rocks with the Hammer, comparatively — only here, it’s with Finn’s sword and Jake’s giant fist. Other techniques, such as the Jake Roll (where Finn and Jake flatten enemies as a wheel) and Umbrella (which allows you to glide across gaps), are new — and tons of fun. 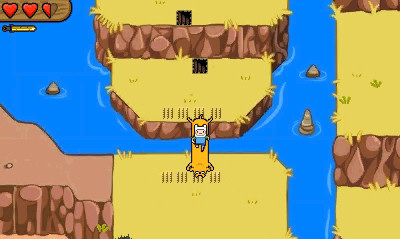 Versatile controls and a smart menu
Finn is a flexible boy. He can uppercut, butt stomp/bounce, punch high, and kick low. Even lazy Jake helps out as he rides in your backpack. The attack where he stretches out his gummy arms is key to defeating some of the trickier enemies unscathed, like the jumping rocks. (The enemies are pretty weird.)

These controls make the side-scrolling and platforming parts easier, too. Many frustrating retro games force the player to jump onto a platform where an enemy stands waiting and refusing to budge, guaranteeing that you’ll take a hit. In Hey Ice King!, you can easily combat this problem with one of your many moves, which aim in almost any direction. While the game doesn’t document every attack you have in the controls list, it makes note of the major ones for you, in case you forget.

The menu is easy to navigate, and you can either use the stylus or hold the left shoulder button to rummage through your inventory with the directional pad. As you travel through Ooo, you collect food items and condiments, like hamburgers and ketchup. Combining these successfully boosts the health reward you get from ingesting them, which can be a lifesaver when enemies are getting the best of you.

Other helpful features are the world map, with colored dots to represent locations (like save fountains and towns), and in-menu descriptions of each item. You can find offensive and defensive power-ups (like ninja stars or shoes that make you run faster) in addition to food, and reading what they do is a good way to predict the best times to use them. The descriptions that accompany story items can remind you of your next objective — where you need to go or who you need to see — which cuts down on all the wandering you’ll do. 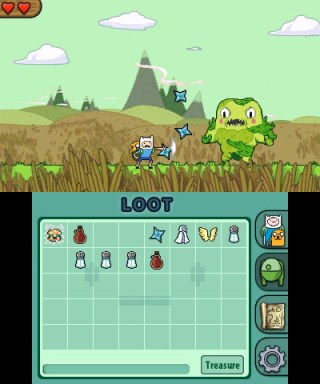