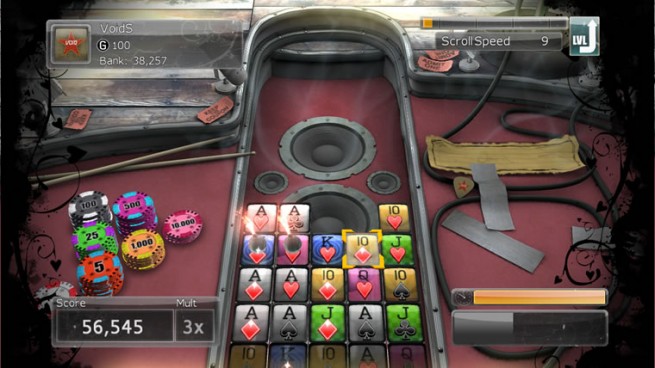 Match-three puzzle games like Bejeweled and its many clones are so 2000-and-late. All the cool kids moved on to puzzles based on classic card games like poker.

That’s how the amazing 2008 release of Poker Smash for Xbox Live Arcade worked, and now it is on iPhone, iPad, and iPod Touch. The developer announced the puzzler is available from the iTunes App Store now for $1.99.

Poker Smash operates on a familiar Tetris-like playing field except that the blocks are playing cards that push in from the bottom. Players can remove cards by creating proper poker hands. A two-pair will remove the four cards, but a full-house will remove five and net you significantly more points. It worked well with a controller on the Xbox 360 and will only benefit from touch controls.

Developer Void Star Creations plans to release updates and add features if the game finds a following on iOS devices. No word from the studio has surfaced about the potential for an Android port.