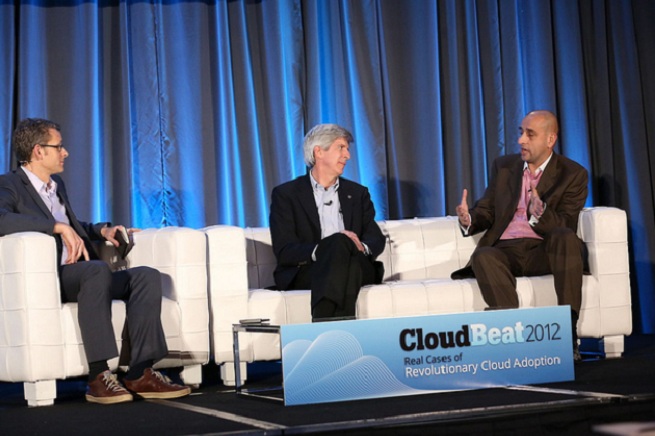 How do you do the cloud right? Salesforce showed off a case study of enterprise integration today at VentureBeat’s CloudBeat 2012 conference in Redwood City, Calif.

Elias Dayeh (pictured right), director of business operation at Axcient,  a hybrid-cloud-based data protection service, said that one of the myths is that a company can bring in Salesforce and implement its cloud-based sales solution in a “magical way.””

“The myth is it will magically fix everything,” he said in a talk at CloudBeat with Matt Marshall (pictured left), founder and editor in chief of VentureBeat. “Orders will start rolling in.”

But the first Salesforce integration wasn’t done right, starting in 2008. Dayeh came in during 2011 to help redo the integration. The cloud-based app wasn’t talking with the core systems. Integration had to happen, and Dayeh learned that “you still have to create a process” to do the integration right.

In this system, if one party upgraded its system, that could break the smooth flow of information from one place to another.

That’s not the way the revamped system works. Now, Axcient has automatically integrated Marketo with Salesforce. That was easy because apps on Salesforce’s AppExchange platform are designed to work together. They may look like web apps, but the data systems have been integrated. The apps talk to each other, said Peter Coffee (pictured center), vice president and head of platform research at Salesforce. That’s important because Axcient is adding customers who want storage at a rate of a petabyte a quarter.

Coffee said that Salesforce has architected its software so that such problems don’t occur. The behind-the-scenes software keeps the communication flow in spite of such differences. Salesforce has learned, he said, that it can’t require its customers to engage in months-long testing processes related to upgrades. Axcient is now using just about every feature that Salesforce offers.

Customers would not regard that as value if we imposed that testing on them,” Coffee said. “You are abstracted from what happens behind the scenes.” Salesforce has kept working on easy integration, so that its service can be implemented in a safe way. That way, a full installation can happen as easily as a prototype test can be done.

The mix of data across platforms doesn’t have to be scary for customers.

“The public cloud is not like a public toilet,” he said. “You put your money in a public bank, but your account is your own.”

Here’s a video of the discussion: