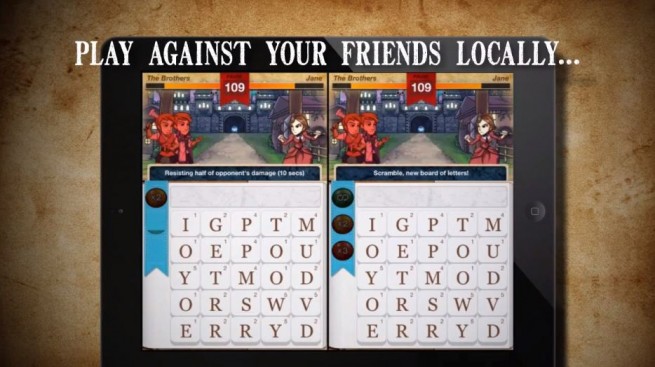 Rent-by-mail company GameFly is spreading its wings and learning how to diversify by offering up its first game under the GameFly Publishing label.

GameFly’s first release is an iOS (and eventually Android) competitive word puzzler from developer Feel Every Yummy titled Writer Rumble. Writer Rumble takes the concept of finding words in a grid and makes it a head-to-head battle. Players take control of characters based on classic literary figures like Edgar Allen Poe and Agatha Christie. Each writer is imbued with their own unique powers that makes it easier for the player to score points or harder for the opponent to do so.

The game features a single-player campaign where players must speed spell against creatures and enemies ripped from the pages of classic novels. It also has an impressive local competitive mode where two players can play on one iPad. This mode plays a lot like an arcade fighting game where the two players are elbow-to-elbow. The game also features an online head-to-head mode.