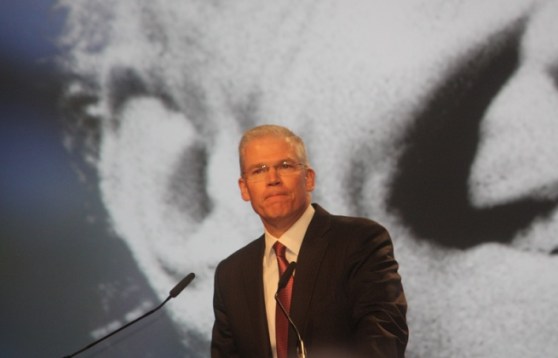 Rich Templeton (pictured), chairman and chief executive of Texas Instruments, won the chip industry’s highest award tonight for his career in business and his advocacy for improving education. And his advice to the rest of us was to take the time to boil frogs.

OK, he didn’t mean that literally, but we’ll get to that. Templeton was honored at the 35th annual Semiconductor Industry Association  dinner in San Jose, Calif., where he received the Robert N. Noyce award, named after the co-founder of Intel. He has been a tireless advocate for making the U.S. more competitive in technology and improving its education.

In his acceptance speech, Templeton thanked his father, who worked at IBM, for introducing him to technology.

“The technology, chemistry, and part numbers have changed, but the work it takes to do it hasn’t,” he said. “It takes great, skilled people to make these things” that are the foundation of the $150 billion semiconductor industry.

Templeton started working in the chip industry in 1980, when the Japanese came on the scene and threatened to take over the business, due in no small part to the anti-competitive practice of excluding U.S. companies from its own market and selling chips below cost to drive others out of business. Templeton watched as the U.S. industry’s founders gathered together and built the SIA as a lobbying group, putting pressure on Washington to make the Japanese play fair.

Templeton rose through the ranks and became a leader of Dallas-based chip maker TI, attending SIA meetings where Intel’s then-CEO Craig Barrett and arch rival Jerry Sanders, then-CEO of Advanced Micro Devices, would come together to deal with a common threat. 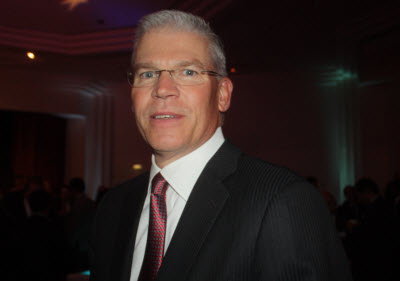 “These great characters would hang their guns at the door, but they brought their knives in,” Templeton said.

The U.S. instituted fair trade policies, dealt with the imminent Japanese threat, and, thanks to the rise of Intel in particular, U.S. chip companies still have more than 50 percent of the worldwide semiconductor market, which is the foundation for the $1 trillion chip industry.

“I don’t think the open trade battles are over,” Templeton said. “We have a few more of those, with the rise of China.”

The industry pulled together and dealt with the common threat in a state of crisis and saved technology in the U.S., Templeton said. But now it faces a similar crisis, self-imposed, with the decline of education. he noted that 40 percent of high schools in the U.S. don’t offer physics classes. That’s a formula for technological decline. Education is a long-term crisis, but a crisis nevertheless.

He didn’t quite finish that comparison. But it means that when you put a frog in boiling water, it will jump out. But if you put it in warm water and slowly turn up the heat, it won’t jump out. That’s what’s happening to us with the slow decline of education. If you’re trying to do something about education, he said to the people in the room, “thank you for what you are doing. Consider doing more.”

Templeton said he was reminded of the quote, “When your memories exceed your dreams, the end is near.” As he travels around the world, he is encouraged that the “dreams I see are far greater” than his memories. He is amazed there are 5 billion people using cellular phones.

“With nanotechnology materials, I see another 50 years of breakthroughs,” he said. “It is fun to look at the dreams that these young people still have.”

After the dinner, I asked Templeton if he really boiled frogs. “No,” he replied.