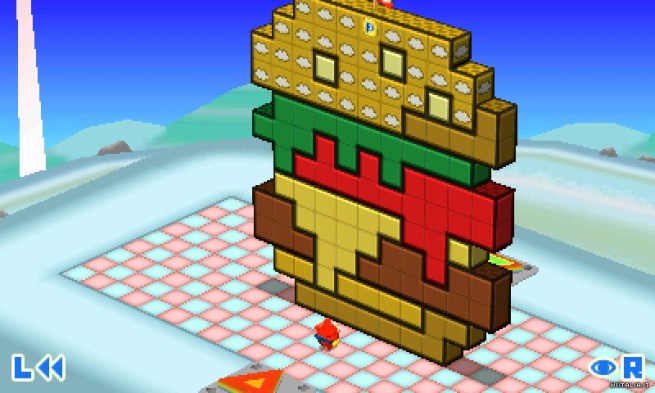 I enjoy Angry Birds, but it only takes a half hour with Nintendo’s latest 3DS puzzle game Crashmo (known as Fallblox in other territories) to realize how flawed Rovio’s feathered physics-based title is.

Both games have a three-star-based system that indicates difficulty. Only Angry Birds rewards players with stars for completing every level in the most difficult way. Where as Crashmo tells the player before the level starts whether it is a one-, two-, or three-star challenge.

This difference might as well be a chasm that separates the style of game you’ll find in the Apple iOS App Store versus something you’ll find in the Nintendo 3DS’s eShop — and Crashmo is the best example of why it’s wonderful that we have the eShop.

Crashmo is a 3D puzzle game where players push, pull, and move blocks in a thoughtful manner with the purpose of ascending said blocks to capture a bird that sits at the top of the level. Unlike this title’s predecessor, Pushmo, the blocks support each other in this installment and therefore come crashing down if nothing holds them up. Developer Intelligent Systems developed dozens of these levels, and players can create their own and share them using QR codes. 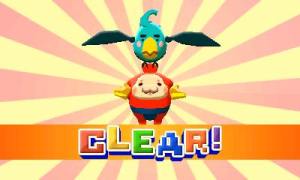 The challenge and the reward

Crashmo is a challenging experience. After a lengthy tutorial, the difficulty ramps up at a rocket’s pace. That, however, is where the delight lies. You can spend a minute or 20 in one of these stages depending on whether you can figure out the required trick to solve the obstacle that is stumping you.

As with any great puzzle game — or anything really — once I learned a trick, it remained learned. I quickly built up an arsenal of ideas and possible solutions that I could throw at just about any of the game’s many structures. Of course, nothing beats that moment when the game incepts your brain with a new helpful thought while making you feel like it was your idea all along.

You’ve made a mistake, but the title won’t punish you

Crashmo is essentially Pushmo, only more fully realized as a puzzle game. That means it brought along its best feature: the ability to rewind a mistake with the push of a button.

Holding down the L button will rewind the in-game action in a TV-DVR-like manner. It only works for a finite amount of time, but it’s usually long enough to fix the last few moves. Don’t worry about missed jumps or an accidental pull that makes your structure unscalable. Nothing is irreversible. Just punch that L button and put everything back as it was, and try your next best idea.

It’s an agreeable mechanic that allows the player to focus on solving puzzles. You’re never fighting the game beyond where it’s fun to fight it.

I’m hesitant to put this in the “what you won’t like” section, but I think it’s possible that the first round of obtuse challenges could scare off some players. Things get difficult fast. I found this enjoyable, but many people won’t.

If you prefer twitch-based puzzles like Tetris or something where you stumble upon the answer like Angry Birds, then perhaps you should hold on to your nine bucks.

Crashmo is a fine example of what a talented developer can do with a solid gameplay mechanic. It’s also a great argument for separating business from play.

The reason Angry Birds wants you playing the levels again and again — at least on Android — is because it is ad-supported. You struggle to get three-stars and every time you reload a level, they rack up another ad impression. For me, it sucks the fun out of the experience, and you can see the business model seeping through the mechanics in most smartphone games.

With Crashmo, the business is in the past. You’ve paid the price of admission, now Nintendo and Intelligent Systems want to make sure you have fun. They don’t have to obsess with squeezing that next dollar out of you and instead can feed you supremely designed puzzles.

Maybe others aren’t so sensitive to these issues — but I am. And for that, I’m ecstatic that a game as expertly crafted as Crashmo is available and that a market for more expensive downloadable games, like the 3DS eShop, exists for it to thrive in.

Crashmo is available now for the 3DS in the eShop for $8.99. The publisher provided GamesBeat with a 3DS eShop download code for the purpose of this review.