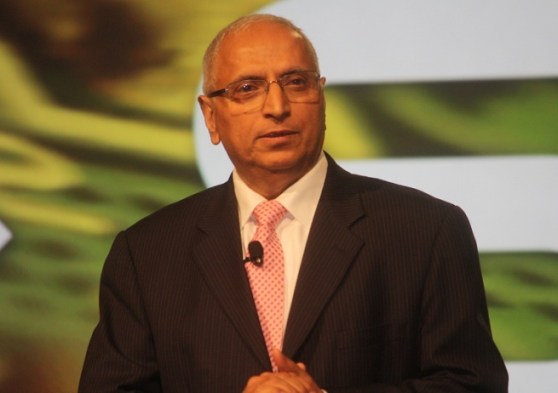 The U.S. chip industry is sitting pretty, with more than 50 percent of the worldwide semiconductor market, with $150 billion in annual revenues. But it has a long list of policy issues that it would like the newly re-elected President Barack Obama to address.

Ajit Manocha (pictured above), the chief executive of chip manufacturer Globalfoundries and the incoming chairman of the trade group Semiconductor Industry Association, said that the industry’s 35th annual dinner in San Jose, Calif., tonight that he hopes the president will get some work done. It would be good if somebody in Washington listens, since chips are the foundation of the $1 trillion electronics industry.

Manocha and his colleagues would like the governement to address: tax reform, fundamental research budgets, environmental issues, export controls, fair trade, education, cyber security, immigration reform, and overall U.S. competitiveness. He didn’t actually mention cutting the deficit, but throw that one in too. He also didn’t say which issue Obama should tackle first.

It’s no surprise these issues are on the industry’s agenda. They’ve been on the list of issues to address forever. Cyber security is relatively new, but stealing stuff that belongs to someone else has always been a big concern among chip makers, who have some of the most valuable technology in the world. Manocha began his career 35 years ago as a researcher at Bell Labs. Now he hopes that government will invest enough in the future to enable the kind of vision that the leaders of 35 years ago (such as Arno Penzias, the longtime head of Bell Labs) had.

Francis Kelly, a lobbyist and managing director for Deutsche Bank, was one of the guest speakers. A policy insider in Washington, D.C., Kelly thinks Bush tax cuts will be extended for a year — except for millionaires — in the next six months. He also thinks research and development tax credits will be extended. Kelly is also betting that a bipartisan deficit deal will be worked on in the next six months. He thinks it will be similar to the kind of deal that debt fighters Erskine Bowles and Alan Simpson are working to secure, a deal with both tax increases and spending cuts.