The Nintendo Wii U’s processor is slower than its counterparts in the years-old Xbox 360 and PlayStation 3, and the Wii U graphics chip either matches or is slightly faster than its rivals’ graphics chips. That’s another affirmation that Nintendo rarely cares about being on the bleeding edge of performance when it comes to loading up the features in its brand-new game consoles.

GamingBolt reported that a hacker Hector Martin, who goes by the name Marcan, discovered that the Wii U’s IBM PowerPC central processing unit runs at 1.24 gigahertz per core, with a total of three cores. By comparison, the PS3’s Cell processor and the Xbox 360’s Xenon run at 3 gigahertz per core.

Martin said that the Wii U is not so hard to hack. He says the security processor is dubbed Starbuck, versus the Starlet on the Wii, and it “seems to be about equally vulnerable, too.” He also said “clock for clock” comparisons with the older Xbox 360 chip aren’t strictly valid. 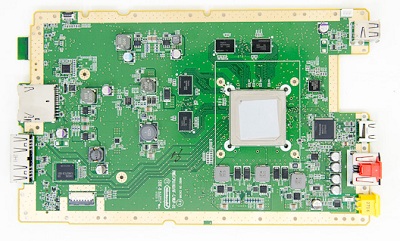 The Wii U’s graphics processing unit (GPU) is made by Advanced Micro Devices. Marcan says it runs at 549 megahertz. [Update: Rob Wyatt of Otoy points out that the PS3’s graphics chip runs at 550 megahertz (which is effectively the same clock) and the Xbox 360’s GPU runs at 500 megahertz.]

Of course, clock speeds are only one measure of performance. The number of cores is also relevant as is the processor’s architecture. But for the most part, this means that the Wii U is underpowered compared to the 7-year-old Xbox 360 and the 6-year-old PS3.

In a statement, Nintendo said, “We understand that people like to dissect graphics and processing power, but the experience of playing will always be more important than raw numbers.”

Expanding on that, I think Nintendo’s natural comeback is that the innovation lies in the Wii U’s tablet game controller and the new asynchronous gameplay it enables. The Wii U also has sufficient processing power to display games in high-definition.

But clearly Nintendo has made sacrifices. One of the big drawbacks is that the processor/GPU combination is too slow to power the displays for a TV and for two tablets at the same time when running high-speed games. Right now, Wii U games make use of only a single tablet controller played with a TV. To run a game with two tablets used at the same time, Nintendo will reportedly have to scale back the framerate of a game, running it at perhaps 30 frames per second instead of 60 frames per second.

That certainly means that the Wii U performance leaves something to be desired. But Nintendo has been able to keep the cost of the console relatively low. The Wii U debuted with a high-end model price of $349, compared to $399 for the Xbox 360 and $599 for the PS3.

When Microsoft and Sony launch their new consoles soon, it won’t be very hard for them to include hardware that runs circles around the performance of the Wii U.

[Wii U board image from AnandTech]