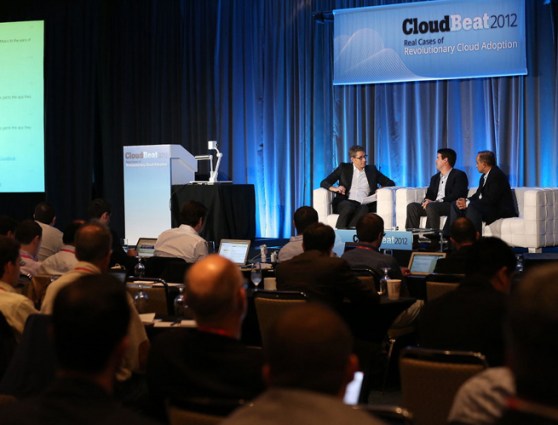 Big business is embracing the cloud more than ever. Cloud tech has reached a level of acceptance in the past year, with many companies moving out of pilot projects and into full-on deployments of critical parts of their business onto cloud-based systems.

This week, VentureBeat hosted CloudBeat 2012 in Redwood Shores, Calif., where executives from VMWare, Dropbox, Box, SAP, PepsiCo, Nebula, and more gave us tons of details on how they are using the cloud to disrupt business as usual.

Sure, we faced a challenge when Amazon decided to schedule its Re:Invent conference in Las Vegas at the exact same time. There’s no question Re:Invent, with its sold-out crowd, peeled some of our attendees away, but we had remarkable attendance (over 400 people) and content regardless.

And through the sessions, we saw several big themes emerge.

1. Security needs to step up in the cloud

One of the biggest concerns people had at CloudBeat was security. At a surprisingly lively panel with experts from HP, Qualys, and CloudPassage, these folks all agreed that cloud security was getting more scrutiny than ever.

Some of that scrutiny is unfair because security is problematic no matter if we rely on cloud services or not. Still, in the increasingly interconnected world of cloud services, a security weakness in one service can lead to breaches in many others, raising the stakes.

Thankfully, the speakers agreed on one easy step to move businesses and consumers in the right direction: Everyone needs to turn on multi-factor authentication if they can. Multi-factor authentication basically means you need to verify an account (part one) on a specific device (part two). Some of them even thought that every site and service on the web needs to turn it on too.

One reason so many people haven’t turned it on is because it’s sometimes a pain in the ass. During our Innovation Showdown, for example, the startup MuleSoft had trouble with its live demo because of multi-factor authentication on a Salesforce account.

2. PaaS is starting to catch on, but the enterprise will decide its fate

Platform-as-a-service (PaaS), once the ugly duckling of the cloud, is starting to get way more attention. In an exciting standing-room-only session, four PaaS CEOs discussed how their businesses were changing rapidly by offering more languages and options that even slow-moving enterprises could get behind.

PaaS providers offer tools that make application development easier and faster than ever, so there are lots of reasons for companies and devs to get on board. And PaaS is getting big enough that there’s even a new startup called Appsecute that offers a dashboard for managing multiple PaaS services. But the big question is, which PaaS companies will survive when major corporations start biting?

3. Healthcare in the cloud is gonna be huge

One thing we heard from several speakers at CloudBeat was about the intersection of health care and the cloud. With electronic medical records taking off and companies investing in numerous health-care solutions, things are changing quickly. It’s a bit of a “perfect storm.”

“There is market pressure, pressure from physicians and audience groups,” Scott Whyte, VP of IT Connectivity at Dignity Health, the fifth largest hospital provider in the nation, said on stage.

While there are many hurdles to electronic medical records — including security, breaches, compliance and regulatory issues, and legacy systems — the Affordable Care Act mandates the transition to them by 2014. This will mean a bit of forced innovation is coming and lots of players who will benefit.

Yet another topic we heard a lot about the conference was “big data.” Companies are looking for more ways to take advantage of vast amounts of unstructured data that they’re collecting from social networks and other sources and put it to better use.

Ken Stineman, the senior director of enterprise architecture and security at Genomic Health, told us on stage that companies can do better. “We are generating terabytes of data about the human genome,” he said. With that data in hand, Genomic Health hopes to do things like improve the effectiveness of chemotherapy on cancer patients.

A big data startup called AgilOne — which tries to foretell the future using the cloud — used CloudBeat to announce its $10 million funding round and the launch of its product. It provides cloud-based predictive marketing intelligence to help marketers figure out what their customers are going to do next.

5. Cloud compute is getting super cheap

Amazon lowered its S3 prices yet again during Re:Invent, prompting Google to lower its prices as well. We had Google exec Amit Singh tell us Google was “happy to compete.” Clearly cloud computing power is racing to the bottom when it comes to price. This is a great thing for startups and businesses that want to take advantage of the cloud. You could almost say it has a “Robin Hood” effect: It’s bridging the gap between rich and poor businesses.

Singh later told us he believes pricing for the public cloud, especially from major companies like Google should continue to go down. When asked whether it will eventually be free, Singh said he didn’t know if that would actually happen. He did say, however, that it was “possible.”