Why bother uploading photos when Facebook can do the work for you?

The social network today added a feature called “Photo Sync” to its iPhone and Android applications that automatically syncs your phone’s camera roll to a private album for bulk sharing whenever the mood strikes — no manual uploads required.

Facebook first started testing the automatic photo uploader in August on Android, and later on iOS. Today, people with the most current version of the Facebook for iOS or Android application can participate in the frictionless upload process.

The feature, which makes a seamless connection between your mobile camera and the social network, really shouldn’t be unsettling, unless you’re the type of person that doesn’t trust Facebook with your private moments. Facebook stores your synced shots in a private album until you manually go in and pick the shots that you want to share with friends. 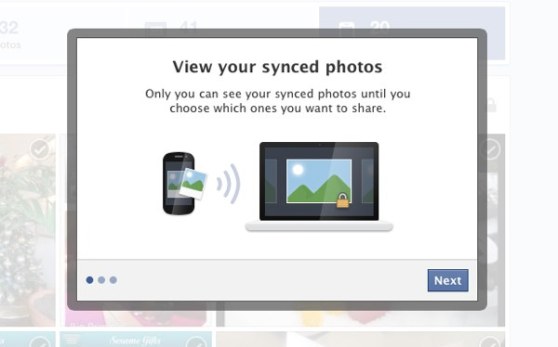 See. Totally not creepy. Well, save for the fact that whatever you shoot is stored on a Facebook server somewhere. I’d understand if that gave you pause. But then again if you have Photo Stream enabled on any of your iOS devices, you’re essentially trusting Apple with the same responsibility.

Skeptic that I am, I’ve chosen to enable Photo Sync for the simple reason that sometimes it would be nice to more easily share more of my photos on Facebook, especially the best ones that I forget to post while lost in a moment. I suspect that plenty of Facebook’s 1 billion users will feel the same, which means the social network will easily maintain its status as the most popular online destination for photo-sharing. Currently, Facebook members upload more than 300 million photos to the social newtork each day.

To enable Photo Sync, visit your Facebook Timeline from the Facebook for iPhone or Android app, click on photos, then select to enable Sync. The feature is gradually being rolled out to U.S. iOS app users and all Android app users who’ve previously uploaded at least one photo via web or mobile.