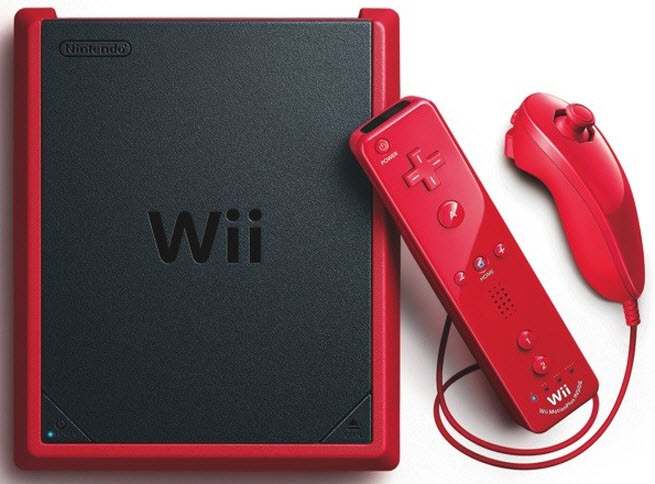 Nintendo surprised the industry this week as it confirmed a leaked story that it would launch a stripped-down Wii mini game console for $99 in the Canadian market. The red console pictured above has the same core functionality as the Wii introduced in 2006, but it will be available on Dec. 7 for $30 less. What’s missing? The machine has no Internet capability and does not play older Nintendo GameCube games. It also has a slightly smaller footprint than the Wii.

We asked if Nintendo would launch the new Wii mini in other markets. But the company said only, “No information is available about its potential availability in other territories in the future.” The Wii mini plays 1,300-plus Wii games, but it isn’t being sold with a bundle. By contrast, the $130 (or, counting recent discounts, as low as $119) Wii sells with Wii Sports and Wii Sports Resort bundled. The question before us: What is Nintendo’s strategy? I’ve got my own opinions on the subject, and I gathered some from throughout the industry as well.

In the past, game industry wags have talked about the “magical $99 price.” Once a console drops to that price, mass market adoption can be huge. The PlayStation 2, one of the most popular consoles ever with more than 150 million units sold, hit its stride at $99. Nintendo’s history suggests that it sells its hardware for a profit. Nintendo has “no tolerance for selling hardware below cost,” said Jesse Sutton, CEO of Majesco. So it probably can’t cut the Wii’s price to $99 and still make a profit.

Still, hitting that $99 price will help the Wii match the price of its newest rival, the Android-based Ouya machine, coming out in the spring. Jeff Hilbert, managing partner at Digital Development Management (a game talent agency), says that part is “genius.” But Marco DeMiroz, CEO of mobile game maker PlayFirst, says that the $99 price is too high in the age of tablets and smartphones. This new machine just isn’t competitive with the experience you can get on subsidized mobile devices. He thinks it might work only if marketed outside the U.S. in emerging territories.

“It’s an appropriate price and offers a strong consumer value with a deep readily available software line-up,” said Jesse Divnich, vice president of insight and analysis at market researcher EEDAR. “The $99 price point shouldn’t be compared to the PlayStation 2, as most consumers viewed the PlayStation 2 as a DVD Player that also played games.  The Wii lacks a DVD playback function. The Wii mini won’t be a revival of the console, but instead targeting the extreme price sensitive consumer.”

In its glory years from 2006 to 2009, the motion-sensing Wii was so innovative and in such high demand that Nintendo didn’t have to think about cutting its introductory $250 price. Microsoft and Sony had more expensive machines, but the innovation in the Wii enabled it to race ahead and sell nearly 100 million consoles, compared to about 70 million each for the rivals. Sony has introduced cost-reduced versions of the PlayStation 3, and Nintendo is now taking a page from that book.

Of course, some of us wondered why Nintendo didn’t hit the $99 price earlier, with such an explosion of competition from the iPad, iPhone, and other new game platforms.

“Nintendo should have two years ago dropped the price on the Wii,” said Michael Zyda, head of the University of Southern California’s GamePipe Laboratory. “This is very late. Nintendo is on a path towards extinction.”

Loyd Case, a veteran journalist and hardware expert, wonders if there is a cost advantage to manufacturing the mini. It is smaller and uses less material, but the Wii components are made in such huge volumes that it might actually be more costly to start over and make some components in lower volumes, even if they are smaller. Blake Commagere, CEO of MediaSpike, said, “Not sure what the point of making it smaller is — it was already small, but it’s not like it’s any more portable now.”

“Removing Internet connectivity is a problem but Nintendo never had a good online strategy to begin with, so I don’t think it’s all that big of a deal,” said Anand Shimpi, head of the tech gadget site AnandTech. This is a cheap way of giving users access to Wii games, which is the whole point of a gaming console last I checked. It’s a great way to prop up sales of existing Wii titles.

Lastly, why launch in just Canada? It could be a test market. Or it could be the result of limited supplies. Or, as game veteran and DirectX co-creator Alex St. John says, maybe it is a test to figure out how much the Wii mini might cannibalize sales of the Wii U. If it does cannibalize sales, then Nintendo might shelve the Wii mini. If it doesn’t the Wii mini might get young kids started on the Nintendo life and eventually lead them to the newest console.

“I’d be inclined to call it a ‘gateway console for children,’ ” St. John said.

And veteran mobile developer Scott Foe says the mini is Nintendo’s message: “Wii are not dead yet.”

Nintendo created more questions than answers so far. But it’s fun to guess at what’s really happening. And it shows that those on the sidelines have no shortage of creative thinking.