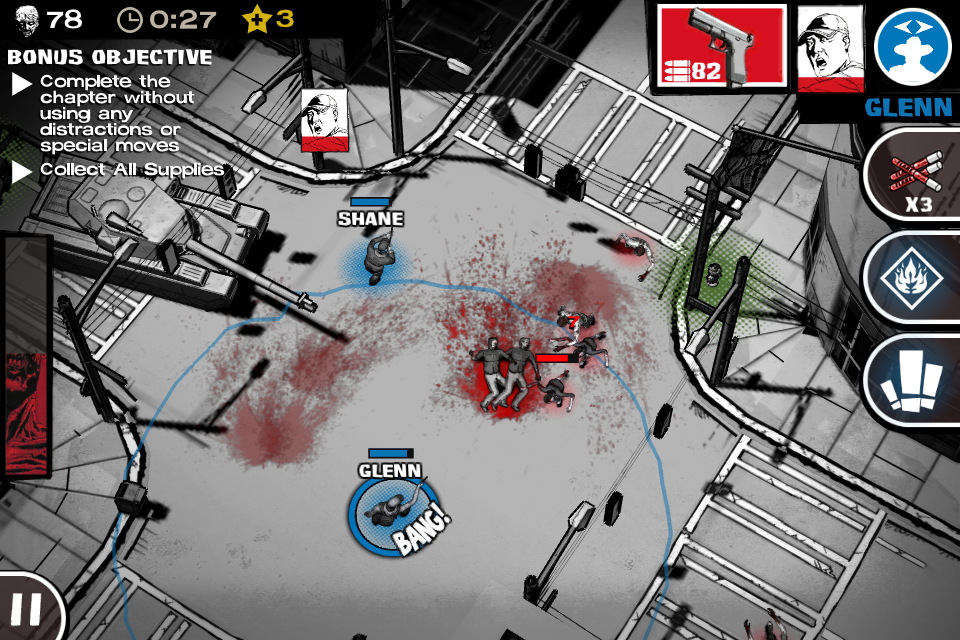 Nothing proclaims a franchise’s popularity like releasing a game in every genre.

That’s what Image Comics is attempting with its zombie series The Walking Dead. The long-running serialized books have already inspired a television spinoff, a Facebook game, and a multiplatform adventure game. Additionally, Activision is working on a first-person shooter that adapts the television show.

Among that throng of games, Skybound — The Walking Dead creator Robert Kirkman’s comic imprint — released its own game for iOS devices. The Walking Dead: Assault is out now for $1.99. It’s a top-down strategy shooter with black-and-white graphics except for the blood, which is a deep crimson.

Visually, it’s reminiscent of Madworld for the Wii.

The title plays like a shooter, only it’s very concerned with the strategy element of survival. Small waves of zombies attack your team of characters, which the designers ripped from the pages of the comic. Those characters fight off the walkers by firing weapons, which create noise that can attract more of the undead or even a giant herd of zombies.

So instead of just running around and blasting brains, players must use the environment, which provides ways to distract the reanimated corpses with other sounds.

Naturally, The Walking Dead: Assault is full of microtransactions. Players collect supply crates in the game that they can use to upgrade their characters, but they can also purchase crates for a small fee.