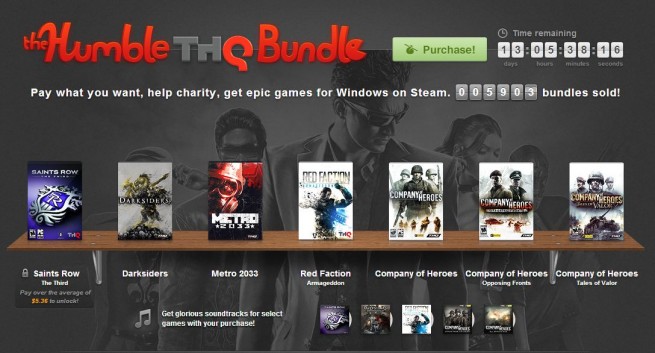 Now in its second day, the Humble THQ Bundle has racked up more than $2 million.

The Humble Bundle is a collection of games that customers can pay whatever they want for. The money is then split between developers, charities, and the Humble Bundle company.

So far, the biggest contribution has come from a THQ employee, but not any employee — $1,050 came from company president Jason Rubin.

Don’t worry, Jason Rubin isn’t paying THQ to play his own games. He elected to give the entire amount of his contribution to the Child’s Play and American Red Cross charities.

@sabre0001 My Donation was 100% Charity. That should not be interpreted as a recommendation to others on their split.

Naturally, Rubin is hoping others won’t completely follow his example, since THQ could use the money.

Over 400,000 people have purchased this bundle, which includes Darksiders, Metro 2033, Red Faction: Armageddon, Company of Heroes, and two Company of Heroes expansions. People that pay more than the average — since this bundle is pay-what-you-want — also get the excellent Saints Row: The Third.

The Humble THQ Bundle still has more than 12 days left to earn a hefty sum for the publisher, the charities, and the Humble Bundle organization.