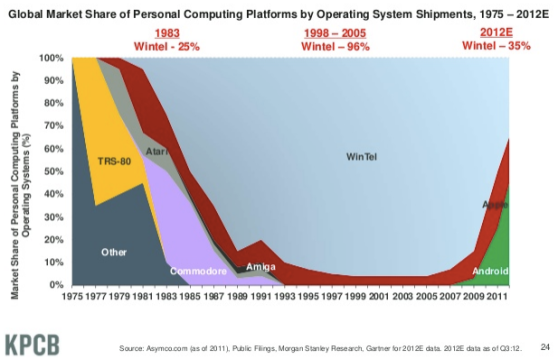 Meeker is delivering her report to a group of Students at Stanford University, and Kleiner Perkins is live-tweeting the presentation on Twitter at @kpcb.

This is an update to a report Meeker delivered in May 2012, and it’s got a ton of new information.

We’re still digesting the slides, but the slide above (#24 in Meeker’s deck) is a real standout. Echoing a similar graph of computer system sales from Horace Dediu at Asymco, it shows the dramatic shift away from Windows-powered Intel machines (Wintel) in the past few years. Apple drove a wedge into the Wintel monopoly, but it’s Google’s Android OS that’s really eating Microsoft’s lunch. Since Q4 2010, combined shipments of tablets and smartphones have exceeded the number of PCs shipped, Meeker reports, and that trend shows no sign of reversing.

Meeker’s presentation goes on to spell out how these device and connectivity trends are leading to the complete re-imagination of everything from encyclopedias to money itself. It’s a great presentation — you should definitely read it.

See the full slide deck below.