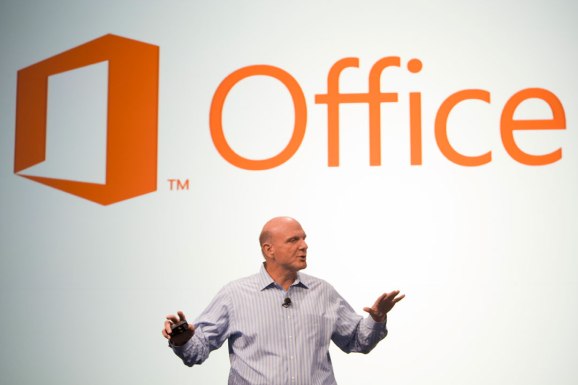 Microsoft Office 2013 is now available for purchase by business customers, but regular users will have to wait until the first quarter of 2013 to get their hands on a copy, Microsoft announced today.

Office 2013, as we’ve written previously, shows Microsoft updating one of its most important products with more style and support for more inputs, especially touch. The apps — Word, Excel, PowerPoint, Outlook, and more — come with the feature set you’d expect, but Microsoft designed the software to work better across all kinds of devices, including desktops, laptops, tablets, and hybrid tablet/laptops. It also has new cloud features, such as saving to Microsoft SkyDrive by default instead of saving to your hard drive.

Consumers and companies without Microsoft Volume Licensing will get their hands on the software “through retail and online channels” in the first quarter of 2013. Versions of Office 2013 that are available through the cloud and related products for businesses will come later as well.

If you haven’t played around with Office 2013, you can do a relatively painless trial through Office 365 for enterprises.

Take a look at the slides below for more looks at Office 2013: