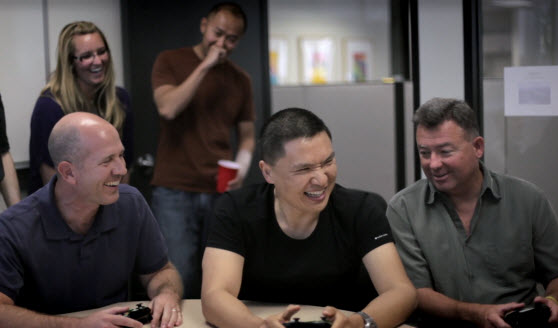 At Green Throttle Games, Charles Huang is creating a new virtual game console for the television based on mobile phones and without the actual game console. The Santa Clara, Calif.-based company is making a game controller that will work with Android smartphones and tablets when it debuts next year. The controller connects wirelessly with your smartphone or tablet, which connects via cable to display images on the television. The point is to make it easier to play the same games both in the living room and on the run.

Other companies like Ouya and PowerA, the maker of the Moga controller, are doing something similar and appear to have a head start. But Huang said in an earlier interview with GamesBeat that his company is seeking broader support, partly by building a full solution that includes a software development kit. The kit enables developers to adapt their games to work with the controller. On top of that, Green Throttle Games plans to partner with game companies to make its own first-party games that will enable two players to play the same game on a single television screen — much the way that today’s game consoles work. Huang said the full solution could usher in a new level of innovation for games and disrupt the existing $60 console game business at the same time. This kind of confrontation could set up a larger battle — one that is already in motion. The likes of Samsung, Apple, Google, and Amazon are on one side.On the other side are the existing game incumbents Microsoft, Sony, Nintendo, Electronic Arts, and Activision Blizzard. Microsoft has moved in the direction of Green Throttle with its second-screen solution, SmartGlass. But it is not fully supporting the idea of taking games from Windows Phone 8 and playing them directly on a TV set. By the same token, Sony is not about to take PlayStation Mobile games and enable them to play on a TV set in direct competition with Sony’s own PlayStation 3.

No single company stands fully in one camp or the other, but all of them are figuring out a way to dominate either gaming or the living room — or both. Dedicated game devices are in a war with broader-purpose smartphones and tablets. Bringing mobile games into the living room is tantalizing for the future of gaming. Most game consoles sell no more than 100 million units in their lifespans. Samsung may sell that many smartphones in two quarters, and Apple may sell that many in a year.

“We believe a large percentage of consumers will use their phones or tablets to play games on a TV, and mobile-to-TV gaming could quickly grow to surpass the console market,” said Huang in a statement today. “By building a straightforward way to enjoy mobile games together with your friends, we hope to revolutionize how mobile games are played.”

“The ability to play mobile games on a big screen TV is very attractive, and Green Throttle’s leadership is well poised to bring in the kind of top quality games and industry connections that are needed to turn the Atlas controller and Green Throttle’s solution into a household name.  I have always surrounded myself with entrepreneurs who know how to delight their end users and Green Throttle aims to do just that,” said Ajay Chopra, general partner at Trinity Ventures.

“Advancements of the last several years have redefined consumers’ experiences on mobile devices. I believe that in the next 24 months, the smartphone will reach beyond the few inches of its own display to massively disrupt and cross over to previously independent platforms. I am thrilled to be working with such experienced innovators in reinventing the living room gaming experience,” said Jason Krikorian, general partner at DCM.