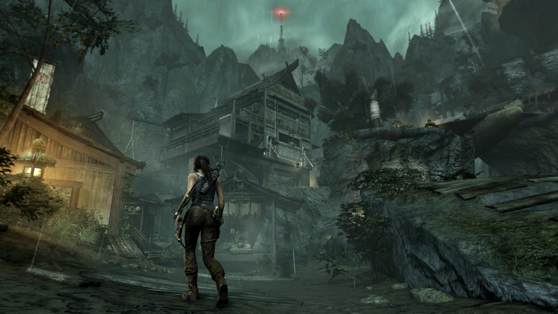 As one of Sony’s most popular franchises, Uncharted hardly needs validation these days. But if you need a reminder, then look no further than the repeated references through the media and elsewhere to Tomb Raider as an “Uncharted clone.”

Tomb Raider, obviously, has been around much longer than Uncharted, but it’s also had a checkered past. Once a critical darling, it slowly but surely degenerated into an also-ran franchise, joining the likes of Sonic as one more ’90s video game series that had definitely seen better days. In that light, taking a page from its more popular spiritual successor might not be a bad idea.

But while the similarities to Uncharted are definitely there — the set pieces, the art style — Tomb Raider seems ready to move in its own direction. This is a good thing because when it tries to emulate Uncharted, it tends to fall flat.

The differences begin with the setting. Unlike the globetrotting Uncharted, which generally takes it cues from Indiana Jones, Tomb Raider keeps to one island. It’s more like Lost than any Republic movie serial from the 1930s. The disaster that lands Lara Croft and her crew on the island, the ancient civilization that once inhabited the island, the interlopers trying to plunder its secrets — all are reminiscent of J.J. Abrams’ popular television series.

The decision to put Lara Croft on an island, however, has less to do with emulating Lost than turning the lens on Lara Croft and giving her a chance to grow, says Crystal Dynamics global brand director Karl Stewart. The development team tends to think in terms of Cast Away with Tom Hanks — an odd fit for an action franchise like Tomb Raider maybe, but its influence can nevertheless be felt in the overall tone.

“Lost was just a great canvas,” said Stewart. “When you look at that island and the mystery that’s going on with that island, it’s just a setting. But when you look at Cast Away and what Tom Hanks is doing, it’s more inside his head and how he was reacting to situations. So for us, it was a great opportunity to be able to position Lara in a place where she could grow and evolve with the people around her, but she also spends a lot of time alone. So what does she think? How does she overcome these situations?”

Cast Away’s influence is felt most acutely when Lara is huddled around a campfire trying to keep warm, logging entries in her journal, and upgrading the equipment she needs to stay alive against the island’s myriad threats. Tomb Raider has sense of loneliness and vulnerability that’s usually absent in games like these. It’s kind of a shame that Tomb Raider mostly downplays the actual business of eating, dressing wounds, and building fires, because it feels like a kernel of a really interesting survival game is here.

Regardless, tying Lara down to one island has a variety of interesting consequences for Tomb Raider, the most tantalizing being the additional freedom it affords. If Uncharted has a weakness, it’s the franchise’s love of the cinematic. Naughty Dog is out to tell a story, and they have no intention of allowing the player to interfere with the way that the story plays out. By contrast, Stewart utters a very interesting word in connection with Tomb Raider: Metroidvania. 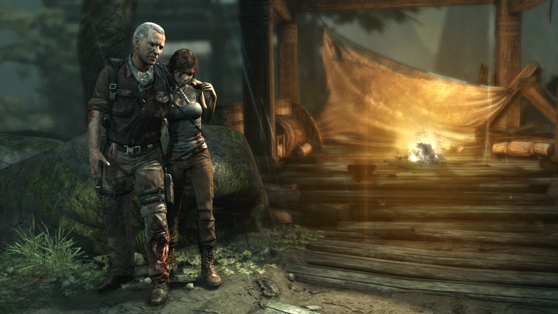 A mashup of Super Metroid and Castlevania: Symphony of the Night, the term “Metroidvania” describes games with sprawling worlds, lots of freedom to explore, and areas that can only be opened up with certain items. They are, as it happens, the complete opposite of a game like Uncharted. So when someone like Stewart throws out a term like Metroidvania in connection with Tomb Raider without prompting, it’s worth taking note.

Stewart cautions that Tomb Raider is not a true open-world game, but it does feature its share of backtracking. It encourages players to return to areas they’ve previously explored and open up new locations with the items they’ve found elsewhere — hence the term “Metroidvania.” The island is a vivid, persistent world, and Lara Croft is meant to feel like a part of it.

“It’s Metroidvania in the sense that you can go back and become an explorer,” said Stewart. “When I was in the night hub, I didn’t care about exploring. I just cared about getting to the radio tower. But now that I’m further into the game, I care more about the intrigue and what’s going on. I want to unlock the mystery. And in order to do that, we’ve given you the ability to go back in and re-explore.”

The point where the world begins to open up lies somewhere beyond the first three hours of the story, which constituted the extent of the Tomb Raider demo. Much of the early going is spent picking up weapons like the bow, avoiding Russians, and trying to ascertain the whereabouts of Lara’s fellow crew members. Even in the opening hours, however, there’s some exploration to be found. At one point, Lara gets an opportunity to put her climbing axe to good use in uncovering a hidden tomb.

Such scenarios represent Tomb Raider at its strongest: those Cast Away-like moments when Lara Croft is huddled around a fire alone or else exploring the ruins of some abandoned village. It’s a game that holds out as long as possible before finally giving you a gun, and in those quieter, more considered times, it’s easy to buy into Crystal Dynamics’ assertion that Lara Croft is an explorer and a survivor.

By the same token though, the de facto set piece moments seem to represent the new Tomb Raider at its weakest. Once again, Uncharted is an inevitable point of comparison here, and Tomb Raider’s action generally pales in comparison to its descendant. Lara doesn’t animate quite as well as Nathan Drake, the action feels a bit clumsier, and the set pieces aren’t quite as creative. It has any number of stealth sequences, all of which feature wooden enemies that are easily avoided. One sequence that involves escaping a room full of gas and then tossing fiery debris back through the vent to ignite the gas and cause it to explode is typical. It’s nothing that hasn’t been done a million times before.

It seems a little like Crystal Dynamics is overly conscious of the competition — as if it absolutely has to have a certain ratio of action to exploration. At one point, Stewart mentions that 90 minutes was the longest they felt they could go before giving the player a gun. This idea that Lara absolutely has to spend a certain amount of time shooting bad guys — that there absolutely has to be Uncharted-style set pieces — may be what holds Tomb Raider back in the end.

That said, Tomb Raider has potential. If Crystal Dynamics really does follow through on the exploration — the Metroidvania aspects — and tells a decent story in the process, it could end up being a very good game indeed. At this point, the best thing Crystal Dynamics can do is downplay the Uncharted-style action and continue working to give Tomb Raider its own identity. After all, who needs Nathan Drake when you’ve got the original Lara Croft?