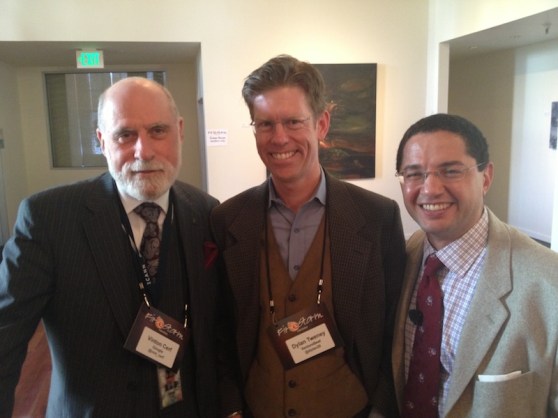 Vint Cerf is one of the two or three people who can rightly claim to have invented the Internet. Now he’s worried about its survival.

Specifically, he’s concerned about the World Conference on International Telecommunications, happening now through December 14 in Dubai. At this meeting, for the first time since 1988, the countries of the world will gather to try and update international agreements on how to handle data, voice, and other communications technologies.

Here’s the danger: Certain countries want more control over the Internet. According to the Open Net Initiative, 42 out of 72 surveyed countries do some kind of filtering and censoring of Internet content, while 21 do “substantial” or “pervasive” filtering — and that’s not even counting North Korea or Cuba.

Lest you think this applies only to “repressive” countries, keep in mind that the U.S. is the #1 country asking Google for more information about its users. That’s not censorship, but it still could be a threat.

Imagine if you had something politically sensitive to post about corruption in Washington, D.C., so you posted an anonymous YouTube video. If the FBI asked for it, Google might give them details that could lead them to your identity.

That’s just one of the examples why openness and anonymity are still important.

Cerf spoke recently at the Egnyte Firestorm conference in San Francisco, where I was a speaker. See below for a video of Cerf’s speech, which covers the entire history of the Internet — no kidding! — in about half an hour, all the way up to Internet-connected wine cellars and the ITU threat. I was honored to meet the man, and of course I took the chance to ask him what he was working on.

(By the way, Cerf really did invent the Internet, or at least the most important part of it: Together with Robert Kahn, Cerf concocted the Internet Protocol [IP] and Transmission Control Protocol [TCP], which, together, underlie nearly all Internet communications. He’s now the chief Internet evangelist for Google.)

At the conference where I met him, he’d just returned from a meeting of the Internet Governance Forum in Baku, Azerbaijan — the kind of dry, technocratic meeting that a man like Cerf must spend his life flying to — but the first thing he mentioned was the emergence there of a faction of countries that want to limit free speech and the unfettered ability of people to connect to the net. He expanded on that Dec. 2 in a guest article for CNN.com:

Several authoritarian regimes reportedly propose to ban anonymity from the web, making it easier to find and arrest dissidents. Others have proposed moving the responsibilities of the private sector system that manages domain names and Internet addresses to the United Nations. Yet other proposals would require any Internet content provider, small or large, to pay new tolls in order to reach people across borders.

The upshot? The next garage-based phenomena would face a steep and probably insurmountable financial hurdle in its effort to become the next YouTube, Facebook, or Skype.

Rules like this would put a huge crimp into the Internet’s “free and open” principles, which is why Cerf and others are calling for people around the world to sign a pledge of support for openness.

Maybe it’s no surprise, but I’m in favor of Cerf’s petition. Openness and transparency are critical to the Internet’s survival.

The pledge has attracted over 2 million electronic up votes to date. You should add yours.

But its real impact is probably minimal, at least in the short term: The ITU meeting will happen behind closed doors with what Cerf told me was a complete lack of transparency, and nobody at the ITU meeting is going to pay much attention to this website.

Still, signing the pledge is a good way to raise awareness and, eventually, political pressure on the administrations sending delegates to the ITU. It’s also a good heads-up that these requests for control might come dressed in language that sounds much more innocuous.

For example, Cerf warned that governments would likely couch their demands for control in terms of protecting citizens — from, for instance, spam. But the upshot would be an end to the freedom we’ve enjoyed for decades.

In reality, many countries want to control access so they can prevent dissidents from using the Internet to organize, without having to shut down the entire country’s Internet access, as Syria recently seems to have done. And they want to control content for a variety of reasons: to prevent seditious material from getting in the hands of their citizens, to enforce content laws like Germany’s ban on Nazi propaganda, and to help enforce copyright law.

“History is rife with examples of governments taking actions to ‘protect’ their citizens from harm by controlling access to information and inhibiting freedom of expression,” Cerf concluded in his essay today. “We must make sure, collectively, that the internet avoids a similar fate.”