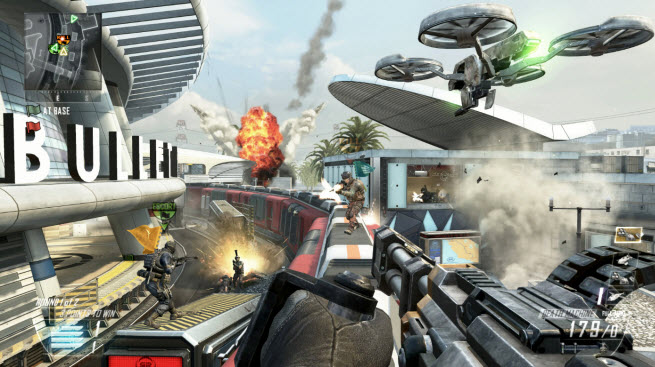 Activision Blizzard announced today that Call of Duty: Black Ops II has sold $1 billion worth at retail on a worldwide basis in just 15 days.

To be sure, movie tickets are priced lower than $60 games, so more people saw Avatar. Still, the statistic shows both the cultural reach of the Call of Duty series, which holds the record for the fastest-selling game series of all time, and also underscores its financial power.

“The release of Call of Duty has been one of the most significant entertainment events of each of the last six years,” said Bobby Kotick, the chief executive of Activision Blizzard.

Since the latest Call of Duty’s launch, players have logged more than 150 million playing Black Ops II multiplayer on Xbox Live and the PlayStation Network.

“Entertainment franchises that captivate audiences for as long as Call of Duty has, on the scale that Call of Duty has, are very rare things. And it takes a lot of brilliant people working across many different disciplines to make it happen, ” said Eric Hirshberg, the CEO of Activision Publishing. “It is incredibly humbling and gratifying to be a part of. In order for Call of Duty to remain the entertainment juggernaut that it is, and keep our fans coming back for more, we need to continue to bring fresh ideas and new innovations to the table every time, while always staying true to what people fell in love with in the first place. That’s what we did with Call of Duty: Black Ops II, and that’s what we intend to keep on doing. This is an incredible milestone for an incredible franchise, and I want to thank every passionate, talented, committed person on our team who made it happen.”

Atul Bagga, an analyst at Lazard Capital, said in a research note that Black Ops II may have gotten an extra bump this year because of the later release date on Nov. 13, compared to last year’s Nov. 8 release date. This year, Black Ops II was able to capitalize on Black Friday sales on Nov. 23 within its 15-day window. Modern Warfare 3, on the other hand, did not have that benefit in its first 16 days. He also noted that the amount of hours logged on Xbox Live and PlayStation Network in the first 22 days suggests that the engagement is actually down. Previously, Activision said it had 600 million hours logged for the first 42 days of Black Ops in 2010 and 1.6 billion hours for the first five months after Modern Warfare 3 launched in 2011.

As a result, he expects that Black Ops II sales could be down in single-digit percentages compared to Modern Warfare 3.