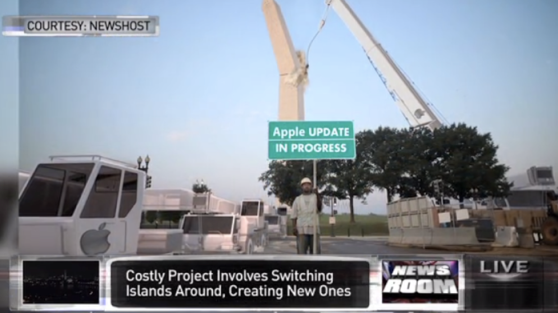 Apple’s Maps debacle may be old news by this point, but that isn’t preventing faux-news site The Onion from making fun of it. The parody site’s latest video offers Apple a pretty thoughtful suggestion: Rearrange the planet so that it matches the software’s glitchy output.

“Apple is committed to providing the best user experience possible, which is why we are working to dismantle the Brooklyn Bridge and put London in Canada,” Apple CEO Tim Cook told The Onion.

“Public transit directions won’t be necessary in the new world as there will be no public transit,” Cook added, referring to Maps’s lack of public transit information for cities like New York.

The fictional Tim Cook’s response is very different from that of the real one. Cook apologized for the software’s bugs in a September letter. “We fell short on this commitment. We are extremely sorry for the frustration this has caused our customers and we are doing everything we can to make Maps better,” he wrote.

While The Onion pokes fun at Apples’s Map troubles, the situation has been so serious that it led to the sacking of Richard Williamson, the former senior director of iOS platform services. Former iOS VP Scott Forstall also left the company after he reportedly declined to sign Apple’s letter publicly apologizing for its Maps flaws.