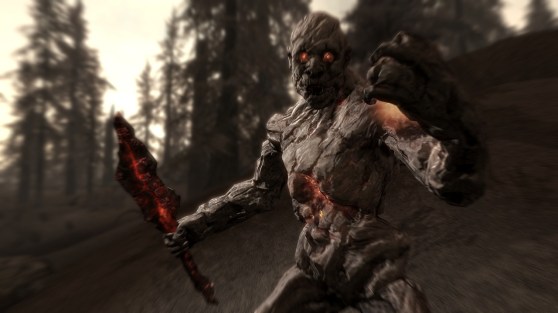 You’re walking peacefully along the ash-covered shore on the island of Solstheim, marveling at the massive mushroom trees in the distance when, suddenly, a flaming spider explodes in your face! Dragonborn, you’re in Morrowind now. …

The Elder Scrolls V: Skyrim’s latest expansion takes players to the Morrowind-adjacent island Solstheim, a place bathed in ashes from the volcanic Red Mountain and teeming with a variety of beasties that really want to kill you. This is the first Skyrim expansion to take players outside the snowy confines of Tamriel’s northern territory, and that’s not entirely good. Players familiar with past Elders Scrolls games likely remember Solstheim while those new to the franchise will see it is an ugly, ash-covered wasteland.

Such a desolate place is a perfect backdrop for an epic battle against a power-mad figure from Skyrim’s history. The original Dragonborn Miraak was not a champion like Skyrim’s protagonist. Instead, he served the dragons as a priest before mysteriously turning on them and attempting to enslave all of Tamriel. Since your character is also a Dragonborn, it’s inevitable that your paths will cross.

It’s just a shame that the journey to the ultimate dragon-soul-eating showdown is fraught with frustrating dungeons and truly annoying enemies. 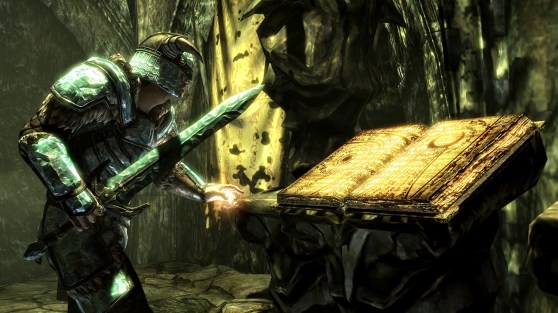 Black books
The Daedric prince of fate and knowledge Hermaeus Mora returns in Dragonborn in a big way. His powerful black books are hidden all across Solstheim, each one teleporting the reader into his bizarre and dangerous Oblivion plane.

Like the horrific source of enchantment magic called the Soul Cairn added in Dawnguard, Hermaeus Mora’s world is radically different from both Solstheim and Skyrim. Icky, green-black pools full of tentacles stretch as far as the eye can see while writhing corridors full of spinning book pages twist their way over its inky surface. Mora’s influence is primarily dangerous knowledge, and his world is a demonic library.

Aesthetically, Hermaeus Mora’s plane is amazing. You’ll never spend more than 40 minutes inside a black book, and that’s the perfect amount of time to set you on edge as a sea of Lovecraftian horrors wash over you. I’ve always thought H.P. Lovecraft’s elder gods inspired the Daedric princes, and the black books reflect that perfectly.

A little slice of Morrowind
It’s really cool to get a glimpse of Morrowind in Skyrim. While Solstheim is on the edge of Morrowind’s map, it perfectly reflects the landscape. You can see the Red Mountain billowing ash into the air just off the island’s coast, and that draws a lot of the territory’s native fauna. Those floating brain-tentacle beasts called netch peacefully hover over the coastline and sometimes meander through the magical mushroom trees that dark elf wizards live in.

While an ash-covered landscape might not sound as beautiful as the snowy cliffs in Skyrim, Solstheim has character. It also has its own mountains, where a race of nature-worshiping Nords called the Skaal live.

Ultimately, Solstheim is a great trip away from Skyrim and leaves me wondering if other parts of Tamriel will make their way into the game in future expansions. I like the idea of exploring a large part of the continent in one game without it turning into an online experience. 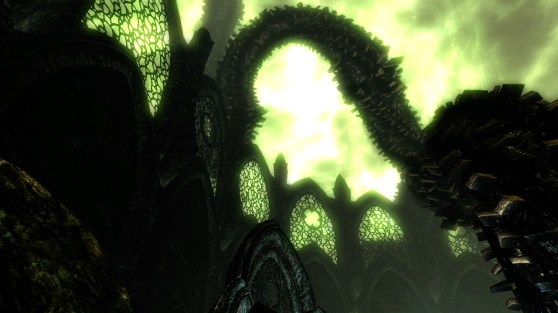 New items and spells
One of Bethesda’s biggest selling points for Dragonborn is the ability to tame and ride dragons around, but that isn’t my favorite addition. What I like even more is a new powerful set of spells and a crazy suit of lightweight armor that offers 100 percent protection if you can find all the pieces.

Dragonborn more than makes up for the lack of new weapons introduced in the previous quest expansion, Dawnguard. Players now have access to a variety of ebony weapons, enchanted Daedric swords, and a new kind of crafting material that is best described as metallic ice. A lot of existing armor types also get a new coat of paint, giving players more variety when finding the right armor for their characters.

It’s a horror story
Rather than defending the sun from vampires or preventing dragons from regaining their grip on Tamriel, Dragonborn focuses on how dangerous and powerful knowledge is. Miraak, the new antagonist, was once a dragon priest until he learned something that caused him to switch sides and start slaying dragons for personal gain. Miraak’s thirst for power oozes madness, and that is spreading across Solstheim.

When you first arrive on the island, you’ll notice a glowing green pillar just off the coast. If you activate it, your character abruptly starts building a shrine while other workers drone on about remembering past glory. Something is very wrong on Solstheim, and no one can explain why they’re compelled to build the shrines littered across the island.

The moment my character started building the shrine and a weird voice spoke about Miraak in a disjointed way, I knew I had to see the story through.

Dwarven ruins
All right, so I really don’t like Dwarven dungeons, and I think Skyrim’s various plots rely on them too heavily. Exploring Dwemer cities should feel cool and mysterious since you’re rummaging around in the ruins of a civilization that dared to blend dark magic with science, but I look at all that steam-powered machinery and see nothing but tedium. In Dragonborn, these areas get a lot more excruciating thanks to water puzzles.

Yes. Water puzzles. Like a terrible flashback to The Legend of Zelda: Ocarina of Time, the main quest in Dragonborn requires you to manipulate water in a sunken Dwarven city all while new and frustratingly overpowered automatons attack you.

It would be great if for once an epic quest didn’t involve an empty mechanical city full of annoying robots. I get that the Dwarves wiped themselves from existence by being too curious, but at this point I play through new Skyrim quests dreading the next decent into one of these steam-powered nightmares. 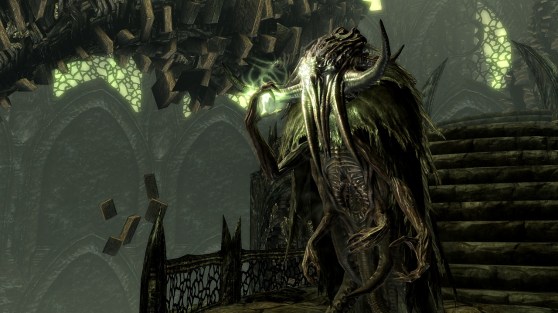 Poor performance
I don’t go into Bethesda-developed games expecting a flawless experience. Massive, open worlds lend themselves to all sorts of unpredictable hitches, but Dragonborn’s problems are too predictable.

Whenever you go into a black book or get magically transported across Solstheim, the game freezes for 15-30 seconds. Anytime you get stuck between a dragon and one of the new enemies called lurkers, everything locks up again. And if you ever need to fire arrows in quick succession or blow back a group of monsters with a shout, be sure you’re ready for your attacks to fall flat.

These are just a few of the problems I’ve had with the latest expansion, and they’re incredibly frequent. I’m not sure if it’s because the Solstheim map is entirely new or all the layers of add-on content are working at once, but the constant slowdown and performance issues made playing through Dragonborn a major hassle. My system crashed a few times, but worst of all was getting killed in a fight and reverting to an old autosave just because my arrows fell limply to the ground a few feet in front of me.

If you are eager to play this expansion, I recommend being very patient and manually saving anytime you think you’re coming up to a big fight. You’ll save yourself a lot of grief. 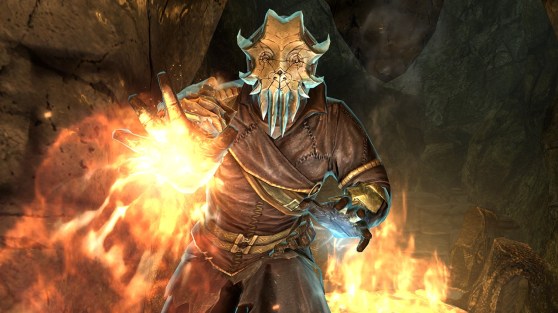 You will die
The character I’ve used to review both Dawnguard and Dragonborn is a level 62 dark elf named Ataeri. He’s an assassin/thief with an emphasis on two-handed combat and archery, and most of the time that works perfectly. Except in Dragonborn.

Monsters and enemies in Solstheim love to swarm you. Ataeri’s strength lies in quick, stealthy attacks or ranged combat, and neither of these skills apply when the things you’re fighting rush you all at once. I’ve rarely encountered battles in Skyrim where I feel completely outnumbered and underpowered ever since leveling my character up to 62, but Dragonborn makes my beloved character feel very weak.

Obviously, no two player-characters are alike, but one thing remains the same: Enemies in Dragonborn are very aggressive and hit incredibly hard. I’m sure a more hand-to-hand focused character would fair better than mine, but it’s absurd that my character is so well leveled (and pretty protectively dressed) and is still dying like he’s going in naked.

I was not expecting to walk into Dragonborn and finish it easily, but I did want my hard work to mean something against new enemies.

Difficult to start
Much like Hearthfire, starting Dragonborn is a bit difficult if you don’t know what you’re looking for. Ideally, a group of Miraak-worshiping cultists will stop you on the road in Skyrim and try to kill you, but I walked from Solitude to Whiterun and never had this happen. Actually, the cultists didn’t attack me until after I’d taken a ship from Windhelm to Solstheim.

I don’t think adding in-game directions for downloadable content is a bad idea. Sure, a seamless story experience is cool, but sometimes a screen saying, “Go to Windhelm if you want to go to Solstheim,” is way more useful than leaving your introductory event up to chance.

Dragonborn is a creepy descent into madness set in a mini Morrowind that isn’t quite as epic as Dawnguard, but it compensates for that with a wealth of new items, shouts, and spells. Its performance issues and overreliance on Skyrim storytelling tropes are difficult to ignore, but beneath all the frustration is a great adventure that examines the power of knowledge and how far one man will go to rule the world.

The Elder Scrolls V: Skyrim expansion Dragonborn launched December 4 on Xbox 360. Bethesda provided a download code for the expansion pack for this review.