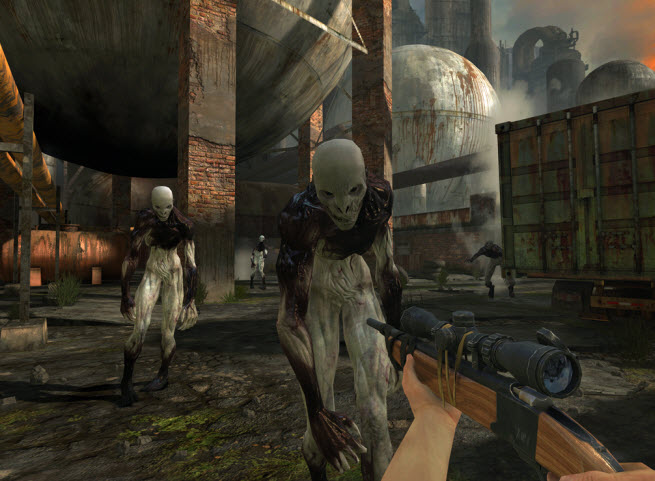 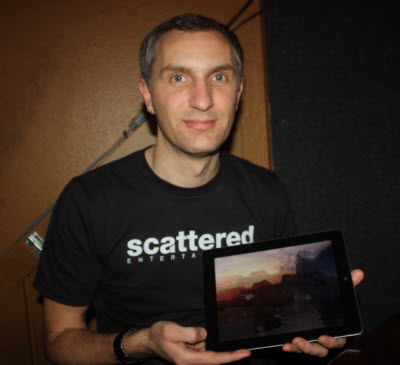 The Drowning features outstanding 3D graphics for a mobile game, and it is the first title developed by Scattered Entertainment, a DeNA-owned studio in Stockholm Sweden with veterans hired from Electronic Arts’ DICE studio, the maker of the Battlefield series of video games. If The Drowning succeeds, it could establish a new mobile version of the first-person shooter market, which generates billions of dollars each year with games like Halo 4 and Call of Duty: Black Ops II on consoles.

The studio is headed by Ben Cousins, a former EA and DICE executive, and its mission is to take mobile games to the next level.

The studio is trying to pull off what has been impossible so far: making an original first-person shooter that works well on a touch screen. Most FPS games require a mouse or game controller. It’s too hard for most players to use touch-screen-based controls to shoot, move a character’s body, and change the direction the character faces all at the same time.

But Cousins (pictured) showed in a demo that his team has come up with a clever solution. In The Drowning, you tap two fingers on the screen to shoot your gun at any given point. The shot is fired at the midpoint between your fingers. If you want to walk somewhere, you simply tap once on the screen and the character automatically moves to that spot. If something is in the way, the character finds its way around barriers and eventually moves to the spot. To look somewhere, you simply swipe across the screen.

These gestures are relatively simple, and they can work well on a touch screen once you get used to it, Cousins told GamesBeat. He said the company has applied for a patent on the gestures.

“Mobile gamers are not tied to the living room,” said Cousins. “We are an ambitious studio and have set an ambitious goal. We want to become the No. 1 mobile studio for core gamers.”

The Drowning will also have a compelling story, he said. It starts out with the mysterious deaths of birds and leads to a worldwide catastrophe where people are dragged into oil spills and turned into zombies. As a survivor, you have to collect ammo and shoot your way through a variety of missions in a single-player campaign. Survival won’t be easy in a world where unexplained oil spills transform millions into soulless creatures. The game will have 50 weapons available upon release, and more will be released post-launch.

“We love a challenge as a team, and we love to take risks,” said Cousins.

The game is very ambitious, and Cousins said the studio built it over the past year with a team of 20. Clive Downie, the chief executive of Ngmoco in San Francisco, said in an interview that the company is trying its best to innovate in free-to-play mobile games, and now it will reinvent what it means to be high quality with The Drowning. The game will be out on iOS in early 2013, and it is one of many coming out from Ngmoco/DeNA. Cousins said the team has worked on FPS titles such as Halo, Crysis, Battlefield, and Far Cry. Their job is to deliver products like that on tablets and smartphones. They have a good start with The Drowning. Cousins says that core gamers have been frustrated that they can’t get the same depth, tone, and feel of hardcore games on mobile.

The Drowning will be available on Mobage, DeNA’s 21-month-old mobile gaming network. That network has had more than 19,000 man-hours of engagement by consumers to date. Players hail from 191 of the 193 countries in the world.

DeNA generated more than $1.8 billion in revenues last year, and it is expanding aggressively in the U.S. and the rest of the world. It has more than 45 million users and 2,000 games.

Here’s the trailer for the game.