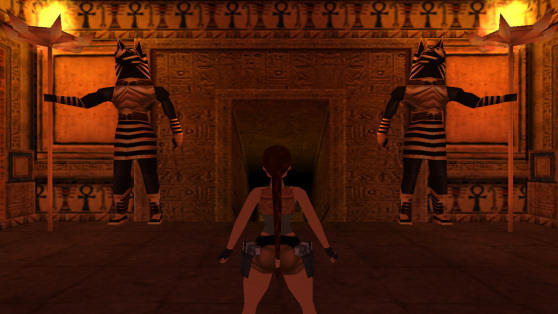 So you bought the first five Tomb Raider games that recently hit Steam, and your collection is complete. Hang on, treasure hunters. You’re still missing a few.

The early Tomb Raider action-adventure games are available on a variety of modern platforms: PlayStation Network and PC via GOG.com and most recently Steam. But previous Tomb Raider developer Core Design also released a number of add-ons and standalone expansions for PC that are nowhere to be seen. Unless you own the original discs, you can’t play them even if you find a download online.

This extra content is substantial, too. The first of the Tomb Raider Gold games for PC and Mac arrived two years after the release of the original Tomb Raider. This version contained four bonus levels on a second disc: “Shadow of the Cat,” where female lead Lara Croft searches for a tomb devoted to the Egyptian cat goddess Bastet, and “Unfinished Business,” where she ventures back to Atlantis to destroy, well, mutant creatures guarding an alien hatchery.

Tomb Raider II Gold featured five bonus levels (“The Golden Mask”), The Lost Artifact was a brief sequel to Tomb Raider III, British newspaper The Times released an exclusive level for The Last Revelation in collaboration with publisher Eidos, and Chronicles sold with a level editor.

We asked Stellalune (who goes by her pen name online, not her real name), the owner of the popular and long-running Stella’s Tomb Raider fan site, whether it’s possible to play these lost levels another way. She doesn’t think so.

“In a perfect world, all the expansions would be available on all systems,” she said. “But sadly, I don’t make those decisions.”

Are the extras even worth it? “I really enjoyed all the Tomb Raider bonus levels, and I think they’re just as well designed and fun to play as the main games,” she said. “[They’re] also just as weak on plot, but I don’t really care about that much. I just like exploring, solving puzzles, et cetera. That said, I don’t think any of them are essential to the Tomb Raider experience.”

She added, “I’m still a little cranky that they never released the Xbox 360 Underworld bonus levels for other systems since those add-ons actually do add to the plot of the main game.

“Meanwhile, there are also tons of amazing user-created games done with the Tomb Raider Level Editor. I haven’t had a chance to play even a tiny fraction of what’s available, but sites like trle.net, skribblerz.com, [and others] are great places to start if you’re interested in tons of free Tomb Raider.”

GOG.com’s Trevor Longino confirmed that the site does offer the extra level in Revelations, at least.

“We signed the rights to the Tomb Raider 1-3 Pack, which is what we released,” he said. “We did not sign the Gold editions of Tomb Raider One and Two, but we’re looking into the possibility of adding them to our catalog in the future.”

We also reached out to Steam but have yet to receive a response.