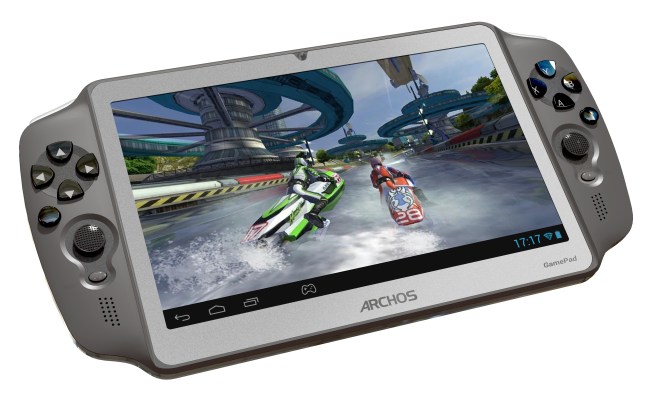 It’s a controller and a tablet. It can play games and browse the Internet. It’s the GamePad.

No, this is not the new Wii U GamePad from Nintendo. It’s an Android-based GamePad from hardware manufacturer Archos. This device features Android 4.1 Jelly Bean and a 7-inch touchscreen housed in a design that features full physical game controls.

Of course, this GamePad has nothing to do with Nintendo’s new home gaming system. It just shares the name and a similar look, but Archos’s device is all about Android apps and games. It’s available now in Europe for €149.99 (or around $199.99), and Archos will launch it in North America in early 2013.

“The GamePad is an Android device above all, and uses standard recognition of physical buttons in the same way a game controller plugged into a tablet works,” Archos’s manager of third-party apps, Phil Geldard, told GamesBeat.

While only a minority of Android games feature built-in support for physical controls, that won’t matter since Archos designed a new button-mapping software for games with onscreen controls. Gamers can map soft buttons to the physical controller for a more tactile and accurate play experience.

You can quickly create a mapping profile using the elegantly designed tool. Players can drop little flags on the screen directly where the software button is and then select a physical button that will correlate with that designated onscreen indicator. It’s an easy-looking process that you can see in more detail in the video above.

Of course, tons of mobile games make no sense with a physical controller.

“World of Goo, for example – a game made to be touched — cannot be ‘mapped’ with our tool,” said Geldard. “But that is why the Archos GamePad also has a 7-inch capacitive touchscreen, so you can play both types of games. Obviously, there is nothing stopping you from doing a combination of the two at the same time.”

I asked Geldard about Nintendo’s GamePad and he told us that his company’s device is very different.

“Well, to start with, the Archos GamePad isn’t tied to a console that is plugged into your TV,” he said. “It actually has hardware inside of it, which makes it portable.”

That’s opposed to the Wii U’s GamePad, which must remain within the short range of the Wii U console.

“But it’s also a fully featured Android tablet,” added Geldard. “So it’s great for the Internet, standard apps — like YouTube, email, and Skype — and multimedia.”

Geldard also pointed out that the Android tablet has full access to the Google Play store and is fully compatible with its 700,000-plus apps.

“And with all the games available on Google Play, there is already a huge library.”