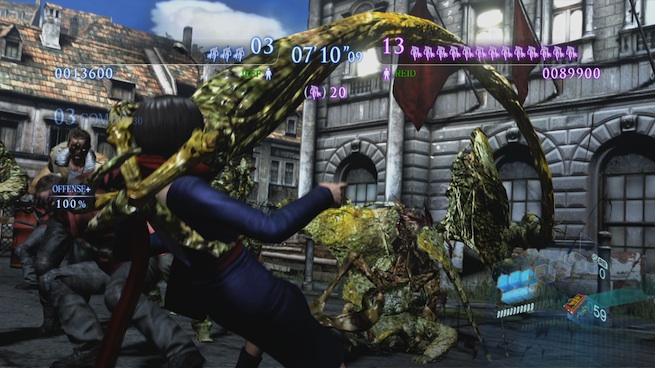 Competitive online multiplayer isn’t something that the Resident Evil franchise is known for. Resident Evil: Operation Raccoon City tried to change that earlier this year, but that didn’t turn out so well. And the recent release of Resident Evil 6 only flirted with the idea in its Agent Hunt mode, where you can “invade” someone else’s playthrough of the story by taking control of either the zombies or the mutating J’avo creatures.

On Dec. 18, Capcom is expanding Resident Evil 6’s multiplayer options on the Xbox 360 — with the PlayStation 3 to follow after an unspecified amount of time– with three new modes: Survivors, Predator, and Onslaught. Priced at 320 Microsoft Points ($4) apiece, or 720 points ($9) for a bundle that includes all three, these new downloadable content packs aren’t exactly an impulse buy. So let’s breakdown what each mode offers to see if it’s right for you. 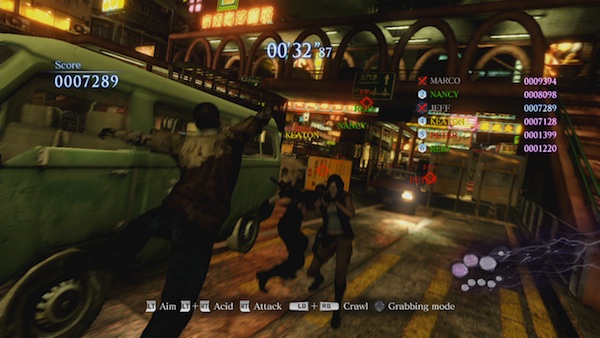 What is it?
Survivors is Resident Evil’s version of the tried-and-true deathmatch rules found in most multiplayer games, where up to six people can re-create their favorite character matchups from the campaign. The difference here is that when you die, you don’t just wait for a respawn timer — you come back either as a zombie or a J’avo (depending on the map) to fight again. And if you manage to kill any of the leftover humans, you return as your chosen character. If you fail to do so, you just keep playing as a member of the undead. The match ends when no other agents are left on the battlefield.

Impressions
The main appeal of this mode is the same with Agent Hunt: You get to join the enemies’ ranks and wreak havoc with their own special attacks. It was fun for a few rounds, but it didn’t hold my attention for very long. 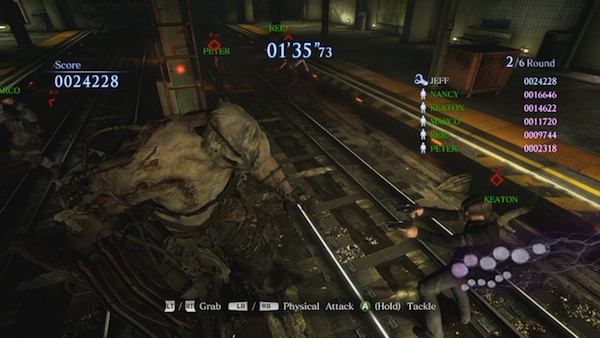 What is it?
Also playable with up to six people, Predator picks one player to control Ustanak, the disfigured behemoth that chased you down during Jake’s and Sherry’s chapter in the single-player story, while the others fight with their characters as a team. After a round is over, the mode cycles through all the players to choose the next Ustanak, so everyone will get a chance to play him.

The goal isn’t so much as to kill Ustanak (though you still get points for shooting him) as it is to just survive. The best way to earn points is by helping your team, like reviving them when they’re down. The winner of the match is whoever earns the most points by the end.

Impressions
Ustanak is incredibly fast, and it was entertaining to grab another player from a distance with his mechanical arm and use them as a human club against their teammates. But no matter how strong or big Ustanak is, the control scheme seriously limits his potential. It’s kind of silly that a three-feet tall platform in the train station is strong enough to stop Ustanak dead in his tracks unless you press A to hoist him up. Why can’t he just run through it automatically? 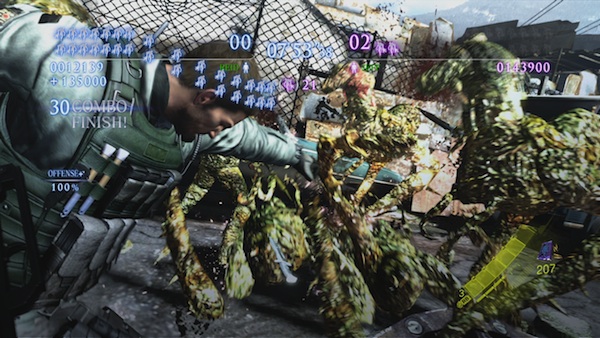 What is it?
Onslaught is a 1-on-1 matchup where you don’t actually get to shoot, or even see, the other player. Instead, you’re both competing for a high score by chaining as many consecutive kills of zombies or J’avo as you can — it’s somewhat similar to Resident Evil 6’s Mercenaries mode. But here’s the twist: These combos not only affect your score, but it also increases the number of enemies that your opponent will have to face. If you suddenly kill 15 creatures in a row, 15 of them will literally drop on top of the other player, and vice versa. You’ll know someone sent them because of a thick green slime that covers their skin (pictured above).

At any time, you can cash in on your existing combo by pressing the taunt button. Otherwise, the enemies are automatically sent if you wait too long to extend the chain (usually a matter of seconds between kills). If you’re lucky and max out your combo at 30 kills, however, the angry mob descending on your opponent will also include a few of the tougher creatures found in the game.

Impressions
It was by far my favorite of the three simply because of how quick the tables can turn during a match. It almost felt like a race as I frantically tried to rack up the highest combo I could make without any mistakes. At one point, 20 J’avo landed in front of me when I was looking for more herbs to heal myself. I was ready to give up until I saw a shiny red barrel hidden among the new arrivals — all it took was one shot and boom! The body count at the top of the screen jumped from zero to 20, and I immediately sent them back for my adversary to deal with. A few seconds later, the game declared me the winner.