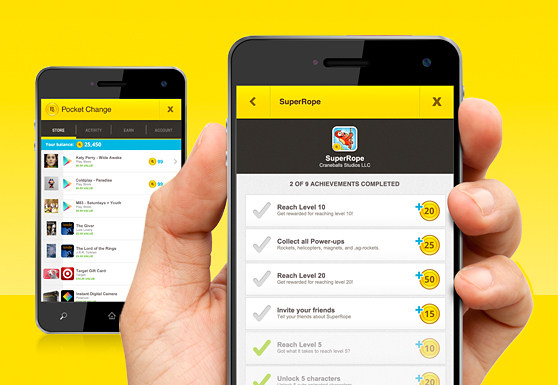 In a bid to make its virtual currency platform more useful for Android game developers, Pocket Change has opened up its platform, allowing devs to give players rewards for any actions they’d like.

Previously, Pocket Change only rewarded players for interacting with an app once a day. Now, developers can give additional Pocket Change rewards for completing a level, inviting a friend to download an app — just about anything.

“Pocket Change is a currency. One of our thesis points from day-one is that what makes a currency interesting is that it has a built-in incentive system,” said Ari Mir, Pocket Change’s founder and chief executive, in an interview with VentureBeat.

With more control over how they can reward their users, developers can tap into Pocket Change’s true potential as a loyalty platform. Additionally, the company has also added an “Earn” tab to its in-game user interface, allowing gamers to see specifically what they need to do to get more points. Naturally, Pocket Change also offers analytics to let companies see how players are interacting with their rewards.

Pocket Change has been operating in stealth mode since Aug. 1, and it only emerged from stealth about a month ago. So far it has rewarded points to more than 12 million users across more than 400 apps. Mir claims that it reaches 1.5 million users a day, and it’s doubling its growth every week. Pocket Change competes with outfits like SessionM, which let developers add gamification features to apps, but differs with its focus on games.

Mir sees the company’s loyalty program as a better alternative to incentivized app installs, which he says “doesn’t help anyone out.” The company is “going to do more incenctivized actions that help the publisher, not just the advertiser.”

Pocket Change’s platform currently only works on Android , but Mir says it may land on iOS in the “near future.”