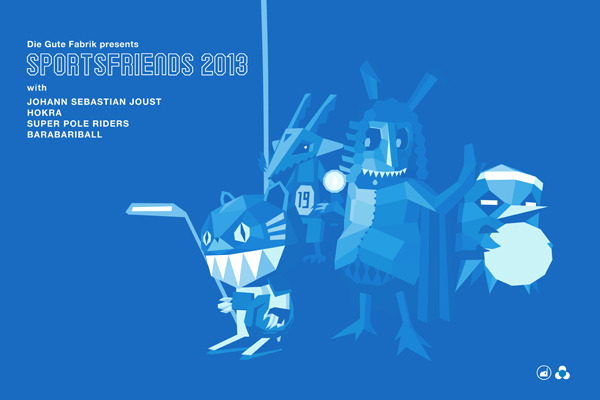 Looks like the world has plenty of friends of Sportsfriends.

The evidence is the multiplayer game bundle’s successful Kickstarter campaign. Over 3,750 supporters stepped forward to fully fund the game, and it came in just under the wire. With only 4 hours to go, supporters pledged slightly over $155,000. That barely puts it over its $150,000 goal.

Sportsfriends is a collection of four competitive multiplayer video games, though one of them doesn’t even have video. The compilation includes Johann Sebastian Joust, Hokra, Super Pole Riders, and Barabariball. With this Kickstarter campaign the Sportsfriends bundle will see these games released on both PC and Sony’s PlayStation 3.

The developers plan to release the compilation on PlayStation Network next fall.

This creates interesting situations with some people trying to avoid other players while others are actively trying to get their opponents to move their controller. It’s an innovative and unique concept that has the air of a made up elementary-school-playground sport.

Hokra is a 2-on-2 team game that is similar to hockey or soccer. Each corner of the screen has a goal and teammates must work together and on their own to score and defend. It features minimalist graphics of simple pixels and colors.

Super Pole Riders is from developer Foddy, the same guy who brought us the bizarre physics game QWOP, and it pits two players against one another in a contest to kick a ball suspended on a rope with a pulley. You need to guide your “kicker,” which is challenging thanks to the hyper-difficult physics, into kicking the ball into the opponent’s goal.

Barabariball features Atari-style visuals in a video sport that combines Super Smash Bros. and basketball. That game is for 1-on-1 or 2-on-2 play. The idea is to fight, kick, and jump in an effort to throw a ball into a watery goal. This can lead to some intense battles. No toss is ever certain, since a player can scoop up the ball just before it crosses the line.