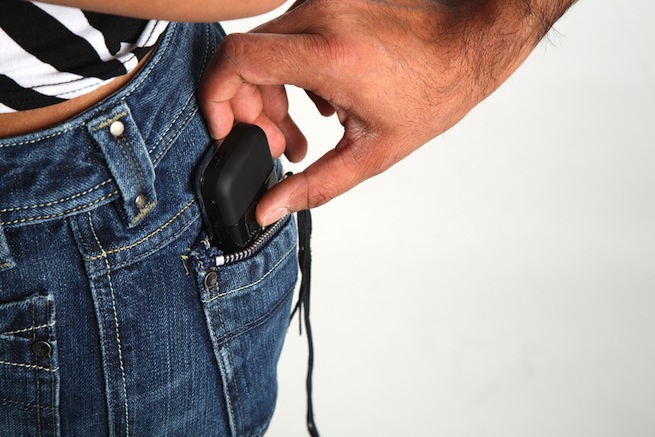 On Thursday at 8:30 p.m., I was mugged at knifepoint in downtown San Francisco.

I must have appeared to be the safe target: In one hand, I carried an expensive-looking tote bag, and in another, a pair of strappy sandals I had planned to wear to a holiday party that evening.

Within minutes of ascending from the BART station, the small gang approached me. From the corner of my eye, I caught the glint of a small metal object. The oldest in the group, a skinny teenage boy in a wool beanie, demanded my cellphone. To his unabashed delight, I handed over a brand-new iPhone 5; satisfied, he and his pals scuttled off into the night.

In San Francisco, a city filled with commuters and tourists, iPhone owners are walking targets for thieves. According to the National Mobile Phone Crime Unit, a cellphone is involved in over half the street crime in the United States, a statistic that is likely far higher in the Bay Area. We frequently pull out our smartphones to check email, get directions, or play music, totally oblivious that we’re putting ourselves at risk for petty and violent crime. These devices are so ubiquitous, and we rely on them so much, that we often forget basic safety protocols.

I recall racing down the city streets after my muggers, screaming profanities, enraged about the loss of my most prized possession. It sounds crazy, but I half-believed that one look at my mascara-streaked face and they would understand that all my music, contacts, sensitive work information — my life — was contained on that candy-colored device.

The two cops who subsequently showed up to take my statement were nonchalant. My story is far from unique. Police estimate that cellphone theft is becoming more prevalent in the run-up to the holiday season. People are unknowingly purchasing stolen phones as gifts, and buses are brimming with easy targets, such as drunken holiday partygoers and shoppers laden with heavy bags.

The most common robberies are the “snatch and grab” kind, where cellphones are pried from the hands of commuters. In San Francisco, police launched a transit ad campaign, warning folks to “be smart with your smartphone.” Similar warnings went out in Oakland, where the police reported nearly 1,300 cell phone robberies this year alone.

“iPad and iPhone theft is the most common because there is a market for it,” said Jason Hui, an San Francisco Police Department patrolman working in one of the city’s residential districts. Given the prevalence of iPhone theft, Hui and many of his colleagues have become self-taught experts on cellphone tracking. Many smartphones are equipped with cloud-based GPS technology that helps the police track stolen devices, wipe sensitive data, and even set off an alarm.

Hui points out that there is a thriving underground market for these devices, but many stolen phones are sold on legitimate sites online. On Craigslist, perform a simple search for “iPhone 5” and you’ll find dozens of listings for new and nearly new devices that sell at close to retail prices. My barely-used phone will likely net over $600. And for deal-seekers who purchase a phone on a site like eBay and Amazon, there’s almost no way to discern whether it’s a stolen device.

“Many of these phones [sold online] change hands multiple times,” said Hui, who explained that you’d need a search warrant to track the phone’s electronic serial number to determine its original owner. If you’re considering buying online, one user guide post on eBay advises the following:

Many sellers, especially those with little or no feedback, will say, “I can’t display or tell you the phone for security reasons.” That’s nonsense — you need the ESN [electronic serial number] to make sure the phone is not stolen or lost and found (which many of them are). Phones that are stolen or reported as lost have the same effect: they can’t be activated; that ESN is dead. If they (the seller) refuse to give you the ESN then don’t bid or buy.

San Francisco’s authorities view cellphone theft as a grave — but resolvable — problem. On Tuesday, the police will launch a committee hearing to discuss ways the public can protect itself. Scott Wiener, a member of the San Francisco Board of Supervisors, will lead the hearing.

Wiener revealed to SF Appeal that he was particularly concerned about a spike in thefts in residential neighborhoods during daylight hours — “very scary incidents,” he said. 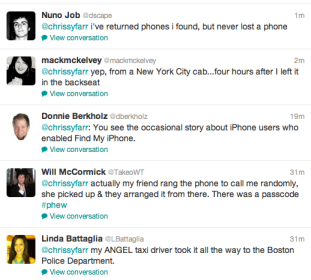 “I often use the analogy that you wouldn’t walk down the street carrying two, three hundred dollars withdrawn from an ATM,” SFPD police chief Greg Suhr said in a recent media interview.

Suhr stressed that the silver lining is that, with tracking technologies and the aid of the general public, the police “often get [cellphones] back.”

Feeling skeptical and somewhat cynical, I tweeted to an audience of several thousand Twitter followers, asking about lost or stolen phones that were subsequently returned. Within minutes, I received dozens of short stories about how lost phones eventually made their way home (see a snapshot of the responses, left). San Francisco resident Ashley Mayer told me she was able to retrieve a stolen phone when a random taxi driver went into “Hollywood car chase mode,” and followed her muggers through South San Francisco’s bustling streets. It’s a thrilling story — read Mayer’s blog post here.

Miracles and random acts of kindness aside, there are several ways to recover a lost or stolen smartphone, or at least limit your damages.

Ways to wipe data, track, or disable a lost or stolen phone

Apple users: Sign up with iCloud and use the “Find my iPhone feature” to search for a device as it moves through the city. If your phone is missing, do this immediately as GPS tracking will not work if the phone is switched off.

Android users: LookOut Mobile lets you remotely lock your phone from the web to keep out prying eyes. Cool features include a “scream” button designed to help you find a missing phone (and freak out robbers) and a signal flare that automatically saves its last location when the battery was low. The “wipe” capability will ensure that sensitive corporate data never sees the light of day.

Lose a company-issued phone? Zenprise, a red-hot mobile security company acquired by Citrix, works with large organizations like the Boston Red Sox to ensure its employees won’t jeopardize sensitive data. IT departments will be alerted if an employee’s phone gets hacked, and they can wipe data from any device remotely.

Pick one of the leading wireless carriers: The big four — AT&T, Verizon, Sprint, and T-Mobile — launched a database in November to track, report, and block stolen devices. They claim this will prevent stolen phones from being used on these carriers’ networks.

In the aftermath of my mugging, police relayed to me the following precautions:

The only way to stop the demand for stolen smartphones is for the major carriers to render such phones as useless as an empty wallet and for the police to continue cracking down on crime. In Europe, stolen phones are blacklisted based on their 15-digit International Mobile Equipment Identity number. Read more here about phone blacklisting, and why it’s a losing proposition in the United States.

In the meantime, stay vigilant this holiday season, San Francisco.