Alex Marcolina is a game design student based in California. He impressed the gaming community when he recently released Portal Prelude for Texas Instruments’ Ti-83 and Ti-84 graphing calculators. It pushes physics, graphics and animation on a very limited piece of hardware through 38 Portal-style test chambers. Portal is a first-person view puzzle platformer game for consoles and PC by Valve Software.

A community of hackers, coders and mod-makers to specialize in creating games for Texas Instruments’ calculators, but those are usually based on much simpler concepts like Pac-Man or Super Mario Bros.

Known as Builderboy 2005 on Reddit, he posted a link to his game, and it wasn’t long before it grew in popularity around the Internet.

Marcolina took some time out of studying for finals week to talk to GamesBeat about his project.

GamesBeat: Why did you choose Ti-83/84 to re-imagine Portal?

Alex Marcolina: The Ti84 was the first platform where I began my interest in game programming, so I will probably always have a little bit of an attachment for it. Plus, I always say that programming for such a restrictive platform really forces you to be creative and work harder to get your work done. If you program something simple for the computer, even if you program it badly it will still run quickly, whereas with a calculator, you need to work extra hard in order to make your code run at a reasonable speed.

GamesBeat: What was the challenge about working with such limited hardware?

Marcolina: The largest challenge with working on the Ti84 was mostly the memory constraints, especially the fact that at most I can have 16K of executable code, which is a really hard restriction when you have as much animation and physics as Portal does.

GamesBeat: What’s the particular challenge in taking a 3D environment and turning it into a 2D world — and making it work?

Marcolina: The largest challenge with the conversion to 3D is that puzzles could not be as complex, and you really had to work hard in order to make everything fit nicely on to the screen. Level design was definitely the part I spent the most work on for this project.

Marcolina: Not that I know of, but it would be awesome if they did!

GamesBeat: What made you choose Portal, aside from it being a game you enjoyed?

Marcolina: Probably the largest influence was the fact that when I was originally learning to program on the calculator environment, I was programming in TiBasic, which was a lot slower than the current language I am using, Axe. My very first game I released in TiBasic was another Portal game! It was incredibly crude and had no concepts like momentum, cubes, buttons, or anything like that. But when I first learned Axe, I thought it would be both awesome and fitting if my first Axe game was Portal as well. 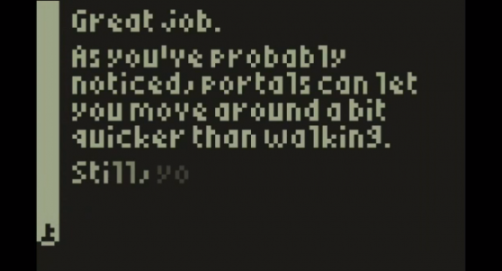 GamesBeat: You said you worked on this for several years. What were you thinking when you started? Was it something you just did on any available off time you had, or were there periods that you wouldn’t work on it at all?

Marcolina: Most of the games I work on get worked on in my spare time. Consequently, most of my projects can take more than a year to complete, or not even be completed at all! When I started, I was just kind of going with the flow, and waiting to see if my idea actually had the possibility of becoming a real game, or if it would just be a small project I played around with for a bit.  Once I realized that the game could actually be finished, I started working a lot more on things like level design and story.

GamesBeat: Was there ever a point when you questioned continuing the project?

Marcolina: Yes. There actually was a point in time where I abandoned the project for around half a year, due to being super busy and other things. I technically handed off the project to another, but in he only ended up contributing ideas and inspiration for the final product, and was half the reason I decided to pick it back up.

GamesBeat: Do you develop for any other platforms?

Marcolina: I do program for the PC in my spare time as well, and I am interested in making apps for Android or the iPhone.

GamesBeat: Are you planning any other games?

Marcolina: I tend to work on many projects simultaneously. I work on whatever catches my interest at the current time, and consequently I have probably half a dozen unfinished games or projects right now. Some might be abandoned, and some might be picked up later to be finished. Currently, I have no major projects I am working on, and I am just taking a nice break from finishing Portal.

GamesBeat: Are you interested in game development as a career?

Marcolina: Absolutely, I am currently perusing a degree in computer science: game design at the University of California, Santa Cruz. Game design is what I love to do, and being able to do it as a career would be the ultimate dream come true!