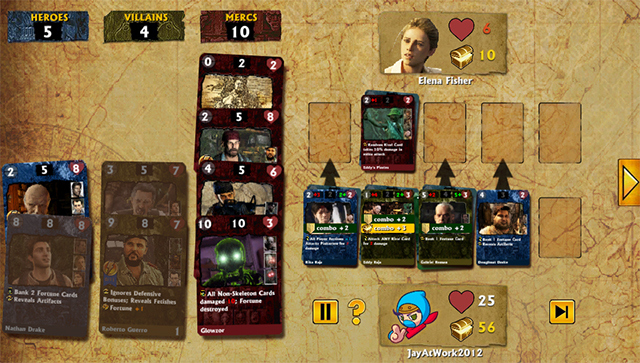 After four adventures in third-person shooting, Uncharted finally branches out to another genre. I’m just a little surprised it’s a card game. Well, at least it’s not a kart racer. (Actually, Unkarted kind of sounds awesome.)

Instead we have Uncarded (I refuse to stop with the puns), a $5 downloadable available now for the PlayStation Vita. Well, I’m a pretty big fan of the series, so I’d probably buy a can of anchovies if it had Nathan Drake’s face plastered all over it. But that doesn’t mean I have to like it!

But I did. Like it, I mean. The card game, not the anchovies.

Familiar yet unique mechanics
Fight for Fortune takes inspiration from other, more famous card titles, notably Magic: The Gathering. You basically use a number of cards representing Uncharted’s heroes, villains, and mercenaries to defend yourself and attack your opponent. While each character has his own independent health bar, players have their own hit points. Once a character dies, he’s gone from the match, leaving you vulnerable. The first person to deplete the other’s HP wins.

That’s the simple, familiar part, but Fight for Fortune is a lot more complex. You can only enter one character into battle each round, which depletes a resource that regenerates by one before your turn. These cards include heroes, villains, and mercenaries, and they each have their own resource pool. Stronger cards require more points to enter play. 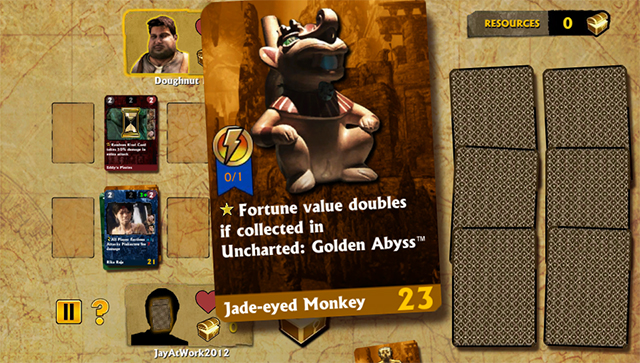 So while it may hurt you early on to play a bunch of weak villain and mercenary characters in the beginning, you’ll eventually be able to use a really strong hero card.

But fortune is the most important resource as it lets you use special cards that can upgrade your characters’ health and strength or just directly attack an opponent. You earn fortune through artifacts — yet another type of card that you can attach to characters. Each artifact awards a certain amount of fortune, which you can only bank after the hero, villain, or merc holding on to the artifact kills another character.

Wait! I’m not done explaining! But if a character holding on to an artifact gets killed by someone else, then the killer gets to bank both his and his victim’s fortune. That’s the risk/reward aspect of the game.

OK, so this probably sounds complicated, but it’s really not. Since this is a digital card game, the Vita takes care of all that troublesome math. (I’m a writer, damn it! I can math about as well as I can hit home runs, which is not very.) You just sit back and play whatever cards you can afford, using your smarts to try to set up scenarios that will reward you with the most fortune.

Kill Nathan Drake with cards
Fight for Fortune has a campaign of sorts, basically pitting you against a number of A.I. opponents representing the famous Uncharted cast, like Elena and Sully. Beating them awards you with a new card, and you can challenge them again a few more times with slightly different rules and harder difficulties to earn more. 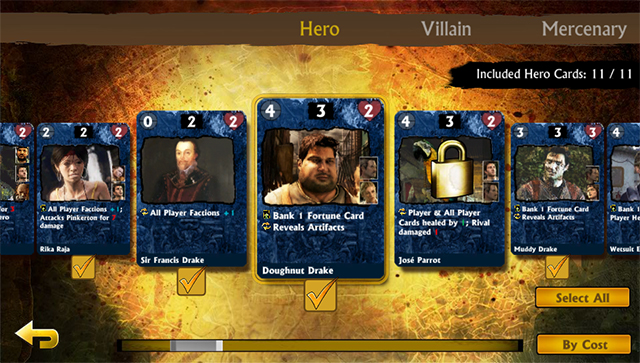 It’s not the most in-depth single-player mode, but the constant stream of unlockables make it rewarding to play. The A.I. works as a decent opponent, usually putting up a good fight without seeming to cheat.

Multiplayer options
You can pay against friends simply by passing the Vita along to whoever’s turn it is. If your buddy happens to own his own Vita, then you can each play on your own portable either through a local connection or via Wi-Fi. You can also use the online multiplayer to tackle strangers.

Interestingly, you can have up to eight online matches going at once, so you don’t have to sit around and wait for your opponent to take his turn.

It is what it is
I don’t really have anything outwardly negative to say about Fight for Fortune. It’s a fun little card game, and that’s pretty much it. If you’re hoping for an experience that will match the epic nature of a real Uncharted game, then you’ll be disappointed. It’s sort of hard to replicate an escape from a collapsing, burning building with a bunch of digital rectangles. 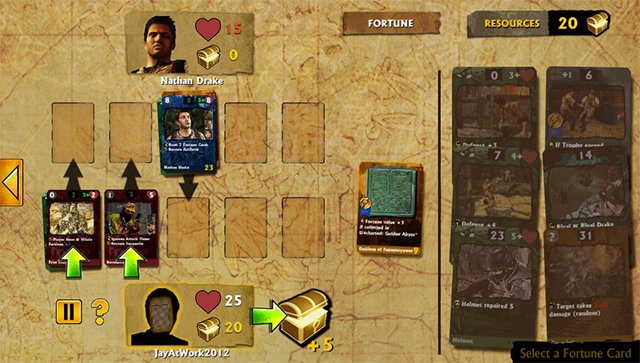 If you’re looking for a fun distraction and you’re a fan of the series, then Fight for Fortune will tickle your treasure-hunting fancy. Besides, it’s not exactly a risky purchase at $5. Let’s not forget that the Vita hasn’t seen a surplus of excellent releases lately, so this is a decent excuse to keep charging your expensive portable’s batteries.

Uncharted: Fight for Fortune was released on Dec. 4 for the PlayStation Vita. The publisher provided GamesBeat with a download code for the purposes of this review.