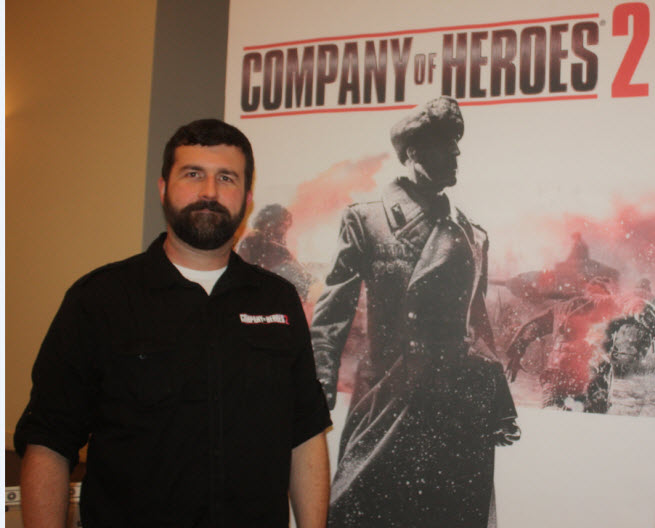 THQ has a lot riding on Relic Entertainment’s Company of Heroes 2. The real-time strategy (RTS) game is a sequel to the top-selling 2006 title, Company of Heroes, and it should make strategy fans happy when it debuts in the spring of 2013. But THQ is out of money, and it needs every title it launches to be a success. Quinn Duffy, the game director at Relic, shakes off the pressure and says that the company is working hard on polishing the game.

Relic recently showed off the multiplayer version, where “every battle tells a story,” as Duffy puts it. The PC game is set in the Eastern Front in World War II, where the Soviets clashed with the Germans and millions perished. It includes cool features such as blizzards that can kill your troops, destructible environments like cracking ice on frozen rivers, and detailed 3D imagery.

The title has been delayed a couple of months, but you can still expect it to come out early in the year. We caught up with Duffy at THQ’s recent multiplayer event in San Francisco. 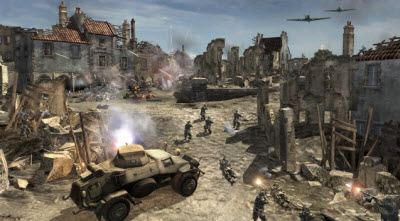 GamesBeat: What’s your approach to multiplayer in this game? What might be different from the first time around?

Quinn Duffy: We have a similar approach, I think. We’re trying to deliver on a tone and an experience. What we did differently with this game, right from the beginning, was rethinking our creative vision. One of the things I loved about the original was how, in multiplayer, we had this concept that we coined called, “Every battle tells a story.” We wanted to make sure there was ebb and flow and comeback. Cool moments to talk about. A real narrative developing, even in the multiplayer experience.

These battles have their own little stories. When we finished playing a game, we’d get up and talk about the stuff that we did, the things that we saw, the cool pieces of emergent stuff that happened with physics. A building collapsing or whatever. It made it feel like a more social experience. That was something that we embraced wholeheartedly. We wanted to deliver a game that, when you have two evenly matched players, it should feel like a battle. You don’t know who the victor is going to be.

GamesBeat: If you want to become a good player, what are the things you’re paying attention to?

One thing was reducing a bit of the mindshare on the resource side of the game and putting more focus on tactical gameplay. That was one reason we reduced the number of points and changed the resource system. We wanted to put that focus on tactics. I think that’s more fun. Resource management is a means to an end. I want to be flanking guys and throwing grenades. 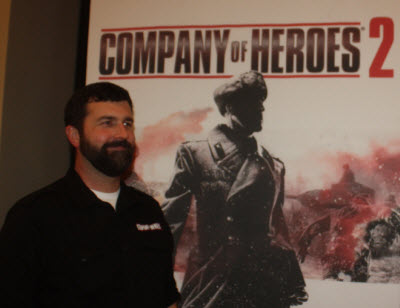 GamesBeat: With RTS games, one of the things people always have to face is the strategy of the early rush, the Zergling rush from StarCraft. Is that a tactic that’s easily executed here, or easily countered?

Duffy: The bases have built-in defenses. There’s a measure of protection right from the beginning. We have a lot of systems in the game that are designed to counter blobs, large numbers of guys. A machine gun will suppress 100 infantry as easily as it’ll suppress six. Those are systems that can be used against early mono-unit armies. If you just send in infantry, I can get out a unit to counter that. It’s a game where being aggressive helps and expanding helps, but early rushes tend to not be super effective.

GamesBeat: If it’s not an early rush, then, what is something that is a way to start out and get yourself on the right foot?

Duffy: I still like this philosophy of combined arms. I try to build weapons that can support each other. I try to put a mortar with a machine gun, so I can pin guys and then drop mortar bombs on them. You have the ability to create a large number of casualties with an efficient use of units. The goal of the game is to end up with enough units to get the big tanks out onto the field, but infantry always play a role. They’re always a potential counter to tanks. You need them to capture territory. You need them to capture victory points. If you don’t have infantry, you’re going to lose.

GamesBeat: I was always trying to make sure I won the first encounter, so I’d throw everybody I had at that one location where the first contact happened. Then I would spread out again and try to take as many points as possible. It was sort of a trick to make me seem bigger than I was.

Duffy: Yeah, it’s like those little animals that puff up. [Laughs] If you’re in multiple places, they don’t know if you have one army that’s really mobile or if you have a bunch of guys all over. That’s de facto tactical stuff. I’m the same. I try to keep a little bit of pressure on all the time. I send somebody out to see what you’re doing. I don’t want to be surprised. I’m going to keep you on your back foot as much as I can.

GamesBeat: Eventually that runs out, though. It works for a little while, but then you run out of people, and you have to go back to building stuff.

Duffy: Yeah, you can. One of the things that’s important in the game is preservation. Even on the Eastern Front. It’s cheaper and faster to bring a squad back and reinforce than it is to build a whole new squad. If you’re rotating, you can maintain a pretty good-sized force. It allows you to get a good basis for building up. Think of something like a conscript. They have the ability to get antitank grenades and Molotovs. If you get a number of those guys in one spot with the ability to throw grenades, and you have the resources to support them, they can be a really powerful force. 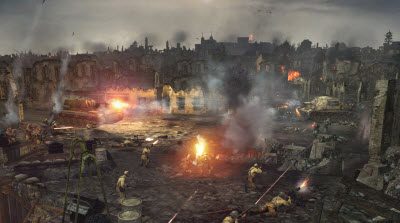 GamesBeat: Is there going to be a way to hand-hold people into the game, with tutorials and things like that? Do you play the single-player in order to learn how to play multiplayer?

Duffy: For sure. The campaign introduces players at a measured pace. It’s not really about button presses. It’s about learning how to play the game, about what it means to flank or to use line of sight. The tutorials work in much the same way. We’re doing a whole bunch of videos that players can view. Those teach them how to play the game bit by bit, from basic to advanced tactics and strategies. There’s a number of ways that we’re looking to use to bring the players in. Even things like automatch, making sure that they’re automatching against somebody of comparable skill. We want to make sure you go up against somebody that’s going to give you a fun experience.

GamesBeat: The user interface must be a little hard to design. There’s so much information. You can overload people, to the point where they might not notice certain things.

Duffy: Yeah, it’s a risk. Too much information is just as bad as not enough. We rely to a degree on a lot of the visual presentation of the game. That delivers elements of the cold. There’s UI [user interface]. You can put in the thermometer dropping and show when guys will start to freeze. But there’s also the audio and the animations. They’re playing their cold animations. That makes them feel more like real units, and it gives you valuable feedback, too.