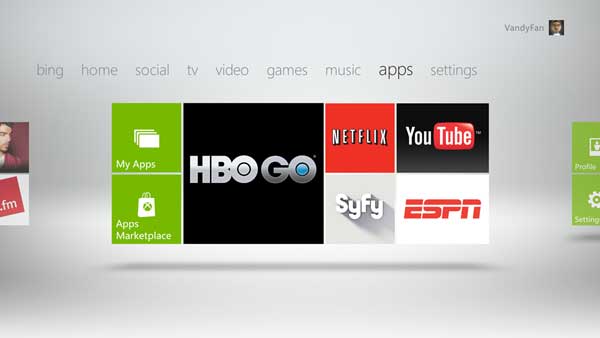 Microsoft recently launched 20 new apps on Xbox Live. But between now and the spring, the company will launch 40 more apps. Clearly, the apps show that the console isn’t just about video games anymore. It’s a gateway to all kinds of Internet entertainment.

The apps are listed below:

ARTE (Germany, France)
With the ARTE app on Xbox Live, you can watch an exciting mix of content from the Cultural TV station including documentaries, concerts, and movies.

CinemaNow (Expanding to Canada)
CinemaNow is an Authenticated Video on Demand (AVOD) application, providing customers with access to TV and movie content previously purchased on CinemaNow.com.

CNET (United States, Canada)
CNET offers all the product reviews, technology shows, and event coverage you love, now on Xbox Live. CNET helps you use technology to enhance and enrich your life. From specially curated content to advice, it’s everything you need to buy and get the most out of tech that’s right for you. Get the best in technology, right where you want it.

Karaoke (All Live regions, excluding Japan and United Arab Emirates)
Karaoke provides access to more than 8,000 songs from the latest hits to the oldies but goodies, available on Xbox Live. Your avatar will go on stage and sing with a full complement of stage props and back band. Use SmartGlass to play/stop/pause, browse the database and lyrics, or to add songs to the playlist. Songs don’t require any download and will playback immediately via streaming for a robust karaoke experience.

Napster (Germany, United Kingdom)
With your Xbox and Napster Unlimited plus Mobile, you can play millions of songs instantly. Listen to millions of songs in various genres, play as much as you want, enjoy hours of expertly programmed music. Discover new releases, charts, and much more.

SkyDrive (All Live regions)
SkyDrive is the place to store your files so you can access them from virtually any device. With SkyDrive for Xbox, you can easily view your photos and videos on your TV. You can also play slideshows and view photos and videos shared with you. For more information, visit the Inside SkyDrive blog.

VEVO (Expanding to Spain, Italy, and France)
With over 45,000 videos by 11,000 artists, VEVO is the world’s leading all-premium music video and entertainment platform. Stream live concerts, watch exclusive programming, and queue up all your favorite videos. VEVO is available in the United States, Canada, and United Kingdom. The VEVO app for Xbox includes high-quality on-demand music videos free to the user and allows social interactions between fans, VEVO, and users.

You should be able to download these apps from the Xbox Live marketplace starting today. Give it some time though, we’re rolling out a lot of apps at once, and it may take a day or two for all the apps to arrive. We will keep you updated as more of the world’s leading entertainment providers come to Xbox.