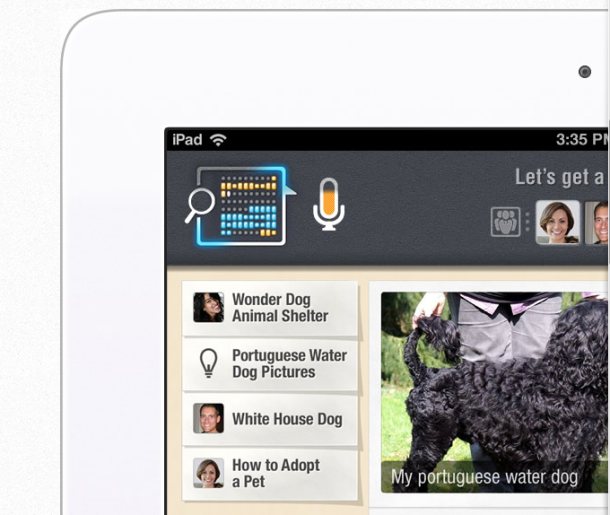 We’re now getting the first taste of a world where our computing devices fetch us relevant information without our asking. Google Now is the most notable example; it’s Google’s Siri-esque competitor that can learn from your daily routine and parse information in your e-mail.

In that same vein there’s Expect Labs, a small startup that’s been working on an “Anticipatory Computing Engine” that can understand conversations in real time and deliver relevant information to you. Today the company announced that its technology is getting a big accuracy boost with the addition of Nuance’s voice recognition technology, which also powers Siri, Google Now, and most other voice-recognition implementations.

“I really think, in the next 10 to 20 years, that the huge changes that we’re going to be seeing in software are really around becoming more intelligent,” said Tim Tuttle, the chief executive officer of Expect Labs, in an interview with VentureBeat. “It’s inevitable, and the way we’re going to use computers then will be fundamentally different.”

In that futuristic world, Tuttle predicts, we’ll be interacting with some sort of computing device every waking minute, and those devices will need a way to determine what you actually need. So Tuttle, who has a background in Artificial Intelligence, spent the past two years in stealth working on building that platform for the future with Expect Labs.

To show off its new tech, the company developed MindMeld, a group video chat app for the iPad that listens to your conversations and pushes useful information to the participants. One portion of the app is your typical video chat window, but you can hit a button to tell it to start listening to the conversation and collect useful information. So if you’re chatting with friends about seeing a movie or going to a restaurant, the app will pull up movie listings and restaurant reviews for all of you to see. (Check out Tuttle’s demonstration of the app below.)

With the Nuance partnership, Expect Labs will integrate the Dragon Mobile SDK into MindMeld, which should make it even better at voice recognition. It expects to release MindMeld to the public early next year.

It’s not hard to imagine the far-reaching uses for Expect Labs’ technology. It could eventually power an evolved form of Twitter that keeps track of all of the topics we interact with daily. So if a friend recommends an article to you, it’ll automatically get logged for you to revisit later. Now imagine that functionality combined with Google’s Project Glass — it could be infoporn heaven.

After emerging from stealth mode in September, San Francisco-based Expect Labs was chosen as a finalist at TechCrunch Disrupt’s Startup Battlefield. It also raised $2.3 million in funding from KPG Ventures, Google  Ventures, Greylock Ventures, and others.

Check out a demo of MindMeld below: